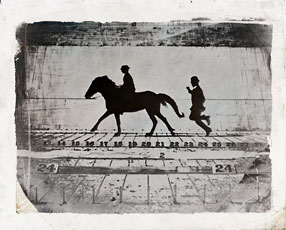 This Friday, I made it up to the City for the Muybridge exhibition at SFMoMA. My interest in animation, that I straddle the two worlds of art and technology, and my local pride (both Bay Area and Stanford in this case) have all made me a Muybridge fan for a while.

As a fan, I had already read River of Shadows and One City, Two Visions well before I even knew about this exhibition. As a result, I was relatively prepared for what I was to find—namely a very detail-oriented experience. Unlike most photography exhibitions where you see numerous large prints and often end up defaulting to the immediate wow factor of those prints, Muybridge demands more time and attention.

There are rooms of stereographs. These take lots of time to look through since you have to use the supplied stereoglasses to look at them.* And it’s worth doing so since quite a few of the images only work in 3D and were obviously shot with that intent in mind. Is neat to see images which doesn’t make sense until the 3D effect pops into place. I’m glad SFMoMA displayed them the way they did. All too often, that these are supposed to be viewed in 3D is lost in how they’re displayed.

*Too many museum patrons didn’t understand the concept and treated them like magnifying glasses. If people don’t get 3D photography, I fail to understand the optimism for 3D television or movies.

There are also rooms and rooms of motion studies. Again, attention to detail is rewarded here. Certain frames of a given study are fascinating (e.g. the upswing of a flying bird’s wings or the bounce in the fabric of a jumping woman’s dress) but you have to find those frames out of the dozens on display. Also, it’s very informative to see photos of his setup and how the cameras work. The exhibition also makes the point that the next logical step after making the motion studies is to reanimate them

The rest of the exhibition consists mainly of his mammoth-plate work and a trip to Central America. Mammoth-plate shots are interesting in that they feature more-modern compositions but are still low-contrast albumen prints. And I really liked his Central America shots. Smaller-format images (~5″x~9″ prints/negs) which felt a lot more dynamic than anything else on display.

Also at the museum is an exhibition on Paradesign. Some of the work is clever, some if it is too clever, the rest isn’t clever enough. Like most new art, we still haven’t figured out which 5% is any good.

I did enjoy the works by Constantin Boym and Laurene Leon Boym called Buildings of Disaster. It had the right mix of cleverness, irreverence, and subtlety to appeal to me. I studied these for a long time and just shook my head at the number of people who looked but didn’t see.

I also enjoyed the works by Tobias Wong for much the same reasons.

5 thoughts on “Muybridge, Muggeridge, and Helios”