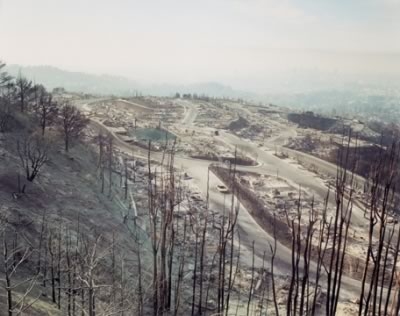 My grandmother’s house is at the base of the Oakland hills.* We drove through the hills to get there for holidays and visits and there’s always something very comforting about that area as a result. It’s not where I grew up, but there’s a similar comfort in knowing and seeing where my father grew up.**

*Even though someone else has lived there for over a decade, it will always be my grandmother’s house.

**I have similar feelings about Kane‘ohe even though I visited there far less frequently.

I still remember the fire in 1991—both in terms of watching the news and then driving through the neighborhood soon after for Thanksgiving and Christmas. Watching the fire was scary and worrisome. Even though we knew she was okay, we were watching to see if our roots survived. While the house and immediate neighborhood did (being surrounded by the Claremont Country Club), we still had no idea what the greater area would look like until we drove through it later.

That they’re being displayed first in Oakland and Berkeley sort of forgives the one major fault of the exhibition. There are no pre-fire or post-reconstruction photographs available so we have to rely on our own memories or commit to driving up Broadway after the museum visit. But by being displayed first to locals, it’s likely that there will always be someone in the exhibition who can make it personal.

There is a memory wall which does alleviate some of this, but I still found myself directly comparing this exhibition to Gohlke’s work with either the aftermath of the Wichita Falls tornado or the Mt. St. Helens eruption. Gohlke is great about demonstrating a lot more of the cause and effect both in single frames as well as multiple frames from the same location over the years. The most I get a sense for this in the Misrach exhibition is the noticeable motion blur in a number of the frames—the wind which fed the firestorm was still whipping through the area.

I also, as a Bay Area native who expects to be wiped out via earthquakes, couldn’t help but appreciate how fire takes all of the house except the portion which earthquakes take first. Wood rides out earthquakes pretty well, stone and brick chimneys don’t. And yes, I know that the chief danger during an earthquake is still fire. 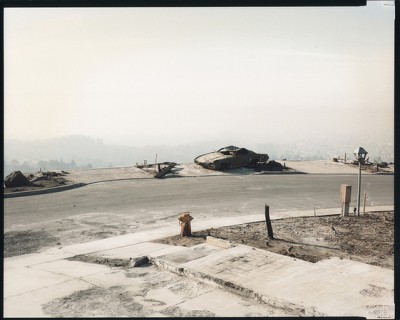 Two photos which struck me most. The car at the edge of the world. There’s always something striking about what remains in a landscape when everything else is taken away. In this case, you can also see how precariously those houses must have actually been on the hillside and you can see how the view must have looked before we began building there. There’s also a much closer shot of just the burned-out car showing how everything flammable has been consumed. I prefer this shot with the context but the two together* work well.

*And really, how often do you see two shots of the same subject taken at the same time presented together?

The melted tricycle. This one gets to me on many levels. It’s probably the most ruin-porn of the photos. But then the subject matter is also the most emotional. We’re always going to react strongly to a kid’s toy. It also reminds me of William Eggleston’s tricycle and the idea that these kind of photos can be art.* Plus this photo is one of the few which still maintains any sense of color. Everything else is neutral. It’s all been burned or covered in ash and soot. But the tricycle still pops.

*That it’s also the cover of the exhibition catalog suggests that I’m not the only one to make this connection.