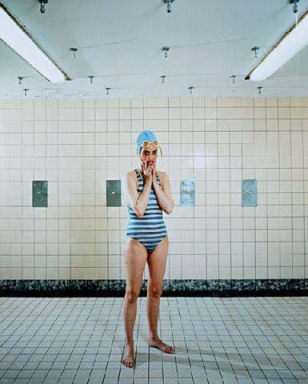 Part four of my trip to SFMoMA. Yes, I went to see Bradford and collect my prize, but I’m still mainly a photography guy so I was most looking forward to seeing Rineke Dijkstra. It’s a good exhibition. Not sure how I feel (in a like/dislike way) about the actual art. But I did react strongly to it—which is saying something.

The concepts behind the photos are interesting and fascinating—people in personal transition: teenagers, new mothers, soldiers, migrants, etc. The photos though—despite their size—need to be seen as groups and require explanatory text for the relevant context.* While each image invites scrutiny of its individual details, those details only matter when compared to its companion images. Catching similar postures between teenagers. Seeing how a refugee ages. Noting the differences that a vaginal birth leaves on a new mother’s body when compared to a caesarian. Finding the mosquito on the forehead of one of the bullwrestlers. But as individual images? None of them really caught me and they all give me more an impression of the photographer rather than the subject.

*Context would be the theme of the day.

Which is an impression I was aware of in this exhibition more than in any other exhibition of portraits I’ve seen.* I constantly found myself conscious of the photographer and wondering about the interaction which occurred during the portrait or video session—especially the video sessions.

The video works are engrossing as they teeter on the edge between being voyeuristic or complicit. They are ostensibly just a single teenager on-camera reacting or dancing to the music being played. There is much more going on though and it’s fascinating to watch the transformation from awkward teenager in front of the camera to a fully-committed dancer. Watching, while I can sense how it takes a bit to get into the music, I can also see other interactions going on in the studio and I can’t help but wonder what is being said off-the-record to coax a better reaction or performance out of the teen. There’s also something bit sketchy about watching the exercise.

The photos kind of feel the same way. There’s something vaguely intrusive about them which made me wonder how the portrait shoot itself went, how she asked for permission, how the sitters felt about the whole thing, and whether they like how they’re being displayed worldwide as art.

At the same time, there is something deeply true about Dijkstra’s work. We’ve all been teenagers and should remember how awkward everything is then. And how most of us hated posing for photos at the time. We’ve also all had traumatic experiences and know that recording our physical state at that time reflects a very different personality than we usually present.

Looking at Dijkstra’s work, I found myself looking away from them as much as I looked at them. These aren’t easy things to look at since they’re very raw. The photos may not be empathetic, but the directness of them cuts through a lot of crap to present us things we recognize and empathize with. No cheap tricks here and the consistency of her approach to each sitter* works well when seeing everything as a group. No one is intended to be embarrassed and the fact that the collected works point back at the photographer herself** takes some of the burden off the subject.

*Each photo in the exhibition is remarkably similar in technique and style.

**That the exhibition begins with a self portrait—and that it ends at the same self portrait since you exit where you entered—is a brilliant bit of curation.