The Best White North American & European Photographers (with Minor Exceptions) of the First 1/8th of the 21st Century: prisonphotography.wordpress.com/2012/09/25/the…

I have to admit that I was thinking about this as I filled out my contribution but did absolutely nothing to address it. This is mainly because I’m not that into the bleeding edge of photography and tend to glean what others come across. So since everyone I follow tends to promote western photographers, that’s all I really see.

I also don’t make a habit of checking a photographer’s background. I know, I know. I’m on record as saying that the identity of the photographer matters. But it’s not a race thing I’m talking about. All I’m interested in is whether the photographer is an insider or an outsider with regard to the subject matter being depicted.

And besides, given how I interpreted the challenge, I was moving away from subject matter which implied a specific background and into conceptual items where I truly don’t care who the photographer is.

In any case, I’ve gone back and thought about it a bit more and picked two non-white photographers who I’m familiar with but who don’t seem to be part of the larger photographic discussion. Neither made my top-five list but they’re both doing work which is relevant moving forward. 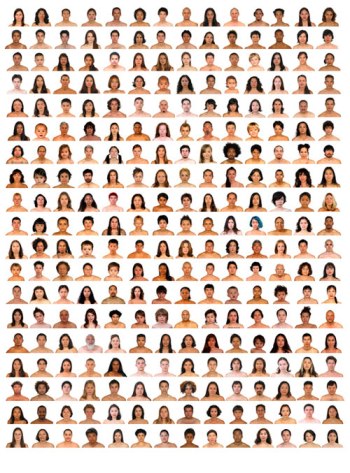 Kip Fulbeck
Fine. Sort of non-white. Fulbeck is responsible for the Hapa Project and for the book Mixed Kids.* He plays with the concept of race itself and looks towards our racially mixed and ambiguous future. I don’t find the individual portraits to be that noteworthy by themselves. But taken as a group, the projects are very noteworthy and manage to tread the fine line between how mixed-race people tend to take pride in forging their unique identity while feeling somewhat isolated and not part of any specific ethnic group.

*The first artbook in my three-year-old son’s collection.

We* all have our different stories of passing for various things but not necessarily feeling 100% part of any of them. So it’s nice to have company and see how other people are doing the same thing.

*I’m Japanese, Chinese, German, and Irish. My sons are all that plus Mexican.

Binh Danh
This appears to be a very local choice. I’ve seen his work all over locally but never beyond that. And I’ve yet to see anyone play with the photographic process the way Danh has with his leaf prints. The concept is interesting enough that it could appear to be a gimmick. But he uses the right leaves and right images and is able to evoke a sense of history and loss and memory about Vietnam and the Vietnam War which makes his work quite powerful.

He’s moved on to taking daguerreotypes and developing them in his van—resulting in images which we’re not used to seeing as daguerreotypes since they’re recorded in the field. I’ve seen a resurgence in tintypes and mobile tintype studios. Daguerreotypes up the ante though. Again, this could be a gimmick but Danh knows what he’s doing. The high reflectivity of a new daguerreotype is not something we’re used to. So he takes photos and presents them knowing and intending that the viewers will see themselves as they view the pieces. The resulting photos are a combination of something old and something very new—making us rethink what we’re seeing.

7 thoughts on “Towards the 21st Century—Addendum”