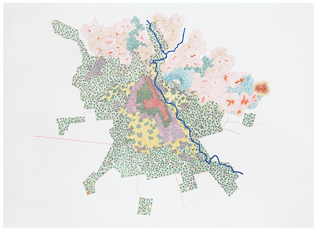 More of this please.

My fondest memories as an art appreciator involve discovering emerging art and artists without having any preconceived ideas about what I was going to see. It’s why I like the San José Museum of Art. And it’s why I have such fond memories of Venice.* Most of my museum going gets caught up in seeing things I have to see. Heck, I don’t even make to all of those. But as a result, I often don’t get around to taking the risks required to see any new stuff.

*I spent so much time exploring Biennale that I never made it to the Peggy.

Which is why it’s nice when a museum has new stuff right there with all the must-see exhibitions. I made it back to SFMoMA recently to catch Cindy Sherman one more time before it ended* and made sure to allow enough time to see the new show Six Lines of Flight. It was worth the time. I haven’t seen this kind of wide-ranging contemporary art sampler in a long time. Not all good but definitely more hits than misses.**

*Final conclusion. I really really like the History Portraits.

**With an exhibition like this where Sturgeon’s Law is in play, even a 50/50 quality split is a success.

Postcards of War by Lebanese artists Joana Hadjithomas and Khalil Joreige. Both subverting the concept of a postcard and reminding us of Beirut’s history—both good and bad—this work was a great way to start the show. Fun and serious combined meant I had all sides of my brain turned on for the rest of the pieces.

Lamia Joreige’s work continued the history of Beirut. Some myth, some historic, some proud highlights, some tragic events, all presented together in a semi-timeline. At this point I was seeing the event become sort of a country-by-country exhibition but the lines would become blurred soon.

Dinh Q. Lê’s Sound and Fury is one of the rare video installations which has been capable of grabbing me in a museum.* It’s a worth watching and manages to straddle the fine line between being an insider-proud view of Vietnam while maintaining a critical eye. It also comes at a nice halfway-point where you can rest for a bit.

*I tied to revisit Stage Presence and I still wasn’t feeling these. Audiovisual works may just be something I can’t deal with in a museum environment. I’m beginning to think that I’ve become spoiled and expect both good movie quality and good art quality.

Oscar Muñoz’s charcoal prints are very interesting. The water prints in particular are a very neat idea though the end results seem more like an exercise in process. The rest of his work is fascinating and reminds me a bit of Binh Danh’s work in that they take historical images and present them in a way which evokes cultural memory and myth.

Tiffany Chung’s maps are fantastic. They’re missing any sort of key to explain what they’re showing. But such a key may not be necessary. As a map nut, I know it’s not always important to know all the map details in order to be sucked into maps as decorative objects. These provide enough of a sense of place that we know what they’re of. And what they really do is suggest that we can do so much more with our current maps.

Akram Zaatari’s, Twenty-Eight Nights and a Poem appeals to the photographer nerd in me. My Hawai‘i scans project where I’m working through my family’s archive of photos has had me thinking about the implications of what kinds of photos we take and display. Zaatari, by looking at one photostudio’s archive is doing the same thing but cutting perpendicular. We can see the same props, backdrops, and motifs across all kinds of families. So many personal photos yet so many similar elements and recognizable objects.

Wilson Diaz, Yto Barrada, and Ciprian Muresan are also all noteworthy but I don’t have much to say about them. In many ways this is a testament to how clear the work is but it also means that I find myself using other works to write about them. Diaz’s prints are pointedly clever and remind me of the San José’s Mexicanismo show. Barrada’s photos could fit in with a lot of other photos of human migrations and border cities. And Mureson’s comics (for lack of a better term) are critical and funny.

Where in the "art world" is San Francisco? The conversation that never gets old: sfmoma.me/P2sFfK #6LoF

What’s interesting is how, while San Francisco is present, correctly, as both the host and an emerging art center. It doesn’t seem to fully fit with the rest of this show. Where the other cities reference San Francisco, it fits well and comes across well as both hub and context for the exhibition. But the San Francisco contribution to the show I didn’t quite understand why it was there.

The rest of the exhibition has major cultural historical baggage attached to it. This shows in the art from there as it references revolutions, oppression, migrations, and wars. The San Francisco component referencing university scholars and organic-food picnics seems a bit out of touch in comparison. I appreciate the ivory tower but unless the point was to call attention to my privilege and make me think twice about enjoying a treat from Blue Bottle,* I think it may have been a bit of a mis-step in an otherwise fantastic exhibition.

*I’m willing to grant that this component may be deliberately out of touch in order to make people question their purpose in the museum. But that seems awfully subtle.

Which is too bad since the question about where in the art world San Francisco is, or should be, is a good one. Do read the link in that tweet. There is a lot of art history here—enough to suggest that we should’t be an emerging art center—but we also haven’t done a good job about branding it.

SFMoMA though has changed recently and started to do more of this.* Its big expansion should only do more for this point of view. Hopefully next time an exhibition like this is launched, the relevant context will be in the museum itself rather than having to be shoehorned in to the show.

4 thoughts on “Six Lines of Flight”