I was looking forward to SFMoMA’s Garry Winogrand show for a long time. While I’ve been familiar with Winogrand’s more iconic images and the backstory/legend of his shooting and “editing” styles, I hadn’t seen much in-depth work of his nor had I had an opportunity to really examine prints and frames.

I’m quite pleased to report that despite my high expectations, the show doesn’t disappoint. At all. This isn’t a “greatest hits”* or a “collect them all”** type of retrospective. Instead, this is one of the rare gems which ends up being as much about the artist as it is about the art.*** It’s all over the place—in a good way—as it winds its way through decades of work and decades of working through things via art.

*One which only shows the extreme highlights and none of context.

**One which attempts to show everything in a “this is important because someone important made it” kind of way.

***Closest comparison I can come up with is SFMoMA’s Diane Arbus show which did a similar job at presenting both the art and the artist.

Winogrand, in a way which perhaps is more familiar to us now, interacted with the world via his camera. That shooting appears to have been more interesting than editing means there was something important in just seeing the world through his viewfinder. Looking at the photos on display, I get a sense for him working out personal issues (girls, couples, etc.) as well as how his mindset reflected (or bucked) the general national mood.

It’s this second aspect which I found to be especially interesting. There is something about Winogrand’s photos which, while not being overtly political, has its finger on the pulse of things. I can’t help but look at the photos as historical documents which reveal the prevailing mood of the country.

His early work in particular shows an extremely subtle, nuanced look at the pre-civil-rights-movement black and white experience. There is a consistent quiet power* in how he documented the different stations which blacks and whites held in New York. He’s able to intuitively capture how people interacted, or didn’t interact, to the point where I’m not sure if he’s even seeing the race thing and just treating all humans as equals.

*And I thought Goldblatt was quiet and subtle.

So much is there to see and he’s unflinching in capturing it. I love his photo of the black men crossing the street (taken from inside the car) because of the number of layers of observation it shows. He saw a human scene. He also records that he’s in his car when he sees it. And he suggests that this is not a neighborhood he would be comfortable walking in. But he still takes the photo and comes up with something that isn’t just about the people he took the photo of.

His photo of JFK in 1960 requires you to notice that Kennedy is surrounded by blacks. I don’t get the impression that this was a photo-op for JFK yet at the same time, this image says a lot about what JFK meant in 1960 and hints at a lot of what was to come in the next four years.

And it explains why so many people, including Winogrand, became so disenchanted with politics over those four years (and after).

That Winogrand’s “best” work comes from the 1960s and early 1970s is not a surprise either. Those years were interesting times to be on the street.* Especially in the cities. Lots of optimism and activism. Lots of generational changes. But as the boomers aged and big victories in civil rights were won,** America’s priorities changed again and Winogrand’s work reflects that.

*What other year besides 1968 could have a museum exhibition dedicated just to things that happened in that year? And that show even felt a little thin.

**Not claiming that the work is finished, just that the biggest victories were won.

Since he stays in the city (mostly) it’s no surprise that his work gets bleaker and bleaker. The city in the 60s was the center of life and industry. In the late 1970s and early 1980s? Everyone who could have left did so and cities were now bleak, dangerous, distrusting places. Winogrand didn’t “lose his way” here, it’s just that his way went through exceedingly unpleasant territory.

If Winogrand were just interesting from a historical perspective, I would have enjoyed the show.* But there’s much much more to it. As a photography nut, what he does with the camera is also extremely exciting.

*At least half of the people in the gallery around me were pointing out and discussing cars, clothing, history, signs, etc. This show is very interesting from a non-art, non-photography point of view.

The expressions he gets in his subjects are the kind of expressions I try to find when I shoot my family.* I don’t want posed smiles or fake expressions. I want the honest moments which I see all the time in my mind but can rarely capture on film.** I want the expressions and gestures which remind me of how someone lives, not just how they pose for photos.

*Not surprisingly, my wife loves it when I point the camera at her.

Winogrand’s photos for me mark the dividing line between street portraits and street photography.* He’s not creeping on people and hiding the fact that he’s taking photos. But he’s not posing or explicitly working with anyone either. This is an interesting dance which has me wondering whether other people see Winogrand’s images the same way.

*This is Kip Praslowicz’s category 4 of street photography typologies.

I’ve been explicitly wondering for a while about the Women are Beautiful images. I’ve always liked a lot of them. I particularly love the image of the woman in the La Guardia lounge. I also know that, while I like them as art, they also embody the male gaze and I like them for this reason too. I rationalize this by thinking that what makes the women beautiful is that Winogrand’s caught a lot of inner beauty, grace, and power and isn’t just focusing on “pretty.” At the same time, yeah. I know that what I like is probably what caught Winogrand’s eye too.

Which makes me wonder whether women find these images to be creepy. My wife says no. For her, there was something about the shooting distance (not too close to be aggressive and not too far to be stalkery) as well as the fact that, despite capturing “private” moments, the subjects are in control (more mature women rather than teenagers) of how they present themselves publicly. But I’m still curious about other opinions here. 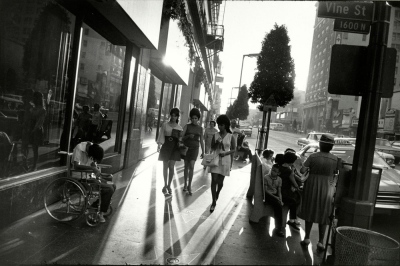 I also love how he situates his work on the streets. Literally. So many of his images include street signs. It’s not enough that he’s capturing all kinds of activity on the streets, he’s also recording where he took them. Yes, he was incredibly poor about cataloging his contact sheets. It seems instead like he’s taking notes on the film itself.

The street signs are especially fantastic when they give iconic locations. Hollywood and Vine.* 42nd Street. Etc. These are places which exist in myth. Yet they’re also real. The images are great. The signs are the icing on the cake.

*I really liked this photo. So many things going on in the frame. Shadows and light. The women. The wheelchair. The full bus bench. The Hollywood Walk of Fame. And then that sign saying Vine St. Perfection. 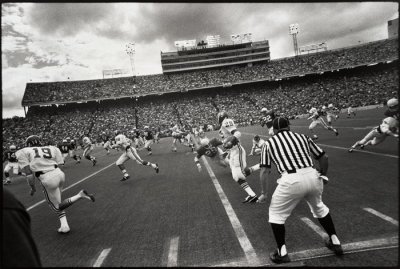 Which brings us to the Winogrand cant. I used to think that it involved using something else as the vertical in the frame. And while there’s some of that, what I saw suggested that he actually used the tilt in a way similar to how I often shoot tilted. It’s not a cheap trick to make things seem more dynamic. Instead, I think that he’s focusing on his subject while rotating his  camera slightly to zoom just enough to place get everything else he wants in the frame.

The last thing he’s paying attention to is the horizon. Instead it’s all about what makes it ins, and what gets cropped out, of his frame.

This is a great reminder to all internet photographers out there. Stop reading internet rules and just shoot shoot shoot, only caring about what’s in the frame.

Beyond the history aspects and photography aspects of this show, I’m also extremely intrigued by the concept of posthumous editing of an artist’s work. But that’s a blogpost for another day. I’m trying to keep this one on topic for what I saw in the exhibition since there’s a lot to see and appreciate.

The show is well worth seeing. And probably worth seeing multiple times. You’re damn right I bought the catalog.