One of the things I like about the San Jose Museum of Art is how it frequently just shows new acquisitions in shows which basically state “we thought this was interesting and think you may too.” I’ve seen some interesting things there over the years—Listening Post being a highlight—and I was interested in their latest installment.

It’s not really an exhibition you can talk about as a whole. These are various works of art—some of which are boring and others of which really grab you—and the only common thread is that they’re new to the museum. But there’s always something which makes the whole visit worthwhile or which I want to remember and talk about.*

*Well, besides David Levinthal which was so good that everything else could have been awful and I’d still have considered my visit a success.

So. Highlights and thoughts that occurred to me while wandering through San José’s Initial Public Offering: 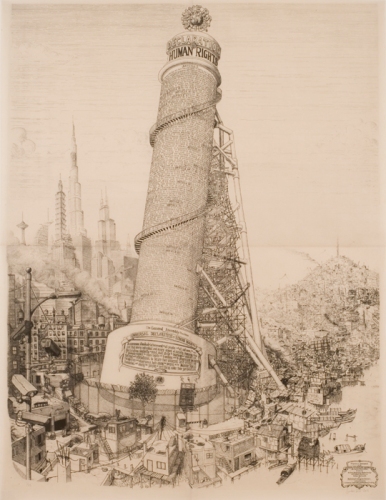 Sandow Birk’s Universal Declaration of Human Rights really stood out. I already like his work after seeing his Dante drawings a few years ago. This is even more amazing. It’s not a piece to read the declaration in,* rather, it’s enough to know that the entire declaration in written there and spend your time scrutinizing the rest of the drawing. There’s a lot to see—much of it directly relevant to the current state of Silicon Valley.

Gleaming glass towers of progress and comfort on one side. Slums and squalor and poverty on the other. Inequality, especially regarding access to basic rights, everywhere. Security cameras and surveillance all over. That the monument is falling over and propped up is just overkill. I stayed in front of this and looked at it for a long time.

From a less serious point of view, I really liked Stephanie Syjuco’s International Orange Commemorative Store. It’s nice to come across art that just makes me laugh. This is one such piece. While it’s relevant to the Golden Gate Bridge and the Bay Area, it’s also just a funny commentary on the way we merchandise everything.

Why not an International Orange store? I found myself kind of wanting a Giants cap with the logo in that color. 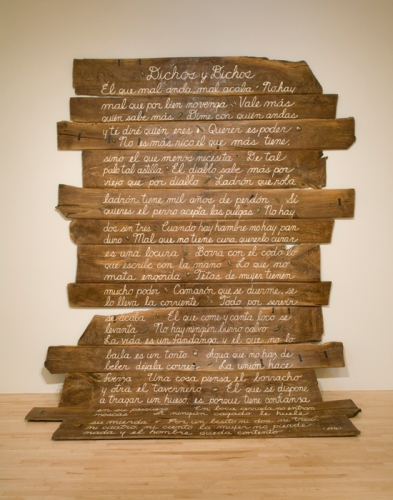 Sam Henandez’s Dichos y Bichos was another piece I looked at for a while. Many of these I recognize. Many I do not. But I’m always struggling to come up with Spanish idioms (especially when trying to explain English idioms to Spanish speakers) so it’s nice to see these. 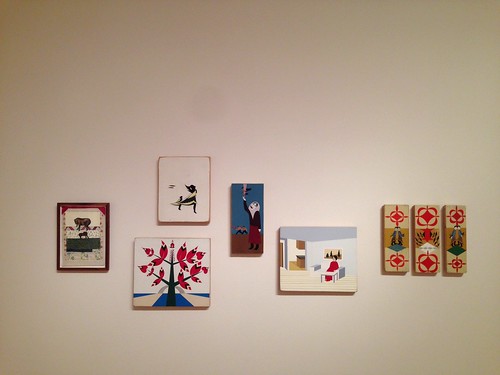 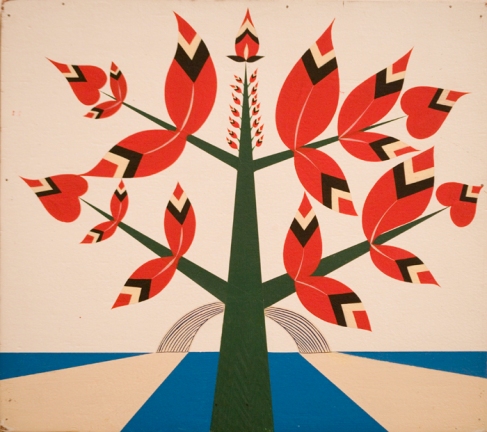 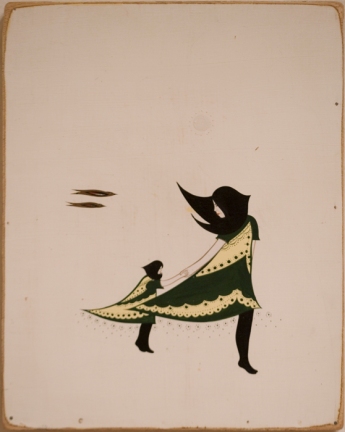 I also really liked Clare Rojas’s paintings. Lots of detail and gesture but also something very controlled from a folk craft point of view about these. I especially liked how they were displayed together in their own cluster.

I’m gradually turning into a Mission School fan and it’s nice to see local museums focus on that movement. 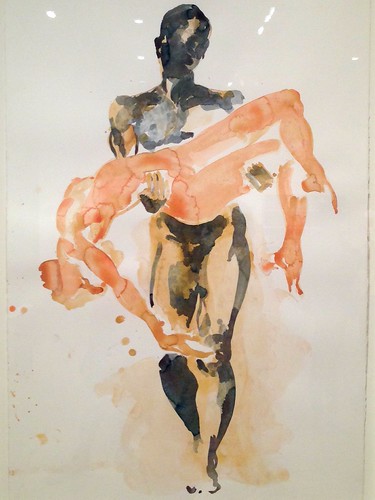 I really liked the new Eric Fischl painting. Not much to say except that I always love these kind of gestural drawings (though this painting is huge) that manage to evoke so much with such ease.

Jay DeFeo is awesome. As usual. She sees things the way I wish I could see things as a photographer. And she paints or draws them in ways that are extremely photographic, but also which are possibly beyond the capability of a photograph. Her objects—in this case a tape dispenser—become renderings that transcend being representations of the product and instead suggest character and soul. I could look at her work all day.

John Chiara is interesting. Especially when displayed with his comment:

I’ve kind of made photography as…labor intensive as it can be.

I’ve gradually been moving away from process fetishism. Especially in photography. Not because I believe that stuff never matters, just that all too often it’s treated as if it’s all that matters. It’s easy to become enamored with the process and forget that the end product also matters. At the same time, of course the process informs the end product.

I’m not too taken with this photo. But I appreciate how the museum tries to strike a balance between focusing on the process and asking viewers to think about how the process influenced the piece by limiting the locations (and environments) in which Chiara could actually take a photo.

It was also nice to note that many, if not most, of the pieces in display are either by local artists or of specific local interest. I’ve always liked how I can get a fix of local art in San José. It pleases me to see that they keep on pushing the collection that way.