My trip to the Oakland Museum also allowed me to check out the new Gallery of Natural Sciences.* Unlike with the California Academy of Sciences, while I visited the Oakland Museum a lot as a kid, I do not really remember the old galleries here. Looking through the new galleries though I can see that there must have been a lot of dioramas and taxidermy animals. The new galleries use and repurpose a lot of the old material into displays that are often nothing like the static dioramas.

*The Oakland Museum has been updating its galleries over the past few years. The other new galleries opened  in late 2010 at which point the Natural Sciences one closed for these renovations. 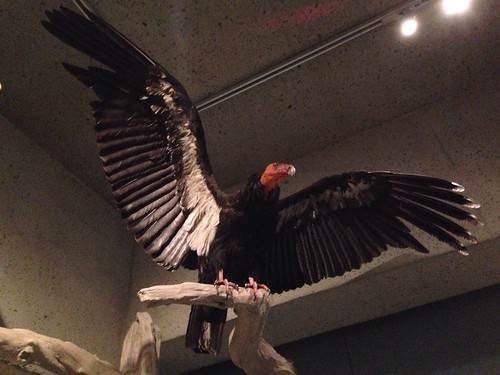 There are birds all over the gallery—both flying overhead and perched on things—in ways that bring museumgoers into the exhibit. There are still some free-standing glassed-off displays but because most of the exhibits are more immersive, those are the exceptions and can highlight specific things now.

The galleries go on a tour of California, visiting 7 key regions,* and highlighting the ecology of each area and why they’re important, distinct, and how we’ve used them. The bird and animal displays are especially notable in how they’re wildlife which is local to those areas yet is completely different than anything I ever see at zoos. I don’t know why the only place I can expect to see local wildlife is in Natural History museums** where the wildlife is dead, stuffed, and posed. Zoos almost never have pens of local animals where you can learn about animals that you might be lucky enough to see in the wild.

*Well, 6 plus Oakland. Which I’m fine with since seeing the natural history of where the museum is—and the home of who’s most likely to visit—is in many ways the most interesting part for me. I loved seeing how many oaks really used to be there and looking at all the ways that waterways have been diverted into underground culverts as the city developed.

I’d love to see zoos take this approach and had a section devoted to the local wildlife and ecosystems. I’d love as a local to be able to bring my kids to the zoo and and really teach them about the animals they might see in the wild. And I’d love as a tourist to be able to actually learn about an area through visiting a zoo. Right now, it’s the science museums and aquariums which do a better job at teaching me about where I am. And that makes me sad.

—My review of Inspiration Points

The land use, land management thread also continues through the whole natural sciences wing. Every display mentions how we’ve used a place, how we rely on it for some resource, and what our impact has been on the plant and animal life there. The displays also get into discussions about what we should do with places in the future as our resource needs change or as the existing resource becomes stressed or as the ownership of the place changes hands. 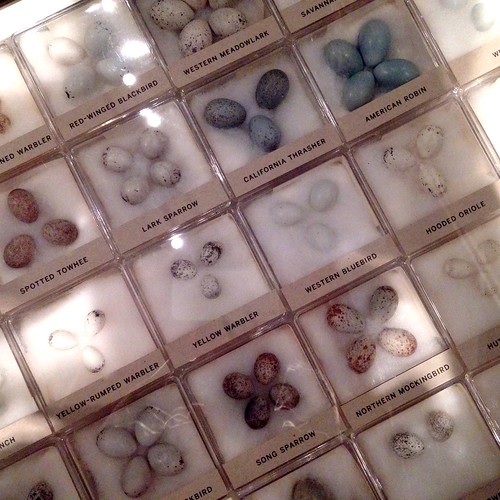 One, more old-style display needs to be mentioned since it was my favorite thing in the whole museum. The egg drawers are awesome. The display is just a file cabinet full of boxes of eggs, each box containing a clutch of eggs from a specific bird. But opening each drawer and comparing everything—sizes, colors, shapes, number—is not only great fun to see all the varieties but is also an exercise in thinking about species vulnerability, location on the food chain, nesting habits, etc.

It’s a shame that this collection hasn’t been digitized since this kind of typology is just fascinating to look through. It’s not just the sheer variety of options, it’s that, while we’re familiar with eggs as a concept, we never actually see them in the wild unless something’s gone horribly wrong. 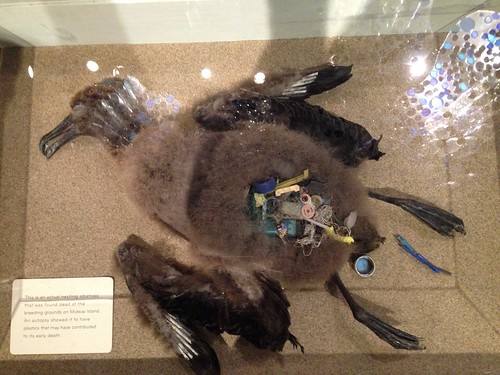 Speaking of horribly wrong. When we get out into the ocean habitat, they have this display of an albatross from Midway island. Which is awful but also looks somewhat staged. I had to pull up Chris Jordan’s work to show that things are actually worse than this looks.

*Well, not this display but the the albatross specimen. 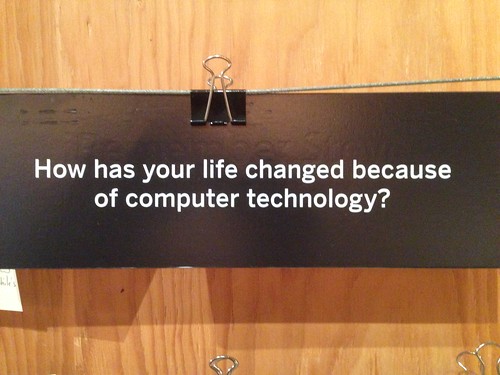 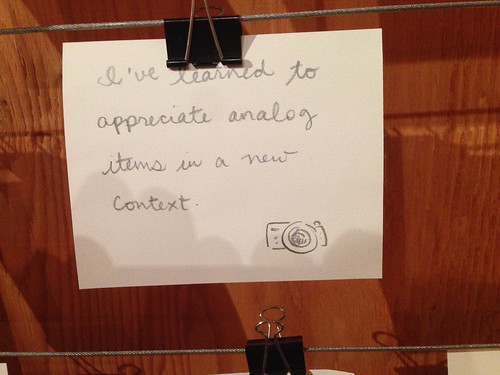 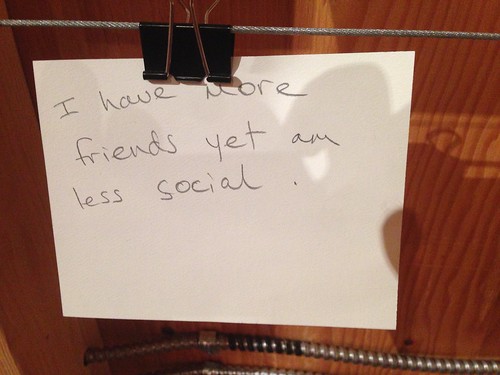 I also took a quick walk through the California History Gallery. Not enough to comment on it in general but just to see it again and check out anything that I didn’t remember seeing before. I like the gallery but have never had the time to really give it a good looking over. In this visit though I did see the technology “garage” for the first time. It’s part of an exhibit on how California has influenced the current world and is more of an exhibit on what is currently trendy* than being actual history.

In the technology garage, while there were lots of computer artifacts* what caught my eye was the interaction board which asked how our lives have changed because of computer technology. As expected, there were a lot of positive comments. I found myself enjoying the negative ones. And the ones which buy into analog fetishism,

*Worth looking at but nothing like visiting the Computer History Museum in Mountain View.

The idea that computer technology is antisocial always amuses me. One of the amazing things I’m seeing with my kids is how they’re able to videoconference with their family members. We live in New Jersey, everyone else is in California, but we can talk and see each other daily, if need be. This is normal to my kids. I think it’s life-changing to my parents who, without the videoconference, wouldn’t be able to see and interact with their grandchildren for months at a time. It’s so much easier to interact and talk to people now that it amazes me how people have become so blasé about it.

Similarly, analog fetishism is one of those things that comes up in photography* all the time. I get it. Old technology** is cool. Mechanical technology which doesn’t succumb to bit rot is especially cool. But we’ve been talking about the digital vs analog thing for decades now and have gotten to the point were old digital technology has become outdated to the point where still using it is a bit of a statement as well.*** This is going to happen more and more. It’s not a magical analog/digital thing as much as a technology evolution thing. After a while, old technology goes from being merely outdated to something that reminds us how the world used to be.****

*And music and movies.

****For example, Jim Golden’s Relics of Technology. It also may be worth reading my thoughts upon viewing Dieter Rams’s 1970s design work.

With specific regard to cameras, I’m curious which digital cameras will become the retro-fetish cameras. We hit the point a year and a half ago where digital cameras were coming out that had been optimized toward specific kinds of shooting. I don’t think people will be nostalgic for VGA images. But for things like the GoPro once other kinds of wearable cameras hit the market? Maybe.