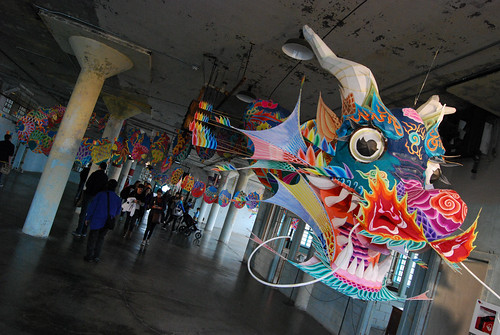 I’ve always been somewhat skeptical about Ai Weiwei. I’m not totally sure why—definitely a reaction to hype but there was more going on too. Anyway, I was in the Bay Area for a week and while there were many other museums I wanted to see, the big Ai Weiwei show on Alcatraz was not on my list. But my family bought tickets and we had a nice outing to Alcatraz to see the show. I’m glad I went and I can report that Ai also completely won me over.

Ai Weiwei’s work presented a very interesting double bill with the Trevor Paglen show I’d seen a few days earlier. There are overlaps—specifically the Edward Snowden area—where the effect of surveillance on free speech and national security and how observation and confinement are often two sides of the same coin. But where Paglen is concerned about surveillance and our lack of awareness of being observed, Ai instead addresses the situation where we know we are being observed and his art concerns the resulting cost to freedom that this entails.

That scary thing about governmental surveillance is that it makes no sense unless there is some consequence for saying the wrong thing. Most of us assume that what we say is if little importance yet at the same time, the observer effect does seem to apply to more than just physics. Being watched does imply a certain amount of being controlled.

Situating the exhibition on Alcatraz is a masterstroke. There are few prisons with an international reputation as a prison space—let alone a maximum security space—that also function as a tourist destination. Repurposing a tourist prison, with its already-existing information about how prisoners are controlled and watched, allows for visitors to physically experience how closely surveillance and incarceration can be related.* Experiencing this exhibition involves walking through both prisoner-exclusive spaces and guard-exclusive spaces and really seeing how they inform each other.

*After all, the panopticon was a prison design.

Ai Weiwei’s point though is that as much as this crackdown on free speech is bad, it’s imperative that we continue to speak—even after you know the state is trying to silence you. And as heavy as this subject is, Ai treats it as something joyful and beautiful. To exercise your freedom of speech is to be free—no matter that the state is doing everything in its power to restrict your freedom.

His kites are a joyous, beautiful way of making this point. The juxtaposition of flight and color with the heavy content and the situation inside prison allows for so many different interpretations. Taking flight from within the walls of a prison. Or being restricted from that freedom. Desiring to fly but being weighed down by all the heavy baggage that comes with that freedom. Or being free and carrying and accepting the inherent risks of that freedom. They call out individual countries for restricting speech while implying that free speech will always be trying to take off and free itself. 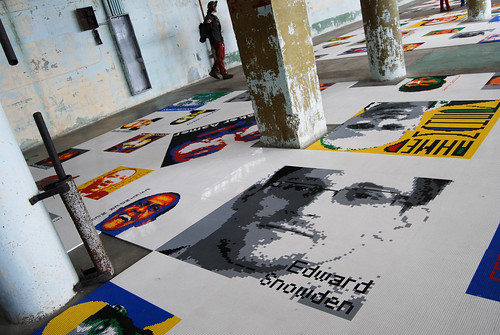 The Lego portraits also touch on this by being creative free-expression* childrens toys used for a serious purpose. They also demonstrate how so many small pieces can work together to deliver a message. I can see what he’s trying to do with these and they do look kind of cool. But even with all that they don’t quite work for me since everything feels a bit forced and the result is less than the sum of its parts. But the parts are still good—especially the list which forces us to think about who’s pictured** and what they are being silenced for saying. The medium in which the portraits are realized doesn’t add much to this. Portraits alone, and the acknowledgment that these people exist and matter, are enough.

*Well, ideally. In practice Legos have become a bit too model-like and instruction-based for my taste.

**And who’s not. For example, doing a gender headcount is recommended here.

I really loved Stay Tuned though. Sitting in a jail cell and listening to the words or music created by people who the state has tried to silence through incarceration? Quite a powerful way to experience their voices. And an even more powerful way to prove how those words have also lived on and not been silenced. While not quite the same experience as being in a prison cell, I highly recommend listening to the the recordings on the @Large website.

The sense of listening to all this is both that free speech cannot be silenced and that governments from all over the world—including the US—have tried, and will continue to try, to silence people anyway. I had a special soft spot for the Víctor Jara room* because I can understand Spanish but hearing languages from all over is a wonderful demonstration at how this is a universal human right.

*I also wondered whether Aloha ʻOe could/should have been included here.

Ai’s global point of view in selecting the detainees in this section is wonderful and deserves special note. I’m not sure a western artist would have been so sensitive about selecting from all over the world. That Ai manages to both show a global awareness while not letting the US off the hook for its own abuses is a perfect balancing act. 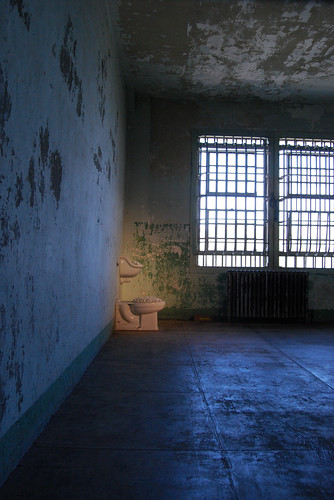 Blossom is also great. Where the other works on display are pretty heady, it’s nice to have something at such a smaller, subtler scale. The porcelain flowers are so delicate and beautiful. It doesn’t matter whether they represent hope or joy or just whatever small amount of fragile humanity you can hold on to while being imprisoned. Where the Legos ended up being less than the sum of their parts, these are more—most dramatically for me in the empty rooms where you can’t get close to the flowers and have to take in the entire, empty space with just a trace element of humanity and freedom present in one far away corner.

It’s Ai’s Illumination piece that sealed the deal for me. So. Smart. Just two rooms with a sound recording to listen to in each one.* But rather than being about individuals, this piece is about cultures—American Indians and Tibetans—that have seen attempts at governmental erasure and silencing. That a Chinese artist making a piece for specific installation in the US is making this comparison between the two countries is smart. Locating this piece in the psychiatric observation rooms as a way of commenting on how this erasure works is brilliant.

*As with Stay Tuned, the recordings are on the @Large website. They’re worth listening to even without the psych ward experience.

And the site-specificity goes beyond brilliance. Ai doesn’t just use a “native” chant, he uses a Hopi one—with the full awareness that Hopis were some of the first governmental prisoners on Alcatraz and that their imprisonment was specifically because of the fight to keep their culture and freedom. That Alcatraz was later occupied by American Indians just emphasizes the importance of this piece in this location. There are deep wounds here and acknowledging and learning about them is something all of us non-natives need to do.

The parallels with Tibet are also interesting. I think they’re completely valid both in a government eradication way but also in a whitey appropriation way.* It’s a good reminder to us that as much as we like to shake our heads at what the Chinese government is doing, we would do well to look at our own government, and its history, as well. As for the appropriation stuff, I can’t help but wonder how much the attempts at erasure have made it easier to do, whether it’s perceived as an orphan culture or as a way of raising “awareness.”

*Similar to what Annu Matthew’s work reminded me of.

Still, despite the attempts at erasure, Tibetans and Native Americans are present and continue fighting for their freedoms. As sobering as it is to see all the oppression in all of the artwork on display, Ai’s point about continuing to speak and be free carries the day. I didn’t come away from this exhibition depressed at the state of things. This is artwork that reminds you, pushes you, to use your freedoms. There’s inherently uplifting about that.