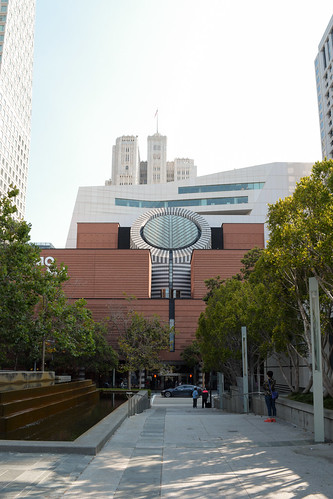 I’ve missed SFMOMA.* I visited it enough to develop a standard beat through the museum each time—visiting my favorite spaces and getting to know the collection as it rotated through. It closed the same time I moved away from the Bay Area and something’s been missing every time I visit. Ever since it reopened last May I’ve been looking forward to summer when I could both get to know the new, expanded space and revisit an old favorite.

*Bumping Tripod Holes 4 since I have another new camera.

As a museum, the expansion is great. It’s full of light. There are plenty of places to sit—benches, window ledges, etc. Every floor but one has access to an outside gallery or balcony. It’s easy to navigate without getting lost or overwhelmed. For such a large space it flows well without forcing you through a specific path. For a museum which now requires close to six hours to do all of,* having these breaks is crucial for getting through it all.**

*Compared to the two hours or so that the old museum required.

**The only rough part is the bathrooms where every surface is covered in the same super-saturated color (each floor of the museum features bathrooms in a different color). It hurts your eyes as they first think that there’s colored light to adjust to and then realize—much too late—that it was white light all along.

And it serves the Fisher Collection perfectly. The Collection consists of many of the big names people will want to see. Rather than just featuring one or two pieces from each big name, the Fishers’ collection has both depth and quality. The large galleries dedicate entire rooms to specific artists and there’s plenty of space for the art to breathe.

So instead of than having favorite pieces I want to go back and see, I have favorite rooms. I love the small octagonal Agnes Martin room and how it invites quiet contemplation and rewards her subtle paintings. The room of Bechers is wonderful and probably the best display of their work that I’ve seen anywhere. The William Kentridge room is pure joy and I could watch Preparing the Flute repeatedly.

Outside of those, the Anselm Kiefer and Gerhard Richter rooms are great.* As are the Sol Le Witt, Alexander Calder, and Ellsworth Kelly rooms. There’s a lot of good art to see and return to.

*Actually, most of the rooms involved with the German Art After 1960 theme are pretty good.

But it’s funny. I like the new SFMOMA in general but I can’t stop wanting to call it Neue SFMOMA Grotesk. What I used to find interesting about SFMOMA now feels like an afterthought—both architecturally and in terms of the collection. As per SFMOMA’s statement, “Seventy-five percent of the work on view in the expanded galleries will be drawn from the Fisher Collection and the other 25 percent will come from SFMOMA’s collection.” The expansion dwarfs the old museum so it feels more like a Fisher Collection museum than anything else.

I suspect—and hope—that most of this is growing pains and an opening set of shows which feels more like four distinct museums housed in one building.

Right now we’re being introduced to everything again. Hopefully in a year after we’ve gotten used to the space, things will mix more and the emphasis on “This is a Fisher Collection Gallery” versus “This is a Campaign for Art Gallery” will be toned down and it will feel more like one cohesive museum.

I am concerned though at how the original collection is now almost completely detached from everything else. There’s a massive ticketing and membership lobby with “entrance this way” signs pointing toward the elevators and staircase up to the galleries. In the exact opposite direction are two doors leading to the original building. It’s basically a distinct museum. 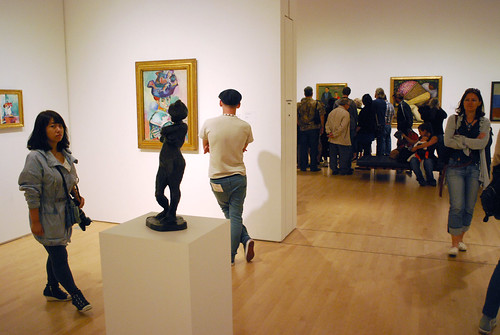 As things are currently displayed, new visitors to SFMoMA will come up the stairs, turn left toward the permanent collection, and find Femme au chapeau, Frieda and Diego, and The Flower Carrier right there welcoming them. This is exactly how it should be. All three of those pieces are the kind which the museum could market as things to see in San Francisco.

The art is still in the exact same place only now it’s no longer welcoming anyone. They’re like the dioramas at the Academy of Sciences—a vestige of an earlier iteration of the museum—which makes me sad.

I used to feel like SFMOMA had made a major change in direction around the Anniversary Show in making a claim on early, important modern pieces (Femme au chapeau, Frieda and Diego, and The Flower Carrier) being locally-promoted. Same goes with how  many of SFMOMA’s big acquisitions over the past decade (e.g. Robert Arneson and Margaret Kilgallen) were also important local artists. Heck, even their foray into Google Arts and Culture emphasized the local angle. But the Fisher collection now dominates and it feels like SFMOMA has given up on its claim that the Bay Area is important to the modern art discussion.

I do enjoy the larger photography space. The old space always felt like it could handle either a special exhibition or the permanent collection, but not both. The new space has enough room for a good-size exhibition in addition to keeping a significant number of galleries of just the permanent collection on display. Photography also, both because of its relatively-recent emergence into the world of art dealers and collectors and because of its close ties to the Bay Area, counteracts the dominance of the Fisher Collection in being able to tell a different, more local tale of art and its importance to the larger art world.

At the same time, part of the photography galleries also feels like a step backwards. While SFMOMA was closed, they had a few On-The-Go shows which mixed photography with painting and sculpture. Flesh and Metal explored the new textures and surfaces which resulted from the mechanical age. Portraits and Other Likenesses approached as portraiture any artwork which represents a person or people. I was hopeful that the expansion would embrace this level of mixing media. Instead, the photography wings feel even more isolated than they did in the old museum.

That said, the two opening exhibitions, California and the West and About Time are both interesting and warrant their own posts. So those will be coming later.

The Campaign for Art is also in the new building so it benefits from the same large gallery spaces. Unlike the Fisher collection though, the rooms a little more crowded and there are many artists on display in each room. While I was a little too tired by the time I made it to the top floor to fully engage with the contemporary art, I can note that the artists on display are noticeably more diverse than the artists in the floors below—e.g. Glenn Ligon, Ai Wei Wei, and Brad Kahlhamer.

It’s good to see that SFMOMA is collecting in that direction now. There’s obviously nothing calling out how 75% of the museum is supposed to be dedicated to white guys but I’m very interested in the directions the new acquisitions will take.

There are some hints of SFMOMA doing this in the permanent collection downstairs too. There’s a prominent display of Ana Mendieta’s work (balancing a bit of the prominence that Carl Andre has in the Fisher galleries) as well as a room featuring Ruth Asawa and Martin Puryear.

If merging with the old collection is one huge challenge that SFMOMA will have to tackle in the future, taking the modern and contemporary collection into a more diverse direction is another. I’m glad the early signs look good in this department.

I was also pleased to see that SFMOMA has kept a large space for design. This used to be the first place I headed to in the old museum. It’s no longer as easy to get to but I’m already working out what my new standard path through the museum will be. The current design show is Typeface to Interface and covers graphic/information design as it’s evolved from mechanical to digital typesetting.

It’s one of those shows which is good but never really becomes more than the sum of its parts. I totally buy the idea that graphic design is inherently interactive. It’s how I’ve always approached my own work in design and typesetting and an exhibition which took that approach and really addressed how would have been awesome. This one has nice objects and artifacts which all involve text—much of Helvetica—but I have to stretch to make the connections.

Still, it’s always wonderful to see Corita Kent or Susan Kare in a museum. Same goes for the Feltron Annual Reports. I really enjoyed learning about Aaron Marcus. And the video of how the IBM Selectric typewriter works is fantastic.

All in all, the new SFMOMA is both a good museum and one which I look forward to revisiting many times. I can’t help myself from being cynical and thinking that massive wealth and development completely changing the character of a place does capture a certain San Francisco gestalt. But I’m also an optimist who believes that the museum’s trend of acquiring artwork by both local and more-diverse artists will continue. I’m excited to watch the results.