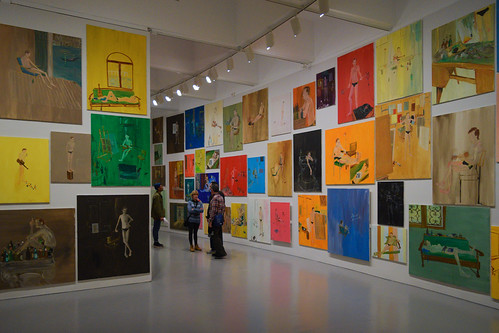 Performance Art is always a weird thing to experience in a museum setting. Most of the time, instead of observing the performance, the museum describes the concept and displays the evidence left behind—leaving it up the the viewer to imagine the experience itself. The Ragnar Kjartansson retrospective at the Hirshhorn is a bit different in this case. While there are still lots of notes and maquettes on display,* many of the pieces on in the exhibition feel like the performances were just part of the process for creating the artwork itself.

*I particularly liked the set models for his opera without any performers.

What I saw when looking at things like The End—Venezia, God, or The Visitors, wasn’t evidence or notes. While it was important to know how the pieces on display were created, they stood on their own as objects in and of themselves.

The End—Venezia is superficially funny but the longer you look at it and walk around all the different paintings, the more it sucks you in and becomes about the paintings rather than the performance as you start treating it as a puzzle to putting everything in order. As you look more and more at how the paintings reference each other you’re also thinking about time and how things change over a summer.

God is very similar in that it’s superficially funny while it draws you into paying attention to something completely different and unexpected. Kjartansson’s singing isn’t the part that you end up paying attention to* as your attention slowly moves to the other musicians in the performance. Whether it’s the small tempo changes from the drummer or waiting until one of the idle musicians finally joins in you’re much more aware of how the entire musical piece is constructed here.

*Though there was something about it which reminded me of Thom Yorke and Radiohead.

The Visitors is a multi-channel installation in which it’s as interesting to watch how other museum goers navigate the space as it is to watch the piece itself. How everyone picks what screen, or screens, to pay attention to as the music shifts. How, as the piece ends, everyone figures out which screens the performers are moving to  and gravitates to those screens. This isn’t evidence which encourages passive viewing, it’s been thought out and the result is a surprisingly-interactive multimedia presentation.

In all these cases, it doesn’t really matter that the original performance was a piece of Performance Art. It’s a nice touch, but for me they could just as well have been created without an audience since that aspect isn’t present in any of the installations. The results are for the museumgoing audience. 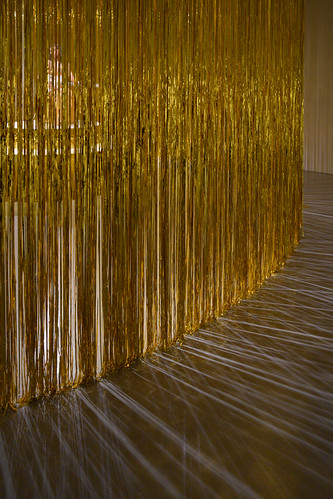 *I can’t help but compare the way everyone is aware of the performer with the way that they ignore the security guards but that’s a completely different blog post.

And while reacting to the piece and the gold and the weirdness of treating a young woman in strapless gown as literally an object on a pedestal is a huge part of the experience. I also wanted to know about how long the performance lasted* and whether the guitar had been modified so that she didn’t have to actually hold the chord for the entire time.

*2 and a half hours per performer, 3 performers a day according to the security guard.