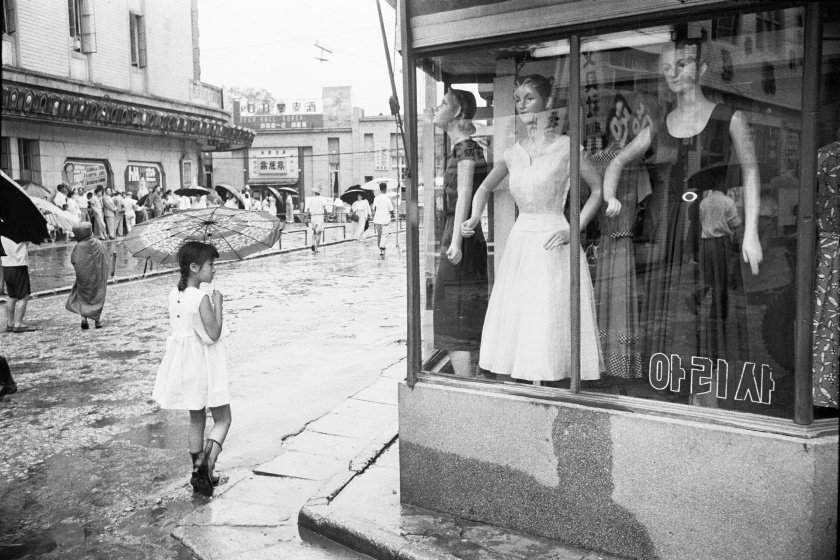 I saw tweets about ICP’s Han Youngsoo show at Mana Contemporary and the photos looked good enough to pique my interest. So I made my way up to Jersey City just to visit ICP and had my fingers crossed that the show would be worth the trip.

It’s not a huge show but what’s on display are examples of how fantastic good street photography can be.* The photos are strongly composed and beautifully seen. The prints blow away all the digital images on the web. Most of the images are strong on their own accord but, when seen as a collective they have a distinct point of view and narrative.

*I have a mixed relationship with street photography. On the web it’s become a bit of a bad brand where—typically—men have chosen to emulate the alpha-male “I have a right to photograph anything in public” mentality and much of what’s presented is a reflection of the photographer’s “daring.” At the same time, street photos are one of the hardest things to do well because of the ever-changing unexpected dynamic on the street and I can’t help but admire people’s ability to get wonderful spontaneous images and capture strangers in what appear to be completely-honest expressive portraits.

They’re beautiful and clever. I love the way that the overhead street car wires end up looking like birds. I love the way the men in the shadows inside the butcher shop mirror the expressions on the pig heads outside. I love the perfect timing in capturing gestures and posture as people walk down the street or gaze at shop windows. I love the textures in the snow that the footprints on the frozen river leave.*

*I couldn’t help but think of Max Desfor’s Pulitzer-winning photo here though.

I love how beautiful Seoul ends up looking despite the ruins and overcrowdedness. At their most-basic level these photos are about a place rather than the people in it. It’s clear that, rather than being photos of people, the actual subject in each photo is Seoul. There’s a palpable sense of love and romance. Seoul is home and Han Youngsoo is sharing how he sees it—what he feels about it—with us.

And it’s a Seoul in transition. The Korean War ended in 1953. These photos cover the period between 1956 and 1963. The city is in the midst of rebuilding as well as westernizing and modernizing. There are still some ruins visible—a shattered roofline here or there but never as the focus of the image. There are english-language signs all over the place. Infrastructure is in a state of flux where streets—when they’re paved—are shared between handcarts and electric trollies. The trajectory is clear.

It’s with the women though—especially their clothing—where the photos tell their most interesting history. These aren’t Winogrand-like photos of women, they’re just conscious of how the changing nature of the city is impacting women in particular. They wear clothing which ranges from hanbok to cutting-edge 1960s fashion. The advertisements and street displays and magazines are all peddling western fashions. Only in one crowded street market is traditional clothing still available.

It’s clear that with the changing fashions that the women’s roles are also changing toward a more middle class direction. And that the city itself is becoming a consumer-based city* of shops and merchants.

*The men don’t show this narrative at all. They all wear western clothing and none of the shops or new consumer goods are marketed for men’s consumption.

I love a great photo as much as anyone but with street photography much of the appeal is how it can document a specific time and place—whether it captures a city and its population in a specific window of time or manages to document how they change. Han Youngsoo’s photos are beautiful but the history and changes he documents is even better