The main reason I went to The Met was to see Irving Penn. But once I was inside and after I finished with the Penn show I wandered around and checked out a few other exhibitions before I got too tired. This isn’t a comprehensive round-up but rather listing a few of the other highlights of my trip 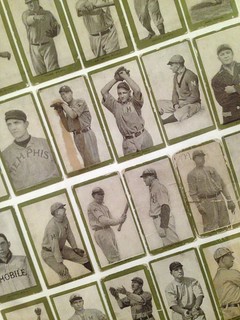 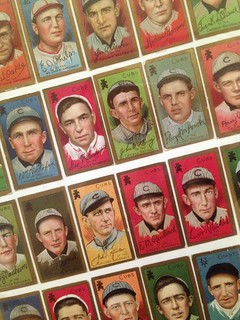 The Burdick Collection—specifically the baseball cards—is the first place I head in the museum. It’s still off in a remote corner of the American Wing where it gets very little traffic. This is both disappointing and wonderful. I want more people to see these but I also enjoy having the whole gallery to myself.

I stand by my comments in last year’s Met post in that it’s especially interesting to look at print ephemera as art. While many of the baseball cards on display didn’t fit into last month’s photography history through being more paintings than photographs, they’re still part of our visual culture and language.

Baseball cards in particular are fascinating in how they represent a direct connection from the early days of cardomania to the modern trading card. The cards in the current hang cover the first half of the 20th century—from ~1910 lithographed tobacco cards to offset-printed Topps cards from 1959—which represents a period where many of the other subjects of cardomania disappeared* and the modern standard trading card format developed.

*Yes there are obviously non-sports trading cards for this entire time period, but the rise of movie and movie-star memorabilia resulted in a very different kind of mass-culture ephemera collecting. Instead of trading cards we had posters and lobby cards and promotional stills related to specific films and releases. Also, while I get hives from the current Allen & Ginter retro-revival brand, I have been finding myself intrigued by its non-sport choices and what those say about our national myths and nostalgia for other kinds of collecting.

As fun as it is to see cards from Topps series which I own, it’s the weirdness between the World Wars where cards became more and more kid-focused and tied in with gum and candy instead of tobacco which fascinates me. No standards—the sizes and artwork are wildly variable—yet there’s a certain “baseball cardness” to all of them. Only the rise of good color photography really puts and end to all of this and, while I enjoy the photography, I do kind of miss the wild-west nature of things which came before. 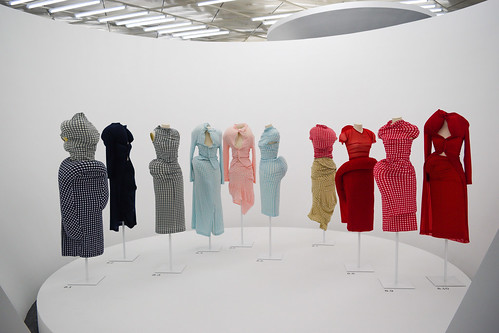 The big fashion show this year was Rei Kawakubo. I liked it, but for all of its cleverness in blurring categories and dualities in fashion, it all felt a little too similar to me. Still, it’s always good to be reminded at how the entire point of fashion is to mess with the human silhouette. And recognizing the dualities in how we approach any art form is a great exercise in questioning and being aware of what our assumptions are.

The standout items for me were the clothes which were intended to be worn by multiple people at once and her approach to the male/female duality. I don’t have much to say or add to the multiple-person clothing except that I wish there were a video of it on the runway.

The male/female clothes though were very interesting—especially in how they were displayed. Kawakubo’s male clothing for women includes extremely wide-legged trousers. Looking at the catalog it’s apparent that these were intended to be worn as shorts* but in the exhibition, the dress forms suggest that they could also be worn as a miniskirt with the other leg kind of behaving like the front panel of a kilt.

*the last photo on The Met’s image page. 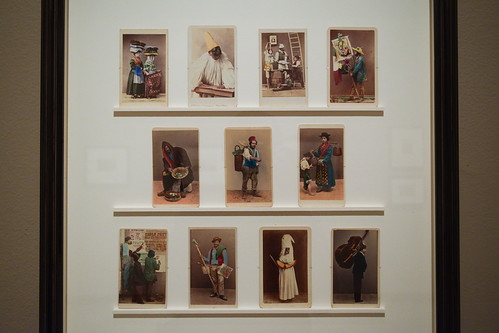 The Early Photography in Italy exhibition, while small, was also a lot of fun. I’ve not see so many salt prints in one place before and this show was fascinating in the mix of different photography techniques. Paper negatives, glass negatives, salt prints, albumen prints in all possible combinations. And that’s not even getting into the daguerrotypes and colorized cartes de visite. I wish there was more about the processes in this show because I really wanted to note and compare the differences.

As much fun as albumen printing is, there’s something even more evocative in salt printing which feels less like a photograph and more like an illustration in terms of how certain details and contrasts get fuzzed out. This also holds with the negatives as the glass collodion negatives hold a lot more sharpness and detail (at the cost of being a lot more work to travel with).

But the photos themselves also represent a very important moment in history. It’s tempting to view these as being tourist prints and imagery from the early days of casual tourism. And they are. But the fact that tourist imagery is inherently tied up with national identity is important to remember. Where tourists travel and how a country markets itself are intimately connected and feed off of each other. That Italy at this point is uniting as a single country means that many of these images—especially the Gustave Le Gray photos of Garibaldi and the “new ruins” resulting from his campaigns—in addition to selling “Italy” to the world are also selling it to Italians themselves.