A large part of my growing up as a Giants fan involved learning about and embracing the Giant’s New York history. The Giants themselves encourage it. It’s not just that players like Willie Mays were stars in both places or that the 1951 Bobby Thomson home run or 1954 World Series win were two of the few high-water marks we had to hold on to during too many seasons of mediocrity. That the Giants had John McGraw, Christie Mathewson, Bill Terry, Mel Ott, and Carl Hubbell’s numbers retired* meant that the franchise claimed its place as one of the first, founding Major League clubs and wrapped its history up with the history of baseball in general.

*Monte Irvin is a relatively recent addition whose absence used to confuse me when I was little.

So I read about baseball history and mentally highlighted every place where the Giants got mentioned. I delighted in highlights like the 1905 World Series or Carl Hubbell’s 1934 All-Star game. And I felt a some of the shame about things like Merkel’s boner.

It wasn’t just the history either. While I’ve yet to visit 16th and Bryant to see the location of Seals Stadium, I did visit Cheney Stadium in Tacoma fully aware that the seats there were the old Seals Stadium seats. Even as an adult, visiting the location of the Polo Grounds has been on my to-do list since I moved to New Jersey.

After four years I finally got my act together and made the trip. I took the subway to 155th and walked up Edgecombe to the top of the John T Brush Stairway. Just passing the Coogan’s Bluff playground sign and seeing those words representing a real place was kind of a thrill, but standing at the top of the stairs was an experience. Even with the apartments it’s wonderful to get a sense of the geography and think about what it meant to look both down into the stadium and out across the Harlem River toward The Bronx. 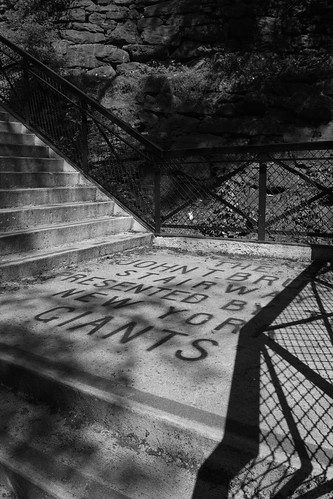 Walking down the stairs isn’t as evocative but it’s fantastic that everything’s restored and looks good. I’m glad it’s not a ruin and is preserved as something that matters. Athletic teams, despite being privately owned, are in many ways part of the public trust and exist as deep-seated tribal identities for their fans. As fans, we get taken advantage of with regard to public stadiums and the fact that our loyalty is a one-way street. And then if/when a team changes stadiums, the old stadium is often destroyed leaving, maybe, a plaque marking the location of home plate.

The stairway does a much better job at anchoring the Polo Grounds in my mind as something that physically existed. I can picture where it was and how it fit in with the land. I don’t have to guess that I’m in the right location nor spend a lot of my visit searching for the plaque. 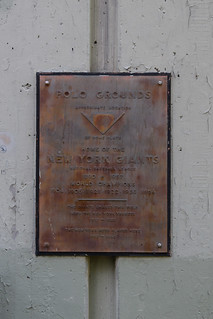 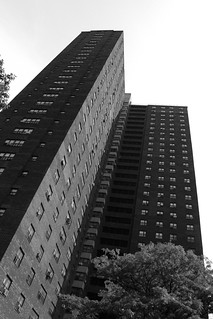 Because of the stairway I had a very good idea where the plaque should be. The hardest thing was finding a way to get to it. You have to cross another road then kind of wind your way downhill into the housing projects while keeping in mind which building, and what side, looked like the proper location of home plate. I had the location about right but the most-direct path was fenced off.

As with walking down the stairway the plaque didn’t move me too much. It’s on the side of a massive tower of apartments and is fenced off so you have to learn to get a proper view. I found it amusing that it claimed the 1904 World Championship given how the Giants snubbed the American League that year. I also like how the Yankees and the Mets are kind of an afterthought.

The plaque, more than anything else, gives the impression that the Giants are no more—something which feels much more in-line with the way that franchise moves exist today. It’s weird, most franchise moves now involve making a break with the past—whether it’s the new location starting history anew or the old location being unable to forgive the pain of losing their team. But it doesn’t feel like this happened with the Giants. Reading about their last game in New York makes it clear that emotions were high—I remember growing up with stories of everything being ripped up and taken home—but many New Yorkers accepted the move and kept rooting for their team. 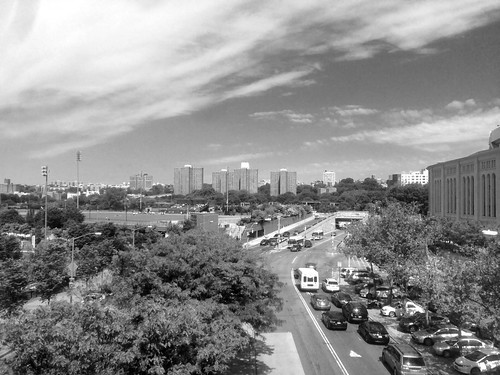 Because I planned to visit The Met later in the day, I wandered back to the subway and transferred to a Manhattan-bound train at the 161st-Yankee Stadium stop. I didn’t know what to expect at this station but I was pleased to find that it was an elevated platform which gave me a view back across the river showing me both the original Yankee Stadium location and the Polo Grounds towers.

I’m familiar with the photos showing how close the stadiums were but seeing the locations from the platform was both a nice reminder and good way to take my leave of the location.