Trading over the internet has been a ton of fun so far. Instead of being concerned about “value” or card-for-card sort of trades, we’ve all been able to fill holes in each other’s collections and be surprised by what we receive in return. Still, the exchanges have so far been limited to bubble mailers and exchanges of maybe a dozen cards or so. Which means that when I received Shane Katz’s package I was a bit blown away.

A surprise bubble mailer is fun. A surprise box? Above and beyond any of my expectations especially as an exchange for a bunch of regional food issued cards. 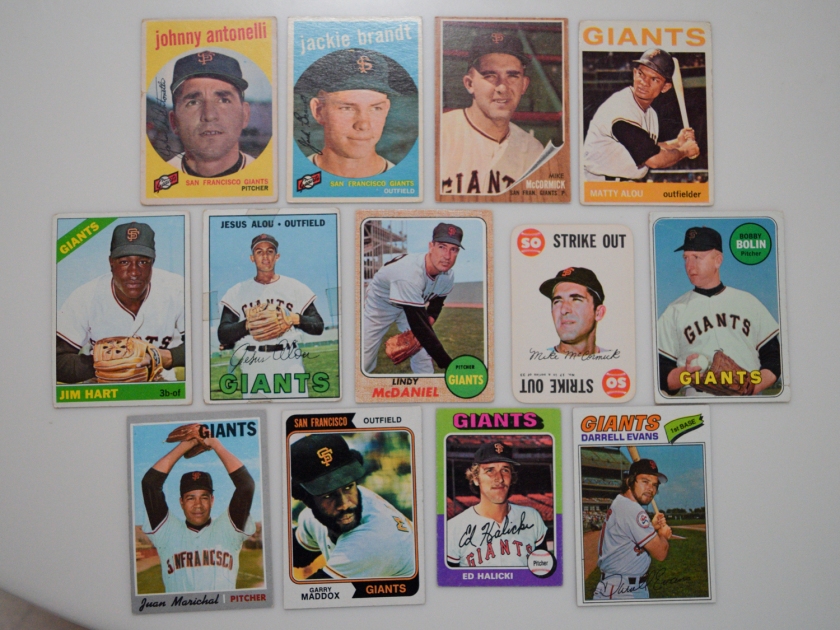 Anyway, digging in. The coolest part was knocking off ten spots on my Giants wantlist. This would have been plenty generous an exchange as it is. Getting a few additional items—specifically the McCormick Game card and the Halicki mini—which I wasn’t actively seeking is a cool bonus.

That the 1968 Lindy McDaniel is a high number and the 1969 Bobby Bolin is a white name variant deserves special mention here. 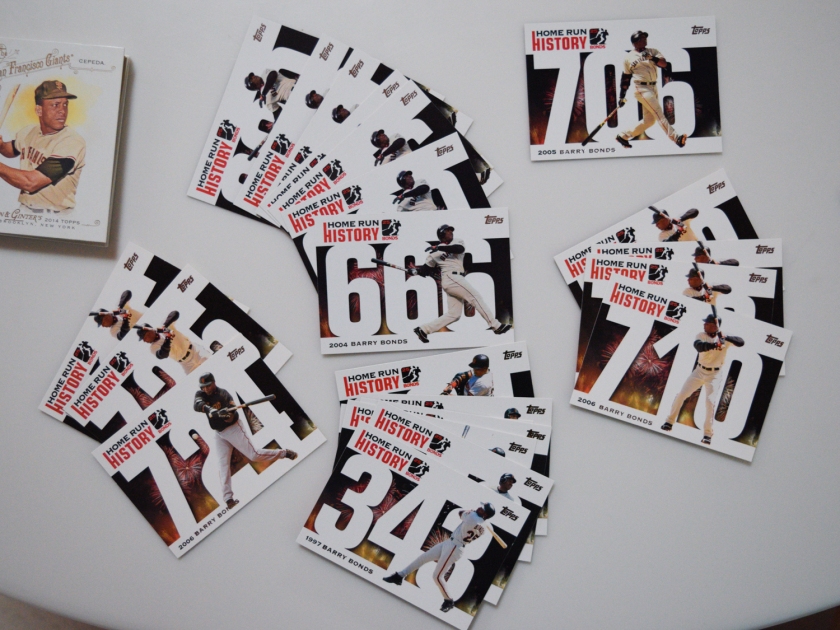 The rest of the box is all Giants cards. At first glance I thought these were all dupes. Turns out it’s a set where there’s one card for each home run Barry hit. I can’t imagine how insufferable this must’ve been to non-Giants fans. Bondsmania was annoying enough in the Bay Area as it was and we actually liked him. When I see things like this I’m reminded of the way Topps has been behaving about Aaron Judge right now. Very glad we didn’t have Topps Now during the Bonds year.

Also, Shane packaged these with the 666 on top. As well he should’ve. 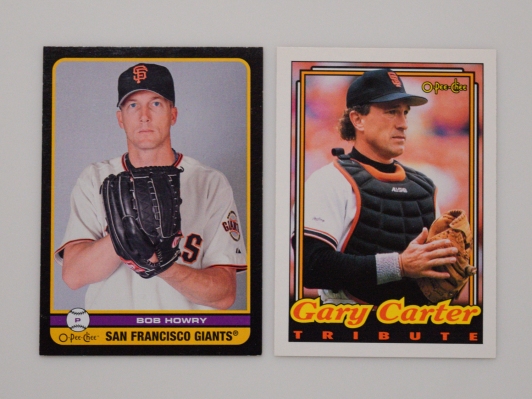 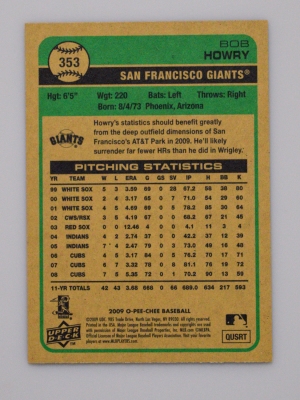 Oh-Pee-Chee! Always fun. I was very surprised to learn that Upper Deck purchased the brand. In some ways this is the most disturbing change to me in the entire hobby. Oh-Pee-Chee has always been Canadian Topps. Not anymore though.

It’s been pointed out on Twitter to me that because Upper Deck purchased Oh Pee Chee, Upper Deck felt like they could print cards using old Topps designs. Topps obviously felt otherwise but this would certainly explain the 1963 Topps designed Upper Deck which I found in a repack.

Topps Magazine and Wacky Packages. not much to say about these except that they’re fun. The Topps Magazine cards in particular presaged a lot of the archives/heritage product in how they use the old designs with current players. Aside from the card stock issues by being magazine inserts, I found their interpretations of the old designs to be better homages than the current product in stores.

First true WTF is this moment of the box goes to Toppstown. I gather that these are redemptions for digital cards—a product which is now covered by Topps Bunt. I’m just going to show my age and admit that I still don’t understand digital cards. 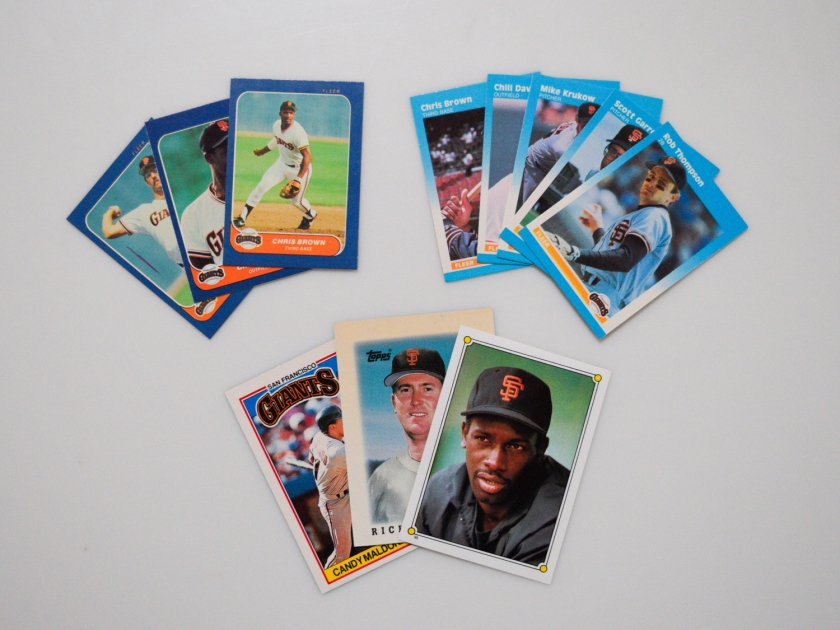 Minis! Specificaly, Fleer minis. The Topps minis I have. Not these ones but I have some of the set. Fleer? I’d not even heard of. I even had some 1975 minis when I was a kid—no idea where I got them—but I never saw the Fleer. So that’s a fun discovery.

1985 Fleer is a set which I have a pack of plus some random commons. So I don’t have many, if any, Giants. I do now. This is cool.

The other oddballs are a lot of fun too. I’ve started collecting these—especially Giants samples— and they’re a wonderful combination of regional issues and samples of what players and highlights from the year are considered nationally noteworthy. The regional stuff is always fun to discover. The national stuff meanwhile is fun for a team collector because it signifies that someone on your team did something noteworthy.

Woolworths meanwhile, while it existed on the West Coast, seems to have disappeared by the time I was collecting cards. Not a store I was ever familiar with. And these cards are not something I ever saw until I started collecting again this year. 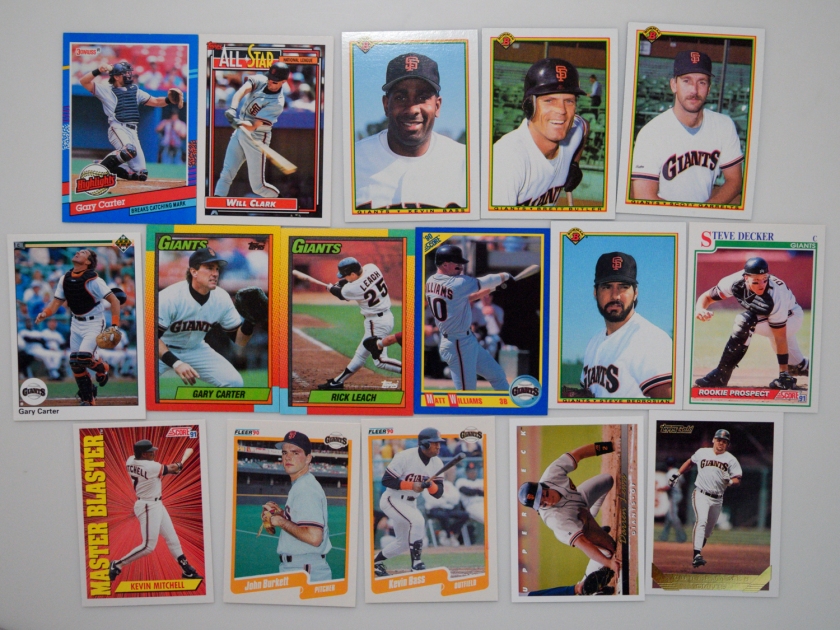 And there was a decent amount of junk wax which I know I collected. I suspect that I have half of these. But I’m not sure which half and the ones which I “need” are especially welcome since they fill in holes in the Giants teams I cared about the most. 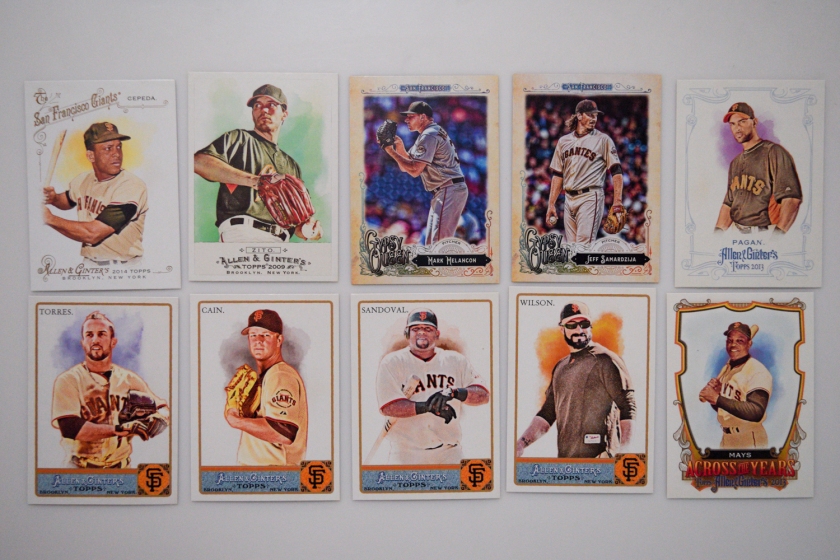 Allen&Ginter, Gypsy Queen, and more Minis. I’m glad to have some representative samples of these sets since none of them interest me. Gypsy Queen’s managed to find a way to make HDR look even worse and the faux-retro plus over-processed digital photograph combination gives me hives.

Ginter on the other hand is much more interesting. I still don’t know quite know what I think about it. I know I don’t like it as a baseball card set. It’s also super expensive for what’s basically a gimmick. But I do like the tobacco card size and I’ve found myself enjoying the non-sports cards on the checklist.

Actually looking closely at them though is disappointing. The printing is screened process inks rather than a solid spot color and as a result looks like someone’s tried to counterfeit a vintage card.

Cards from that time period were printed as multiple-color lithographs. So not halftones or screens—especially on the text. For the price that the Ginter brand costs cost I’m disappointed to see that, not only weren’t they printed with solid inks, that no one bothered to confirm that the tiny type wouldn’t be destroyed by the halftone screen. 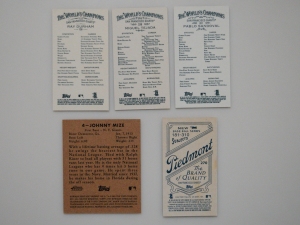 I was also amused by the all-text stats on Ginter’s backs. I know this is a vintage touch but it also feels a bit twee. That the T-206 style card includes a real cigarette ad on the back also surprised me. I didn’t expect this even though both Allen&Ginter and Gypsy Queen are also tobacco/cigarette brands. That none of those brands are in production and are instead associated with baseball cards is presumably why Topps can use the names.

Still, I learned that Topps changed the advertisement from “The Cigarette of Quality” to “The Brand of Quality” so it appears that you can’t actually say cigarette still on what’s ostensibly a kid’s product.

Lots of Topps Fan Favorites. This is indeed a fun set. As a Giants fan all of these strike me in the exact right way. Yes it’s weird to see these glossy but the better quality printing and trimming is very nice. It’s especially nice to see them using the correct vintage Giants logo.

I am curious why Monte Irvin’s signature is missing—it’s there on his actual 1953 Topps card. And with Bobby Thomson being in the 1952 high numbers this is likely to be as close as I’ll ever come to that card. Ditto with the Willie Mays cards too but that’s a much more obvious situation. 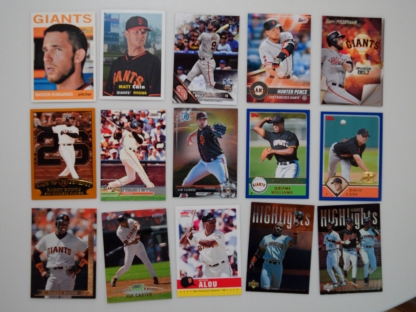 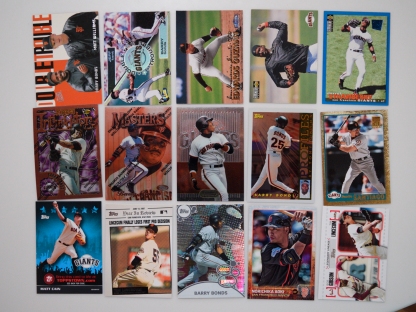 And finally a ton of stuff which is still very new to me. It’s going to take me a while to figure out what these all are. I recognize Topps Heritage and some of the Topps flagship cards. But the rest? Way over my head. I’ve got two decades of card collecting to figure out and sets to investigate. Though I do know that it’s Bowman Chrome which throws my autofocus all out of whack.

So yes. Giant box of cool stuff from Shane. If I ever come into an unexpected cache of 1956 Topps cards I’ll have to return the favor. Until then I’m just overwhelmed and grateful.