One of my twitter contacts, upon seeing that I was collecting baseball cards again, realized that he could send me his childhood collection as it would both get it out of his house and ensure that it would go to a good home. So one evening I found a beat up Priority Mail box filled with sheets of baseball cards and a surprise Everett Aquasox cap.*

*I’ve actually been to a ballgame in Everett game back when the club was the Everett Giants.

It’s a weird thing to be entrusted with someone else’s childhood. In the same way that I feel odd about dismantling and re-sorting and mixing my childhood collection with all my new (to me) cards, I also feel weird about immediately re-sorting these ones. With my cards I had to take a few months to reacquaint myself with both the cards and my memory of them. Only after doing so was I able to consider how I might want to reorganize everything.

With @captnarrr’s? I don’t know. Part of me wants to really look through and get to know his collection. Another part feels like that’s getting too personal (if that makes sense). I don’t know. It’s weird. I know how much my collection meant to me as a kid and I feel like that kid-level anxiety about someone else flipping through your collection is lurking deep down inside all of us.

So I’m going to try and find the happy middle ground of looking through these a few time and getting used to them as a collection while trying not to really examine everything. I’m also not going to photograph or scan anything beyond a few representative pages. 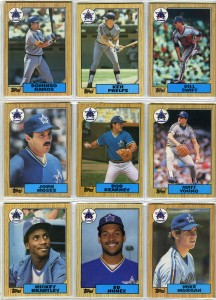 I’ve flipped through a couple times so far and it’s eerily similar to mine in terms of what it covers. Especially in the 1986–1988 coverage. I have ~250 1986 Topps cards. So does he. I’ve been meaning to take a run at that set since it’s the first I bought packs for but hadn’t gotten into the hobby fully yet. Hopefully I won’t have too many duplicates between his stack and mine.

The 1987–1988 cards though will become a starter set for my kids (between these and the massive amount of 1987 and 1988 Topps duplicates I have as well I would be shocked if there wasn’t another complete set in here). I have complete sets for both years—1987 was my first serious year collecting—but revisiting all these cards just takes me back. Even with Topps beating the 1987 design into the ground this year.

The big difference is in how he organized things. I was a by-the-numbers kid. Card backs had card numbers and you were obviously supposed to page them in numerical order. Flipping through pages organized by player or team, while it makes sense to me, also feels oddly wrong since it’s not how I’m used to looking at these sets.

This is funny since my current project is focusing just on one team and I’m organizing each year’s team set in my binder alphabetically rather than numerically. 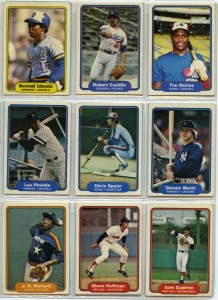 There’s also a decent amount of 1981 and 1982 cards in here. I have maybe a pack’s worth for each of these sets. Sot it’s fun to have more of them. Admittedly, 1981 and 1982 Fleer are both pretty lousy sets but there’s something kind of charmingly unprofessional about them which appeals to me in today’s crisp over-produced world.

The most interesting stuff in the box though are the oddballs and regional issues. These weren’t in pages so they’re easier to scan. The standouts are the Ken Griffey Jr bar cards. I’ve never seen these in the wild although I remember them existing in all that Juniormania in 1989. Seeing a couple different versions is very cool. Then seeing how the backs state that they’re available “Throughout the Northwest” is wonderful since it takes these back to being a purely regional thing even though I know the bars went around the country. 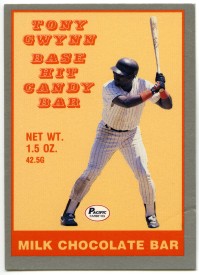 Unlike the Griffey bars I had never heard of the Gwynn and Boggs bars. These look to be the same product but released in 1990. Kind of a shame they’re all just plain milk chocolate but I do like how the font changes for each one. Also it’s nice that the Boggs photo is a more interesting action than just a batting stance. 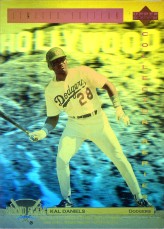 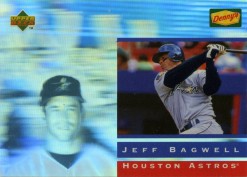 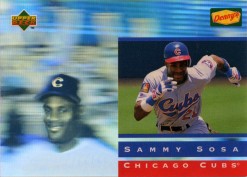 Denny’s holograms are always cool. I was out of the hobby by 1995 so I never saw the 1995 versions in the flesh. While I enjoy the full-hologram versions more the scans of the 1995 cards don’t do justice to the depth in the hologram. But this  is a series of sets which I’m very much likely to chase as well so the more of these that I come across the easier that chase will be.

I think this was the only pre-80s card in the collection. It’s a beaut despite the miscut. I found it interesting that this featured three latino players but feels as if Topps was planning something along those lines and then decided to go with something generic. Or maybe they just couldn’t come up with a decent nickname. 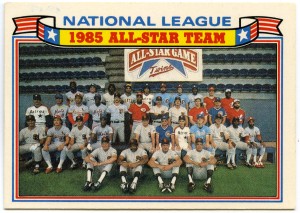 I’ve not seen team photos in the All Star Glossies. I should probably research when that stopped being a thing because these are pretty cool. I always love looking at the All Star team photos and seeing all the different uniforms together. 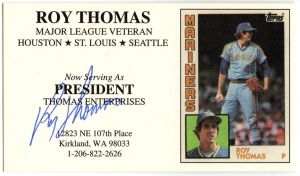 And Roy Thomas is an interesting autograph. Not a player I’m familiar with. I like that it’s a business card with a baseball card printed on it. I’m a bit curious what Thomas Enterprises was since it seems like his main post-career gig was being a middle-school teacher. I’m also a bit curious about about the context in which this autograph was acquired but I don’t really want to get into asking all kinds of questions about this collection.

All in all a very cool mailing which I’ll have fun flipping through and sorting in the future. And in the short term I’ll have to think about how to properly thank @captnarrr for the package.

4 thoughts on “Someone Else’s Childhood”