The Michael Kenna show is actually intended to supplement Princeton’s current big show of Clarence H. White photographs. The hook is pictorialism and its legacy and, as someone who doesn’t really enjoy pictorialism, by including Kenna’s landscapes in the pictorial tradition offers one explanation for why I don’t like them too much.

Pictorialism for me is a period of photography when the medium hadn’t quite figured out what it was best at. Even though people like Watkins and O’Sullivan had created work which still influences landscape photography, a lot of photograph was having problems escaping from the idea that photos should look like paintings. I enjoy seeing exhibitions of pictorial photographs because I can see the evolution of the craft. I just don’t like the photos themselves. 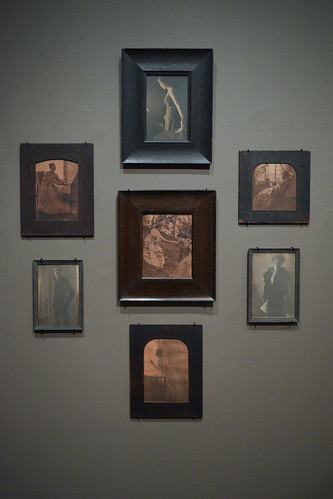 It is fun however to see the photos treated as objects rather than images. The wall of pictorial frames is great as are the examples of prints cut into triptychs. While this sort of feeds into the idea that the photos need to be part of a larger art object, it’s an important reminder how even today we need to think of photographs as things rather than just images.

It’s also really interesting to see how photography interplays with illustration. White has a number of commercial works for books as well as gum bichromate prints* and glycerin development.** Oftentimes the photos are reworked by hand after they’re printed in order to give them a more painterly texture. since many of these images are intended to be printed in books and used as illustrations, the mannered pictorial style feels much more appropriate since it’s working in the service of the text.

*Not inherently pictorial but in this show, often used in ways to block up shadows and enhance the surface texture so the photo actually looks like a painting.

**Effectively a resist technique for platinum printing where parts of the paper don’t get get the developer. White then uses developer to paint new details into the undeveloped sections.

The show though is mainly about White’s evolution as a photographer and, more importantly, his influence as a photography instructor. So we can see his growth as he works toward the medium we recognize today and his early fuzzy posed portraits become more assured in their lighting and compositions. The same goes with his students’ work which often demonstrates the medium’s growth into what we recognize as photography today.

One thought on “Clarence H. White”