Late last months, @LumberjackCards made a New Year’s offer to send a bunch of us a few packs of junk wax* and I happily raised my hand. I didn’t know what to expect but it’s always fun to open packs with my kids. My package arrived on January 2 and I was pleasantly surprised to find that it had a few more goodies hidden between the packs.

*While I’ve posted about going through junk wax in repacks before it’s worth discussing the term and how most of us who grew up in the peak junk wax days of 1987–1993 use it fondly as a way of enjoying nostalgia on the cheap rather than thinking of all our childhood hobbies as being trash.

The main goodie was a Caveman autograph. I got a few cards of his signed in Philadelphia but this 1989 Topps was not one of them. As a Giants fan, 1989 was one of the more exciting baseball years of my youth and this takes me right back.

The rest of the goodies were a handful of Giants cards. I kind of like how the Chrome scans black—especially with the Giants cards. I also understand the brand a little better when it’s applied to cards with borders. On the current full-bleed cards I never understood the point. But then I’m not a sucker for shiny the way I used to be.

I still am not a fan of Ginter but I can admit that the minis do scratch a bit of my oddball itches. On the Venn Diagram of Insert vs Parallel vs Oddball I’d put the minis right in the middle as part of all three sets. And that’s kind of cool.

The Buster Posey Triple Play card made me laugh because @LumberjackCards put it in a penny sleeve. And the Grizzlies contest was not a winner but no surprise there. Yes I know that the Grizzlies are no longer the Giants AAA affiliate but my gut still thinks of them that way. 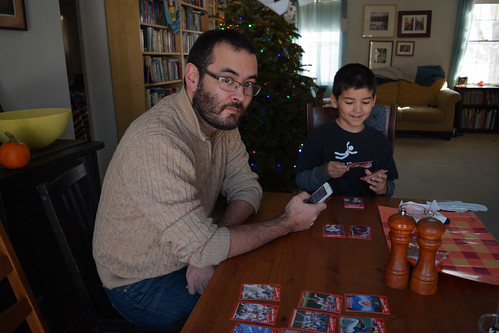 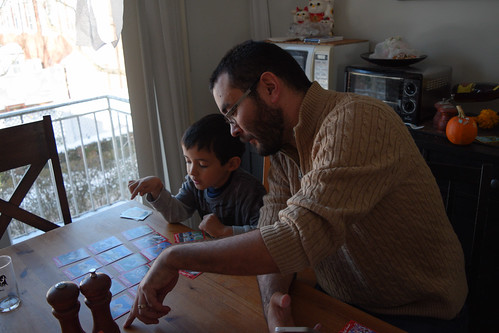 The real fun though was the packs. When I showed them to the boys (after a few days of waiting for them to clean up all their Christmas Legos) they excitedly asked if these had gum in them. I had to explain how only Topps had gum and these had puzzle pieces instead. But they had a lot of fun tearing open their packs and seeing who they got.

My five-year-old had a Kirt Manwaring card right on the top of his stack and got very excited to have found a Giants card. The rest of his pack was not nearly as exciting though he was as intrigued by Oil Can Boyd as I was when I first saw him pitch in the 1986 World Series.

My 8-year-old’s pack was a bit better. No Giants but he got George Brett, John Olerud, and Lou Whitaker. He knows enough now to know what the Hall of Fame is and be happy finding cards of guys who are in it.

My packs meanwhile had a bunch of the MVP inserts, a Robin Ventura Rated Rookie, and an Atlee Hammaker card. 1990 Donruss is another one of those designs which has grown on me. It gets a lot of snark about being the Red Set and it is true that the Green (Rookies) and Cyan (Best of NL/AL) sets are a bit easier on the eyes. But that script font and the color spatter and even the bright color all scream 1990s design to me in a way which I really appreciate now.

I had also forgotten the way wax packs smelled. In a good way. Something about the mix of ink and paper and wax reminds me of being a kid again. A little kid. If the smell of UV coating reminds me of opening cards in the early 90s as an early teenager, the wax pack smell reminds me of being nine years old. Which made this a perfect way to kill an hour of time on a snowy day with my kids.

One thought on “Happy New Year from @LumberjackCards”