This past month Cards From the Attic has been running a bracket on Twitter pitting various baseball card sets against each other. As with many things on the web, it kind of morphed into its own thing and much of my Twitter feed was taken over with #CardboardChaos tweets.

It was interesting to see the tournament progress. Many of us on card twitter have feelings about what sets are better than others—sometimes it’s tied up with nostalgia to what sets we grew up collecting, other times it’s just a strong opinion about what we think a good card should look like. The early rounds in particular were a lot of fun both for voting and seeing everyone’s opinions about each match up.

As the later rounds progressed though things got a little weird. Upper Deck jumped in and started lobbying heavily for its single entry. And it seems like a lot of people’s voting started to be about which brand they liked or disliked rather than the sets at hand. By the time the final matchup between 1989 Upper Deck and 1956 Topps started, it felt more like a Twitter referendum on whether or not you approved of how Topps is managing the hobby.

It’s funny. I both enjoyed the polling more before the brands got involved but I also feel like this was a massive opportunity for the brands to interact with a lot of passionate collectors. I understand why Topps didn’t jump in. I also think that not jumping in demonstrates much of why so many collectors are dissatisfied with the company.

There’s an increasing sense that Topps doesn’t care about the casual collector—let alone the kids. Packs are increasingly hunts for variants or hits or parallels or inserts rather than set building.* If you’re not a fan of a big-market team there are decent odds you’ll have only a couple cards on a checklist. In short, Topps feels out-of-touch from what a lot of collectors seem to want.

*All those special cards ruin the hobby because they both raise prices and encourage pack searching.

So yeah, the final match was often about everything except the cards and there’s been a lot of dissappointing fall out from it as people seem either even more upset at Topps, annoyed at Upper Deck for spoiling things, or upset at @CardsFromAttic for how he ran the whole tournament. @CardsFromAttic hasn’t helped either with an overly-broad, offensively-worded subtweet at many of his critics which read like it was attacking many of the people who initially supported the tournament. This was no longer as much fun.

I wasn’t as upset as many people were. For months now I’ve had @CardsFromAttic over in that provocateur category where I don’t feel the urge to respond to everything he posts. Yes the R-word is no longer acceptable. But I agree with his general point about how people like to complain and complain about what Topps is doing but still spend a ton of money on product. I’m not going to carp on anyone who enjoys ripping new product but if you don’t seem to enjoy it but keep on buying? I question your decision making.

I’ve been less impressed at the discourse in response to @CardsFromAttic’s tweet though—especially in the way he’s been doubling down on driving many of his early supporters away when they call out the offensive language. I know I don’t agree politically with many people on card twitter but it’s especially disappointing to see the hypocritical rhetoric belittling safe spaces which only comes from people who can’t handle criticism.

Still despite the sour ending, for the most part I enjoyed this. Seeing which sets did well gave me a good sense about the sets other collectors have experience with and which sets have a certain aura about them.* And it also served to confirm that I’m not alone in my inexperience with 1950s Bowman cards—an area I intend to learn about and collect more than the handful of cards I currently own.

While the tournament was going on, @CardsFromAttic was running a number of giveaways to both increase participation and reward active participants. These ran the gamut from 1950s cards to brand-new boxes of Topps Heritage. I was lucky enough to win a prize pack of 40 cards from 1965–1978.

The 1960s cards were five each from 1965, 1968, and 1969. 1965 is a beautiful set which, while I’m not chasing or even considering chasing it, is one which I’d love to have a page or two worth of samples to just be able to see all the different colors together. This batch of five is nice in that it includes two cards which are relevant to my moves/expansion project. 1965 is the last year the Braves were in Milwaukee so I appreciate acquiring any samples of 1965 Braves. And it’s nice to pick up random Senators cards as well. That it also includes a White Sox and Cards card makes me think of my first SABR post as well.

1968 is a less-appealing set but it’s nice to have enough samples to have a full binder page now. Thankfully only two of this sample are Topps hatless specials.

The 1969s are a great batch. The Gene Mauch Expos card is another for the moves/expansion collection and the three Astros* cards are encouraging me to look for 1969 and 1970 cards of Ball Four guys.

*That the cards say “Houston” instead of Astros has been a subject of some debate on card twitter as there’s a bit of a legend about Monsanto (who, let’s face it, is always worth blaming for something) threatening to sue anyone who used the name “Astro” due to its association with Astroturf and there’s also some information out there suggesting that Houston itself was trying to charge Topps for the right to use the name—a revenue stream that MLB would only tap much later with it’s licensing.

Don Wilson only shows up in the epilogue of the book as a former teammate who Bouton mentions has died. Hector Torres meanwhile only appears once as a poor bastard who gets hit in the eye with a thrown helmet. Johnny Edwards though is a great card because he’s a featured lyric in Proud to be an Astro.

Now, Edwards is our catcher and he’s really No. 1,
Dave Bristol said he drinks too much and calls some long home runs,
But we think John will be all right,
If we keep him in his room at night,
It makes a fellow proud to be an Astro. 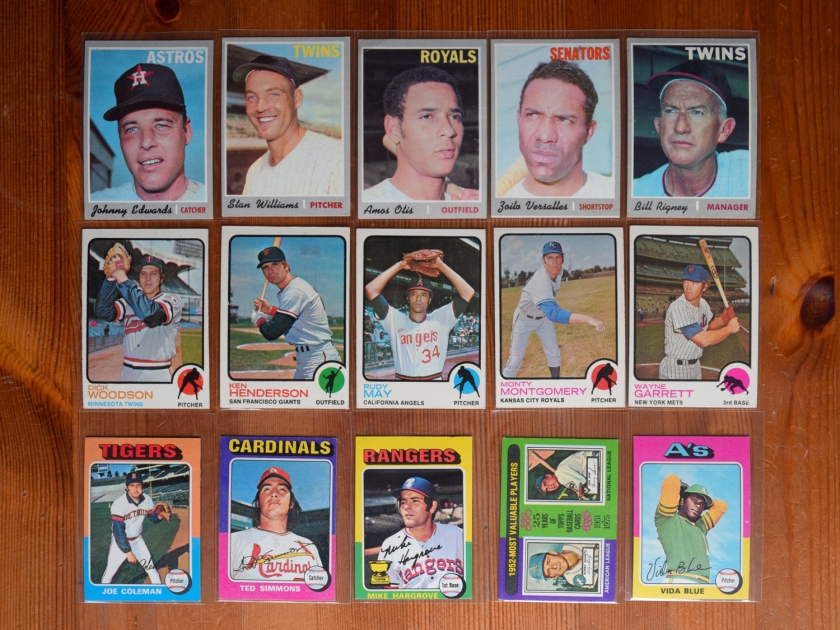 In fact I got TWO Johnny Edwards cards, one 1969 and one 1970. There’s also a 1970 Senators card in here of 1965 MVP Zoilo Versalles to go in the moves/expansion binder as well as a card of former Giants manager Bill Rigney.

The 1973s are a nice batch with no egregious airbrushing or bizarre action shots but the exciting batch is the 1975 minis. These are always welcome and always fun but the Vida Blue is an especially nice card and the Ted Simmons isn’t far behind. These go right into the oddballs binder.

The last batch in this set was ten 1978s. As I’m just over 50% complete with this set I was pleased that this batch included five cards I needed—and three others were upgrades on the cards I had.

So all in all a very fun batch of cards to receive and a big thank you to @CardsFromAttic for spending so much time on this all March. It’s a shame that it all took a turn for the worse in April.