What’s more fun than a random plain white envelope mailday? When you get two plain white envelopes with cards inside. The first envelope is from Colbey (@flywheels) who blogs at Cardboard Collections. Colbey runs a monthly (or so) cheap base-card-centered box break. I’ve joined a few and been pleased by the outcomes. For a couple bucks I can get a Giants team set or two as well as random second team which may or may not hit my project interests.

It’s a fun way to catch up on cards that I either have never heard of or won’t be going out of my way to get. I don’t normally blog about cards I purchase and breaks generally fall into that category. The latest break however didn’t fill completely so Colbey ended up with a bunch of extra teams and was nice enough to send me a handful of cards of Stanford guys from those teams. 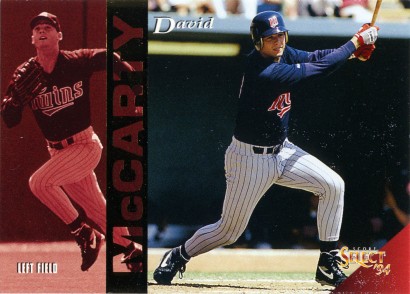 The latest break was 1994 Select and 1995 Score Series 2. I had the Giants and the A’s and in addition to getting a complete set of Giants cards also got a handful of the 1995 Gold Rush cards as well. The A’s sets weren’t complete but had a bunch of guys I remember from my youth as well. I’m very pleased.

Getting the McCarty and Sprague cards are just icing on the cake. I kind of dig the Select design even though there are lots of problems in it. But the photos are interesting and I like the way it uses team colors for the duotone image.*

*No it’s not actually a duotone. That would be awesome. It’s only a 4-color pseudotone. And why yes of course I louped it.

1995 is a set I don’t like much but enjoy having. The gold parallels are surprisingly nice though. I normally don’t like that kind of thing but in this case they’re a huge improvement 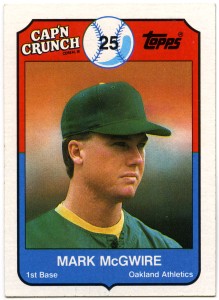 Colbey also included this 1989 Cap’n Crunch card. It’s kind of hideous in a wonderful way. I wish Panini were doing things like this instead of the Diamond Kings since anything logoless makes me get all excited for food issues. It is weird to see a logoless Topps set though.

Thanks Colbey for both running the breaks and being generous with the extras! And if anyone else is interested in cheap base-card-centered breaks give @flywheels a follow or subscribe to his blog.

The other envelope was from Peter. Just a few cards in it but very much appreciated. 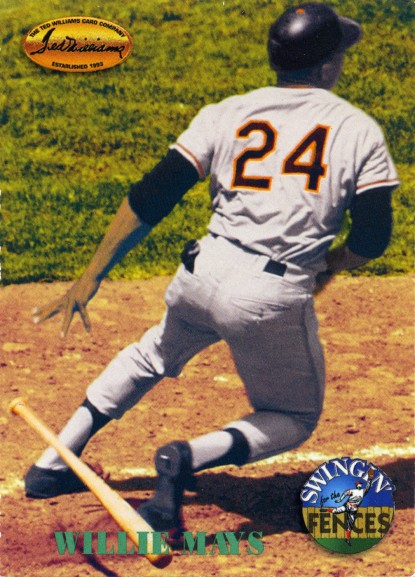 Two Willie Mays cards form the 1990s. One of the weird things for me about the 90s is how retired legends started to show up more and more on checklists. When I started collecting you had to go to TCMA or Pacific to get those cards and they were clearly not Real™ cards. Don’t get me wrong, they were wonderful for me as a kid to get cards of Hall of Famers which I could learn from. But they were kind of afterthoughts to the flagship sets of the time.

All that changed in the 1990s when more and more cards featuring retired players became part of flagship releases. It’s still weird for me to see them show up in sets yet at the same time I still feel that giddy thrill that comes with holding a Willie Mays card. 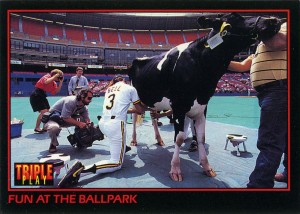 The reason Peter sent me this envelope though was to get me this Jay Bell card. It’s one thing to get a regular junk wax card autographed. It’s quite another to hand a guy a card featuring him milking a cow on artificial turf. He’d just received it in a mailing himself and I had commented that that was exactly the kind of thing I should bring to a Thunder game. One week later it showed up in my mailbox just in time for me to go to a game the following night. Did I get it signed? Tune in to tomorrow’s post.

Thanks Peter! A PWE is always fun to find. But one with a cow card is extra special.

2 thoughts on “A pair of PWEs”