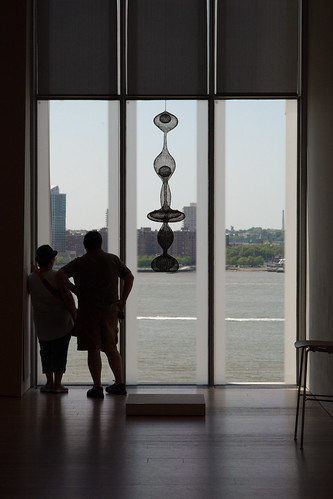 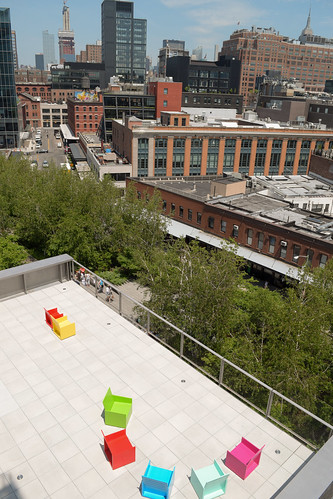 After I visited ICP I took a walk to The Whitney. I’ve only been to it once before—in 2002 when it was in the Marcel Breuer building. I’ve been meaning to check out its new digs for a while and I’m happy I finally got around to doing so.

The new building is nice but also kind of weird. It feels less like a museum and more like an office building with gallery spaces. A lot of this is because there are a lot of offices that you see when you’re navigating the building but there’s also something extremely corporate to exiting an elevator or stairwell and stepping out into a hallway. It’s an odd place to navigate.

It is however located in a nice spot on the river at the end of the High Line with wonderful views from either end of the hallway. The windows overlooking the river can be used to frame artwork in wonderful ways and the open-air patios on the other end give you a nice view of the city.

The Whitney has a lot of exhibitions going on. I’ll cover a few in this post since I don’t have much to say about them and I’ll leave the other for their own posts later this week. And if these short comments seem a bit negative on The Whitney it’s because the stuff I liked deserves its own posts. 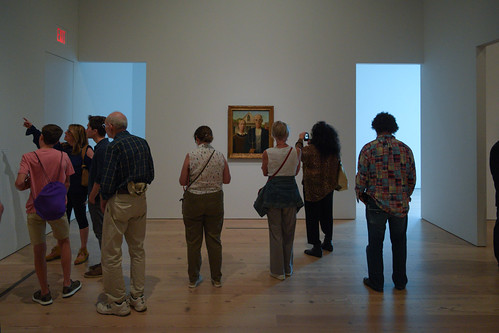 The big exhibition is their Grant Wood show. These are clearly the most-crowded galleries and American Gothic remains incredibly popular.

I… I didn’t like most of what I saw here.

It’s weird. The Whitney presents Wood’s work as not only important but good art. And I really don’t buy it. All this idyllic pre-industrial America stuff feels intentionally out of touch—both for today and for when it was painted. Like I can see the appeal in the 1930s as comforting imagery for when everything was falling apart. But to elevate it as high art? I don’t get it.

There’s so much more interesting art going on in the 1930s. Most of it is even saying something since there is so much to talk about.

Wood though? Empty calories. Plus most of the portraits are grotesque. Most of the murals, boring (though I think they’d work okay on a much smaller scale). The landscapes, bizarrely surreal with the super-crisp lighting. (I enjoy some of the most-surreal ones since they bust through the idyllic thing and become menacing and off-putting.) I kind of grimaced through all the galleries.

What I did like? His Lilies of the Alley sculptures. Those were fun and interesting. Oh, and I liked that the wall text on American Gothic made it very clear that the painting was supposed to be of the house, not the couple.

There was also a small exhibition of Doc Edgerton photos. I’ve written about his work before and don’t have much to add to those thoughts. I’ve never seen so many prints though and having them up in an art museum allows me to see them displayed in an art way rather than the way I grew up seeing them as more science/technical imagery.

I always like it when a photo exhibition makes the point that all photography is basically a lie. There’s a tendency to think of Edgerton’s photos as revealing truths that are too fast for us to see. But the real truth is that while they stop motion, nothing they show actually looks the way it is either.

Walking through that show though gave me some ideas as to why I may not remember the permanent collection. Lots of Hopper and Americana kitsch meant I walked through these galleries pretty fast.

James Castle’s small soot and spit drawings though did catch my eye. I like them for the craft and how roughly they still show Castle’s hand in them as well as the way they work like my favorite photographs by taking something mundane and finding what‘s interesting in it.

4 thoughts on “The Whitney”