The Whitney also had an exhibition featuring protest artworks in its collection. This was much better as it both allowed the museum to address its own role in protests in the past as well as to position itself politically in the current climate.

It’s not a greatest hits exhibition but instead features a number of pieces that, despite all being dated, still hold significant relevance to today’s issues.

That the first room started off with photos by Toyo Miyatake and Gordon Parks immediately put me at ease. Miyatake is frequently overlooked and few of his photos are even online.* With the way the USA is putting Latino migrants in concentration camps and trying to round up Muslims refugees I’ve seen Ansel Adams and Dorothea Lange’s photos of Japanese Internment hit the web every couple of weeks. I’ve only seen one Miyatake and he didn’t even get a photocredit.

*It’s great that the Whitney has seven of them on their website.

So it’s fantastic to recognize his photography as protest and resistance instead of just documentation. And it’s just as important to do the same with Gordon Parks’s and Louis Draper’s work. These aren’t just photos documenting the community. They’re a statement of resistance and protest and I can’t help but see #BlackLivesMatter as the subtext of Draper’s photo of Fannie Lou Hamer or Colin Kaepernick in the subtext of Parks’s photo of Muhammed Ali.

The photos are 50+ years old. The struggle is even older. Yet the same issues are still going on today.

What I like best about this exhibition though is that Whitney points the lens at itself—both in how it’s curated its exhibitions in the past and its place as a tastemaker in the art world. It’s refreshing to see a museum critique its power and how its used, or abused, that power in terms of which artists it champions and what kind of political statement it’s willing to make with art.

I get the sense that for much of its life, The Whitney, while not representing The Establishment,* was instead like much of academia and the art world and still only accessible to people with connections and as a result, wasn’t as cutting edge as it thought it was. Owning up to that legacy is an important first step in recognizing why many communities and artists don’t trust museum institutions in general and becoming a museum which is accessible to everyone.

*Hence all the complaints about non-representational painting also on display in this section.

I’m also fascinated by all the discussion about art’s role and how it should, or should not, be involved in politics. Much of the protest art on display is heavily anti-War and colonization and while I appreciate the sentiment, I was also reminded of Taryn Simon’s work—specifically her photograph of the CIA’s art gallery and how the US used modern art of the type championed by The Whitney and MoMA as a form of cultural imperialism.

It’s a weird thing to recognize how the complaints to The Whitney about too much Abstract Expressionism and not enough representational paintings result in the same goals as Ad Reinhardt’s No War list. 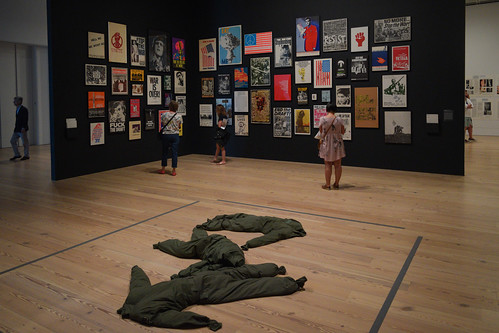 The huge gallery of Vietnam War protest art is very good but also gave me an uneasy feeling. I love seeing all the posters. I also couldn’t help but notice how heavily they emphasize US war casualties as the singular reason to not be involved.*

*Of all the posters on display the ones by Women Strike for Peace are the only ones which consistently mention civilian casualties as being a reason to be against the war.

To be clear, I totally understand why this is the case. It’s the most-immediate and selfishly most-important reason to not wage war. My uneasy feeling comes from the realization that, given the increased use of drone warfare, focusing on US casualties was entirely the wrong reason to be against war. 50 years later and we’re still casually killing civilians in other countries. There’s just not nearly enough outrage or protest about it because the US bodycounts are so low now.

Moving on into the 80s and we get to another round of The Whitney critiquing itself—this time with the Guerrilla Girls.* This wasn’t as pointed as the previous critiques since it involved pretty much every gallery in New York City as well. But as before it’s a welcome thing to see an institution critique itself.

There was also a gallery of AIDS-related artwork. I’m beginning to see the answer to my question from a few years ago when I realized and wondered how museums would deal with the intensity of the AIDS epidemic. This room is especially effective and was a major punch to the gut in its combination of anger and despair. I don’t have an image of AA Bronson’s portrait of Felix Partz up because I can’t bear to look at it again. It’s a brutally effective piece that forces us all to think about whose deaths we’re complicit in.

Speaking of deaths we’re complicit in, the galley about power is also a major punch in the gut that feels distressingly modern. That Carl Pope’s trophy case (one award per incident of police violence) is 24 years old is an absolutely appalling indictment of how fucked up the policing system continues to be.

The other pieces in this room are similarly timely and the only thing which marks them as being dated is the absence of the new horrors that have occurred since the piece was made. Everything else is still relevant.

That so much of this exhibition is still relevant today shows both the importance and impotence of protest art. Did any of these pieces change things for the better? I’m not so sure. But the fact that they exist and show that we have to continue voicing our opposition to things is notable. As is the way they demonstrate how much of a mistake it was for people to sit back and think that things have gotten better since we fought all those battles in the 60s.

One thought on “Incomplete History of Protest”