My favorite thing I saw at The Whitney was Zoe Leonard. By far. It’s rare when I see an artist whose work is this much my kind of thing but in gallery after gallery I found myself just nodding my head and appreciating just how much this was my jam.

I’ve encountered her photography before at SFMOMA where her Analogue portfolio was used in conversation with Janet Delaney and Eugene Atget as a way of documenting the changing city as it develops and redevelops. I liked it then but I like it even better seeing the same portfolio with the rest of her work.

For a medium which is often about a fraction of second* Leonard’s work consistently comes back to issues of slow evolution. Windows in buildings that have been bricked up and painted over. Trees which have grown around man-made infrastructure.** In this context Analogue becomes more about change as a natural evolution in the city instead of reflecting any explicit moment of time and development.

*Garry Winogrand’s quip answer of “around 1/125th of second” in response to being asked “how long did it take you to make that photo?” is the go-to snark here.

**Both of these are subjects I’ve found myself drawn to as well. 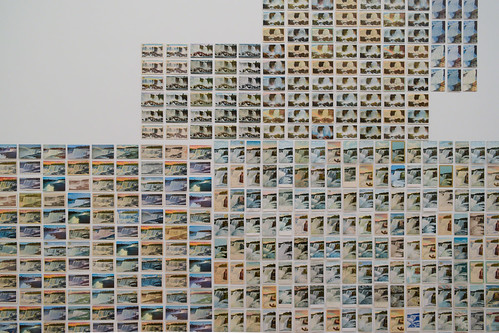 Her photos of Niagara Falls coupled by the two huge installations of postcards extend the slow evolution theme beyond what happens in-camera and adds elements about how humanity has documented the evolution over a century of time. That Niagara Falls is moving upstream by like a foot a year coupled with the sheer number of photos of the falls means that the archive of postcards that Leonard has assembled is working on numerous levels with regard to evolution.

In addition to the basic level of how each photo shows a moment of Niagara Falls’ erosion, they also show both how our views of the falls have changed in popularity and how our printing itself of postcards has changed.

As a print geek I could just look at the evolution of printing technology and stare at this wall for hours. But it’s fascinating to see how certain views are popular and what vintage of postcard they seem to be mostly composed of. It’s also a wonderful demonstration of how even with dozens of different views, each photograph feels like a trope.

This is, again, a piece where I appreciate the craft both because of the craft and the way that craft enables so many things to see and take note of. You can seize on any thread and follow it through. That there are so many threads to follow is just amazing to see and stretch your brain with.

Not everything on display shows evolution. Unfortunately. The most powerful piece in the exhibition for me was I Want a President precisely because it shows how little things have changed in two-dozen years. The entire poem is a punch to the gut.

It hurts to read it. It hurts to recognize how this is how liberals felt after the 1980s yet the supposed left-leaning political party has failed to really address any of this during my entire lifetime of being eligible to vote. It hurts that every single fucking line outlines the things that gave us our current disaster in office. It hurts that every single fucking line describes the people that that current disaster will kill through his policies. 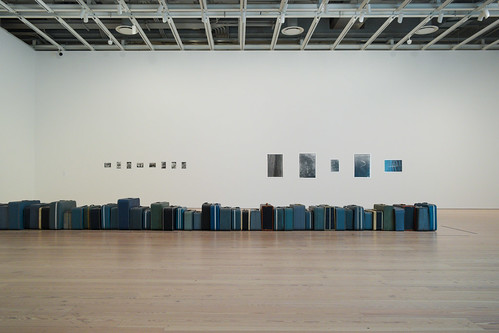 One of Leonard’s pieces is a sculpture of blue suitcases to which she adds another suitcase each year she lives. While I appreciate the concept of a piece where the artist’s mortality is a defined part of the concept, I just wish there was a bit more information about whether the suitcases get reordered each year or each installation. It doesn’t look like a chronological view of suitcase fashion over Leonard’s lifetime (I noted the absence of any roller bags) so I couldn’t help wondering if there was some method to the ordering. 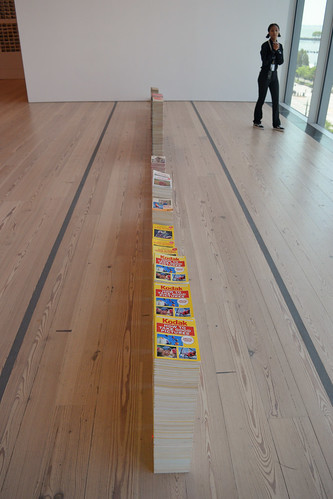 The installation of Kodak books, while an interesting comment on the evolution of mass-market photographic education, was another highlight of my visit because I got to watch another visitor cross the DO NOT CROSS tape, ignore repeated warnings from the security guard to move away from the art, and blithely pick up a book. It was only after she picked it up and the guard’s tone changed from “stay away from the art” to “YOU ARE NOT ALLOWED TO TOUCH THE ART” that she sheepishly put the book “back.”

Actually, that wasn’t the highlight. The highlight was getting to watch the guard call in the art handlers to have them repair the installation. Which meant that I also got to see how the piece is actually assembled.

It turns out that each pile of books has a hole drilled through it and there’s a post keeping everything together. The topmost book has a hole only drilled part-way through and so masks the construction.