The same day I got a plain white envelope from Pre-war Cards, I also received a 300-count box of cards from @robbyt86. Robby is a Tigers collector whose blog has gone fallow. Thankfully his How to Properly Page a Topps Set post is sitting on the top of the pile. On Twitter Robby and I hold down the print geek side of the conversation. He’s worked in printing and prepress for decades and oftentimes we’re the only one notices and appreciating technical details in how cards were actually produced.

I’m not sure I’ve ever received two items that are such polar opposites. Don’t get me wrong, Robby’s box was just as much fun as Anson’s plain white envelope, it’s just that there’s no way to compare the items inside. Where the pre-war cards encourage me to dig into history and connect things to what I know about the sport and industry now, the modern cards end up hitting me in the feelings and encouraging me to remember teams and players I watched myself.

The first dozen or so cards in the box are cards from my youth. I’ve been searching for that 1988 Fleer sticker of Candlestick for a while now. These stadium stickers are my favorite sticker insert from Fleer and that aerial view of The Stick reminds me of all the games I attended when I was a kid.

All those 1994 Donruss Giants cards are also all new to me too. 1994 is the year I bailed from the hobby and seriously detached from baseball so the cards from that year all represent an interesting thing where I sort of recognize them but in that “oh yeah I forgot about those” way. The players though are ones I remember fondly as I had seen many of them in spring training that year.

The next batch of cards is from the late 90s and early 2000s. These are all new to me. These Bowman cards? Never seen them before. Pacific online? Nope. The Pacific Invincible is pretty cool in that the photo of JT Snow is an acetate insert that shows up on both sides of the card. Also Invincible was one of Pacific’s Spanish-language brands and it’s always cool to get more of those cards.

There are also a few gold parallel cards in this batch. I’m not sure when Topps started stamping them with serial numbers but each of these is numbered out of 2001, 2002, or 2003 (depending on what year the card is). I don’t usually like colored parallels but I did like the early-90s Topps Gold and I still like these early 2000s ones too.

The 2002 and 2003 ones in particular are interesting in that rather than using gold foilstamping for the parallel, Topps printed metallic gold ink on top of the existing card borders. This results in some interesting ghosting issues on the 2002 cards in particular since the gold ink covers some white text and you can still make that text out if look at the card just right. The Topps logo is also covered so in many ways these cards are the rare modern cards that Topps has released which don’t have their logo on the fronts.

As someone who doesn’t like the brown and blue borders on the 2002 and 2003 base designs, I much prefer the way the gold borders look too. It’s close enough to the orange in the Giants logo colors that I find myself especially liking how these look on Giants cards.

More of the same but getting to 2011 now. The Topps Shoebox cards are probably the closest I’m ever going to get to those 1952 high numbers and hall of fame rookie cards. For now they‘re in my binder with the 2003 cards but I might move them into the vintage binder as placeholders at some point.

Topps Lineage is one of those sets which looks like it would be fun to roll out every 10 years or so so each generation of kids can have a new base set of all-time greats to collect and learn about. 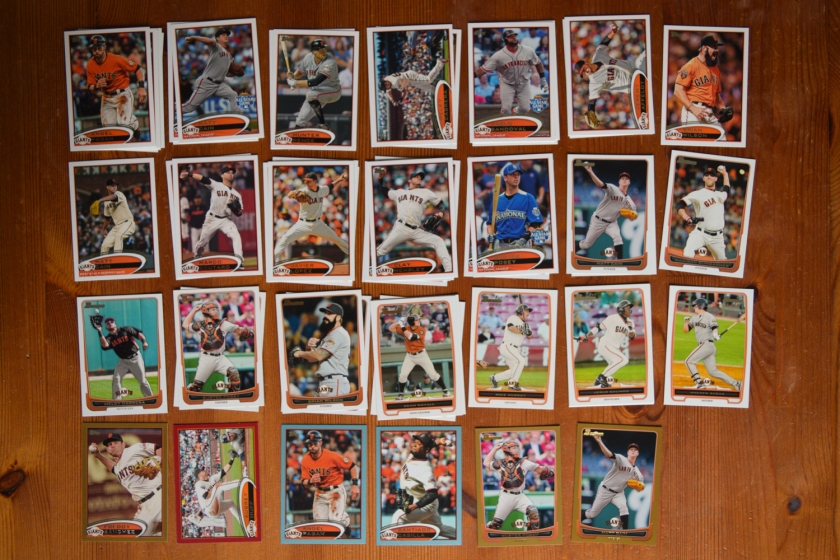 The bulk of Robby’s box though consists of cards from 2012 and newer. In many places there’s close to a team set for each year—or at least a near team set for update or Series 2 or something like that. I don’t have many of these cards and while I haven’t fully decided what to do about those sets yet, this mailing has pushed me into at least getting the team sets.

The 2012 cards are great because they remind me of that second World Series win. (I figure Robby just wanted these out of his house.) The whole 2010–2015 run of Giants cards is one that I’m likely to pursue now since that 6-year run of players and cards will likely represent one of the high points of my Giants fandom for a long long time.

The handful of Bowman cards in here as well represent my first exposure to this set beyond a single exemplar card. I can never tell Bowman cards apart so it’s nice to have enough to really get a sense of the set. And there are a few proper colored parallels. I’m still not sold on these but when I see them in hand I can see how player collectors want to collect a complete rainbow. 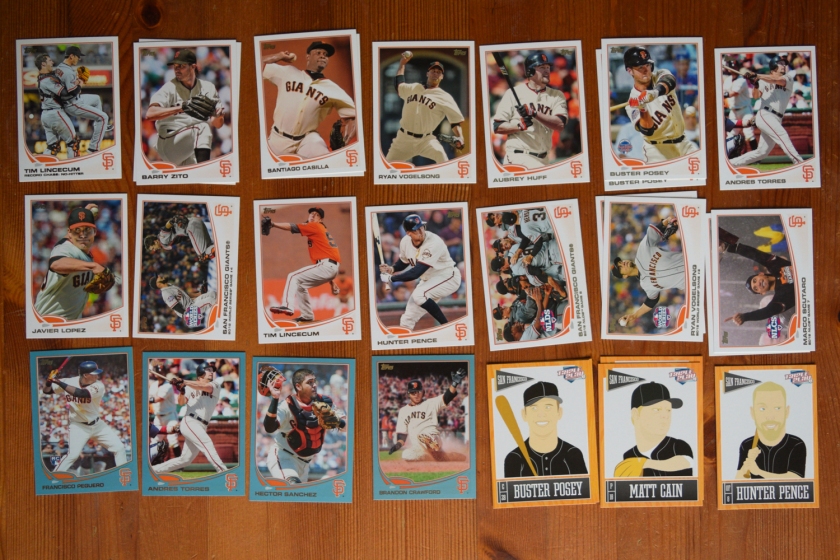 A bunch of 2013 cards including a few which feature 2012 highlights. I knew of some of those cards but others, like the Vogelsong one, somehow slipped through my radar. I’m very happy to have them. I also find myself appreciating this set a lot more each time I see it. 2011–2014’s designs have a tendency to blend together for me but 2013 is starting to stand out in a good way.

A few more colored parallels. I have to say that the blue color in particular makes the Sea Turtle nature of this design even more turtle-like. And a few Triple Play cards that I can’t believe are real cards since they look like something my kids would’ve drawn on their iPad.

Also it’s worth noting that beginning with the 2012 cards, there are a lot of duplicates in this box. Which is great since these World Series-winning teams are teams that my kids also like* so having plenty of cards to spread around the family is very much appreciated.

*They enjoy watching the DVDs of the games.

2014 shows how the colored parallel thing is exploding more and more. I have no idea if the red sparkles are supposed to be extra special or if that’s just a Target exclusive thing. I can say that having all these different colors makes the gold parallels stand out less even though they’re the only ones which are numbered.

This photo also shows that Robby included a bunch of Donruss cards. I have very little experience with the current incarnation of Donruss. I have a few 2018 Diamond Kings, I only just received two 2015 cards from Marc, and there might be a couple others in my Stanford albums. Anyway I definitely had fewer than ten of them before this mailing.

They’re an interesting set. It definitely gives of that 1980s Donruss vibe. The way the photos have removed almost all the orange from the uniforms makes things look almost like they’ve been selectively desaturated. I don’t know if I like them or not but I appreciate that they’re trying to root themselves in a sense of brand identity in a way that Topps appears unwilling or unable to attempt.

A ton of 2015 Topps. Which is great since I love this set and this team is the first that my eldest son kind of remembers outside from watching World Series DVDs. As with the 2013 set, there are a few highlights cards in here that I was not aware of so I’m very happy to add those to my collection as well. 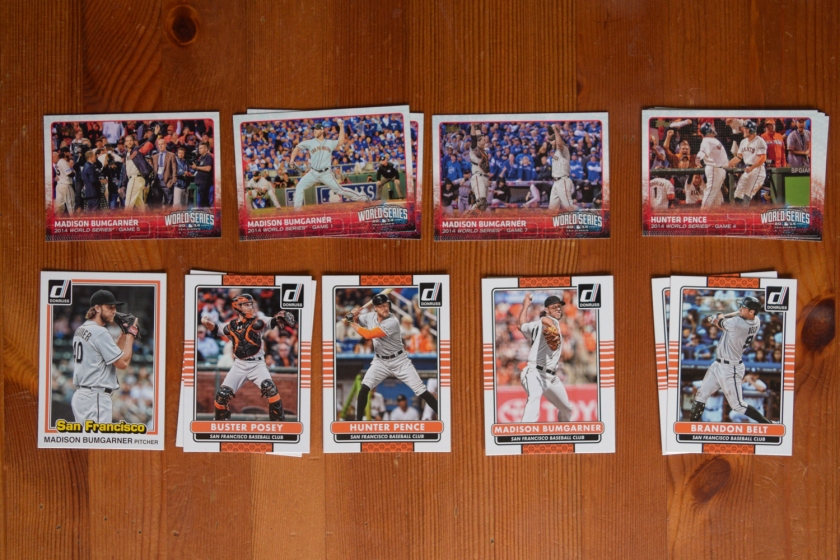 I especially like how the World Series highlights in the 2015 set look distinct from the base Giants cards. Different logo and coloring means they stand out in my album as the highlights they are.

And more Donruss. More orange on the uniforms this time is a better look. That 1981 throwback design is one of the rare cases where the homage feels like an improvement on the original. The base designs meanwhile still show an admirable commitment to Donrussness.

And finally some 2016 Bunt which amazingly meshes with my current Bunt cards to give me a complete team set and a 2018 Heritage card which doubles the number of Giants I have from that set (sadly they’re the two Giants with the worst WAR on the team right now).

Some 2016 and 2017 Donruss which demonstrate the problem of leaning too close to Donruss homage. Yes these two designs are distinct. I also found myself getting them completely confused.

Part of the problem here is that Donruss, more than any other brand in the 1980s, really encapsulated the feel of the time for me where I can point at any Donruss design from 1984–1993 (aside from perhaps 1992) and say that it reflects how part of the world looked at that point.

These new Donruss designs echo that datedness but also whitewash things so they look generically retro. This would work in any given year but the cumulative effect of multiple years of it is that all the distinctiveness is gone.

Anyway this was a great box to go through. I might have to do a second post at some point when I separate everything into piles for my kids to split up and file. But that might be in months since this was too many cards to give them all at once.

5 thoughts on “Mailday from RobbyT”