While Matt has helped me with my Update set before, he recently decided that he was done with the whole Update concept and was going to be shedding the last decade of Update cards. I get it, Update’s one of those sets that needs to be strongly defined in order to make any sense. Is it a set of highlights to summarize the season which just ended? Is it intended to correct players in the flagship set who changed teams or weren’t on the roster at all when Topps locked the checklist the previous January? Is it a celebration of players who made their debuts in the season? Is it a celebration of players who made the All Star team that season?

Currently the answer to all of those is a resounding “kind of.” Are all of those elements in Update. Yes. Does Topps do any of them well? No.

I still enjoy Update though at least from a team collector point of view since the Giants aren’t a team that Topps either short-changes or over-emphasizes on the checklists. And I like the idea of completing the 2017 set because it marks my return to the hobby and represents the first set that I purchased packs of with my son. So when Matt put out a “shoot me your wantlists” call I sent him my set needs and mentioned I’d be interested in any other Giants as well.

So a few weeks ago* a box of cards showed up in my mailbox and inside was a bunch of Update and a bunch of other goodies.

*I received so many mailings at the end of the school year that I’m running weeks behind. 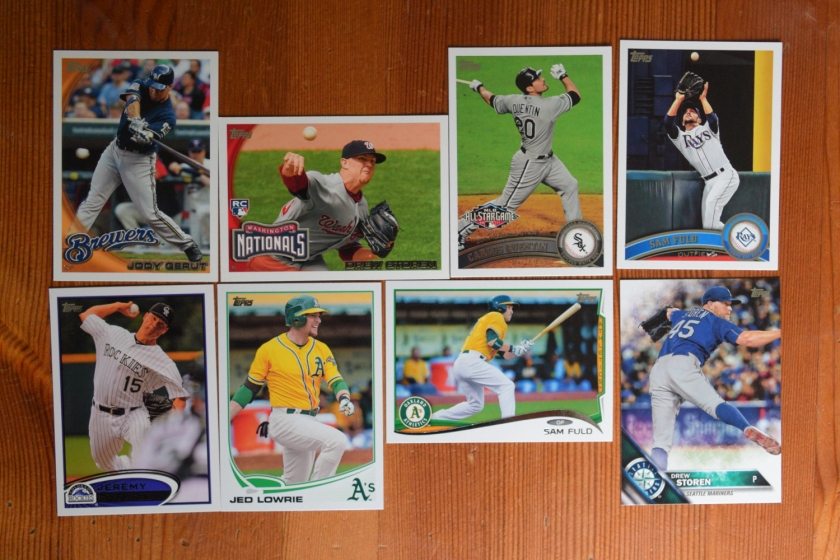 I’ll start with the unexpected stuff. Buried inside the Giants cards were a bunch of cards of Stanford guys for my Stanford project. I think these kill my Update needs for 2010–2017. It’s always fun when trading partners remember who the Stanford guys are. Unlike with team collecting, keeping the Alumni names in mind is the kind of task that I don’t expect anyone to be able to do. That Matt has cards from a half-dozen different guys is pretty impressive. 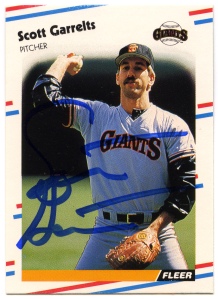 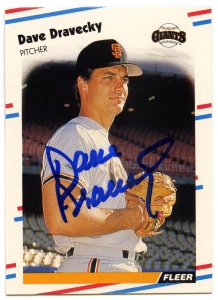 There was also a lot of pre-2010 Giants stuff. On the top of that pile though were these two autographs. I gather that Matt did a fair amount of non-Brewers through-the-mail requests before focusing his collection on his All-time Brewers project. Garrelts and Dravecky are two semi-obscure guys who happen to be near and dear to my heart though since they come from the Giants teams I learned to love baseball with. Heck I mention each by name in my remembrance of Candlestick post.

Garrelts is one of just four players* who played 10+ years in the Majors and only played for the Giants. I have fond memories of him both being great in terms of signing everything I had in Philadelphia as well as being a solid starter who I saw almost pitch a no-hitter.

*Also on the list, Jim Davenport, Robby Thompson, and Matt Cain. I’m tempted to try and get signed 8×10s of each of them since I’m already half-way there (I have Davenport and Thompson). The hardest part of this project idea is that I can’t find any Garrelts 8×10s available anywhere.

Dravecky meanwhile was our ace whose cancer comeback game in 1989 is still the most exciting sporting event I’ve ever watched. I’ve been to bigger and more important games but I’ve never been in a crowd which was so into the game. Every pitch, every moment was important and none of us knew what to expect. 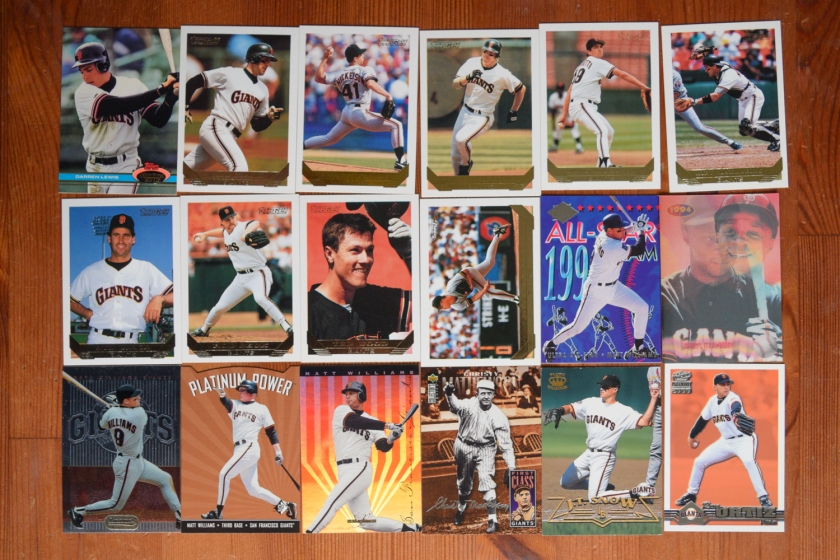 The rest of the Giants goodies included a bunch of 1993 Topps Gold—a set I’ve always liked—as well as an assortment of other 1990s stuff. Leaf Limited is one of those sets I’m surprised that I like. Sportflics (sorry, Sportflix now) is always great fun. I’m not sure how Matt keeps coming across Pacific cards but those are always appreciated. 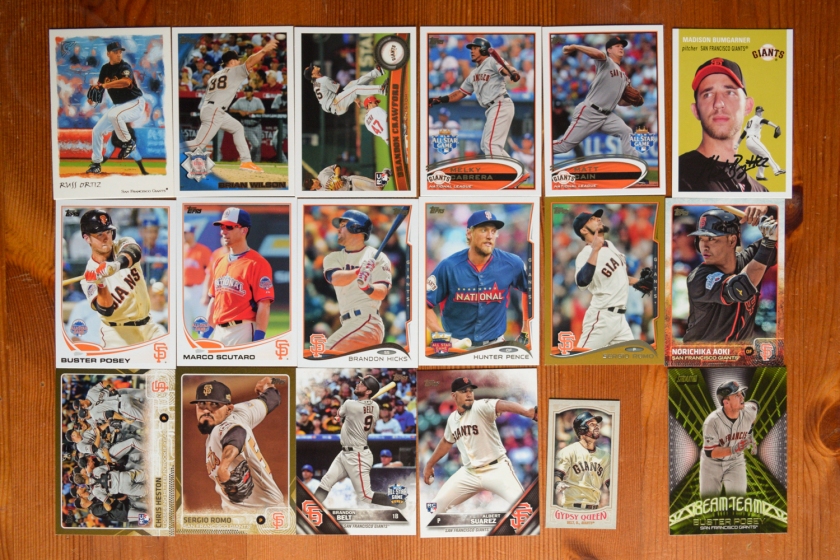 2010–2016 Update cards and more Gold cards continue to fill in some holes left over from RobbyT’s huge mailing. The 2015 Gold card of Chris Heston’s no-hitter is probably my favorite of this batch. Also that 1954-designed Madison Bumgarner Topps Archives card amuses me since his signature includes #22—a number he’s never worn in the Giants organization. Twitter suggests this was a signature lifted from the 2006 National Showcase but I’m still shaking my head at Topps not just deleting the uniform number. 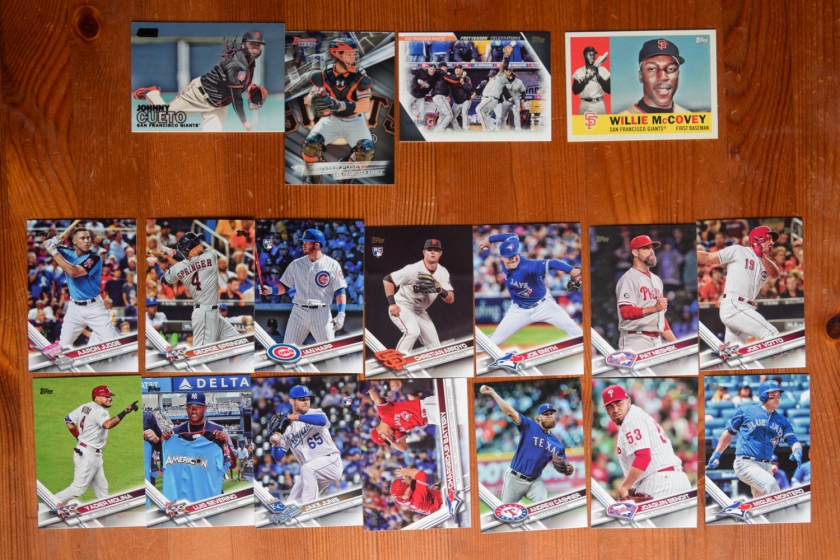 And a last handful of Giants cards. I did not have the Postseason Celebration card for the 2014 World Series so that’s a lot of fun. And the 1960-designed McCovey is both fun and infuriating in how it shows both the potential of Archives in re-imagining cards from the past as well as the pitfalls in not being true to the original design. In this case it really bothers me that the name text isn’t fully-justified.

This image also brings us to the bulk of the mailday—namely 2017 Update. Matt’s mailing took me to 297/300 complete for the set* which is far better than I ever expected to get.

*Depending on how you count I could actually have 295/300 or 298/300 complete instead. I’m missing cards 96 (Brett Phillips), 193 (Orlando Arcia), and 269 (Craig Kimbrel). I also have two other slots—172 (Jason Hammel) and 257 (Alex Wood)—filled with Gold or Foil parallel versions of the cards. And I do actually have card number 269—only I have the Pedro Martinez variant rather then the guy who’s actually in the checklist. 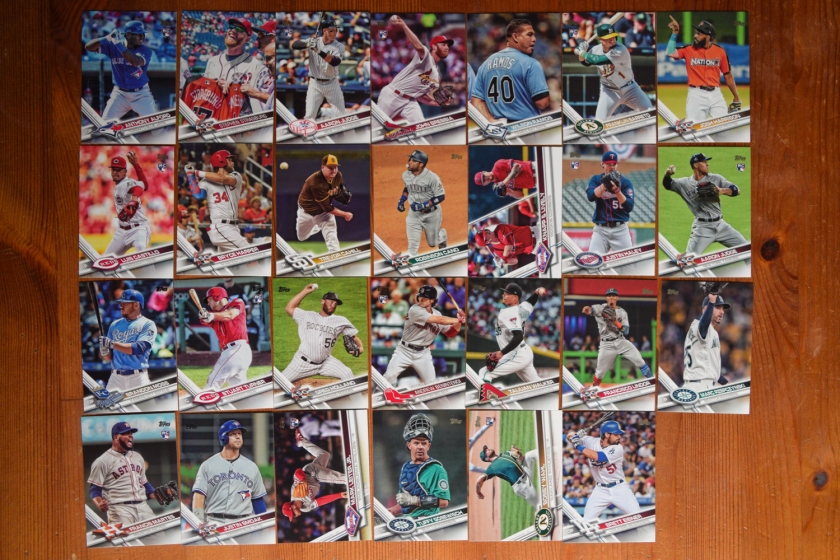 Looking through these cards and I’m starting to wonder how I want to break them down into pages. Right now of course everything’s by-the-number. But since the set is complete aside from the Brewers I can think about how I want to split things up. I’m always inclined to put the Traded and Rookies with the rest of the team but the All Star, home Run Derby, Highlights, and Debut cards are a different beast.

Anyway I’ll have the summer to think about it. Probably longer since unpaging a set and re-sorting it is the kind of thing I’ll backburner for a long time. But this confirms that I won’t be going after Update again this year. Yes on the Giants. Probably yes on the rest of the cards which would’ve been part of the Traded sets form the 1980s. But I’m not feeling it with rest of this set. Too much rookies and stars bloat for my taste and not enough difference in the All Stars and things to be fun.

Still I’m very happy to have this one essentially complete. It’s a wonderful way to close out my first full year back in the hobby and it’s nice that it comes via trade since exchanging cards over Twitter has turned out to be the best thing about the latest incarnation of the hobby. 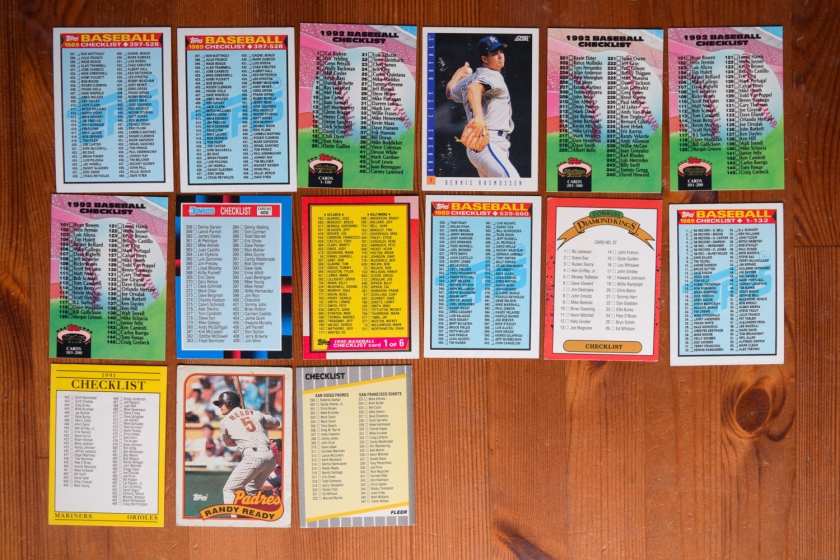 To fill out the package and protect the other cards from moving, Matt tossed in a dozen or so dummy cards. These don’t warrant too much discussion but I’m amused that they’re mostly all checklists.

I’ll readily admit that I never gave much thought to the checklists when I was a kid. I didn’t like pulling them in packs and even now I feel weird specifically purchasing them whether as part of a set chase or as an extension of my team sets search.* At the same time not having them in the sets also feels wrong.

*A few of the 1960s checklists feature Giants players.

As cards that I never really looked at, seeing a dozen of them all together kind of forced me to take a closer look. I’d never noticed that the 1989 Topps checklists called back to the 1979 design before. I never realized that the 1990 Topps checklists were organized by team. I’m amused that the Donruss Diamond Kings checklist includes the Diamond king ribbon. And I’m kind of appalled at the computer-generated graphics on the Stadium Club checklists.