This summer has been spent going through storage and getting rid of anything not worth keeping. It’s been a lot of work. And it’s been a lot of fun. For every pile of things that I dump, there’s a pile which is a joy to rediscover and see. Much of what I’m finding is baseball and sports ephemera—chiefly programs and scorecards. I’ll slowly migrate those into my current collection and eventually post about them.

This post though is about finding a cache of cards that I truly thought I’d tossed decades ago.

And I found my gateway drug to baseball card collecting. Not sure why I saved these but I think they're rubber banded by puzzle/series. pic.twitter.com/w57dqozxUY

Yes there are some dupes in there. pic.twitter.com/gVSGpmGx4l

Also found a 1993 baseball factory set box. Only it's not full of baseball cards. pic.twitter.com/FBmlbEJ5ZF

I don’t think I bought packs of these though. My parents weren’t big fans* and I didn’t have that kind of money anyway. I do remember getting a box from my uncle for Christmas. Based on the contents of that Topps box, it looks like I got multiple boxes over two Christmases.

*As a parent now I’m inclined to agree with them.

*Finding these allowed me to better figure out my timeline of when I got organized collecting cards. Garbage Pail Kids obviously took up my shoebox phase as well as my rubber band and deface everything phase and definitely prevented me from having any major regrets with how I kept my baseball cards.

Have a lot of Series 3-9. So nothing super exciting. I selected a couple dozen for old times sake. pic.twitter.com/UPMWR26sh6

I went through, sorted the lot of 1000+, and pulled out a couple dozen cards that I either remembered fondly (Half Nelson for some reason is especially resonant) or which I enjoyed now (Mouth Phil and Tooth Les are the only baseball-themed ones in the batch). And began to wonder what the hell to do with the rest. That very day it turned out that Cards From the Attic was looking to acquire a bunch of vintage Garbage Pail Kids.

So we hashed out a trade. I sent off ~1000 Garbage pail kids and he sent me a bunch of vintage baseball cards and a big lot of Giants mish mash. This is the biggest trade I’ve done. It feels nice to clear stuff out and send it away. And it’s wonderful to get exciting things I want in return.

Oh, and I used my peeled-off cards as bumper cards for the package since I figured they’d be a fun joke to pass along. Boy was I right.

Wow! Last time I trade with @vossbrink. I send him a bunch of 50's cards and he sends me a bunch of peeled #GarbagePailKids. hahahahahahahahahaahahah pic.twitter.com/SABpzjkz07

It was fun to watch a lot of the “OMG that brings back memories” responses. A lot of the collectors are my age as well and very clearly remember doing this. It’ll be fun to see how these peeled-off cards live on as they get forwarded to new people as bumper cards. And it’s always fun when the joke side of a package ends up generating more discussion than the real content.

Anyway, to what I received! 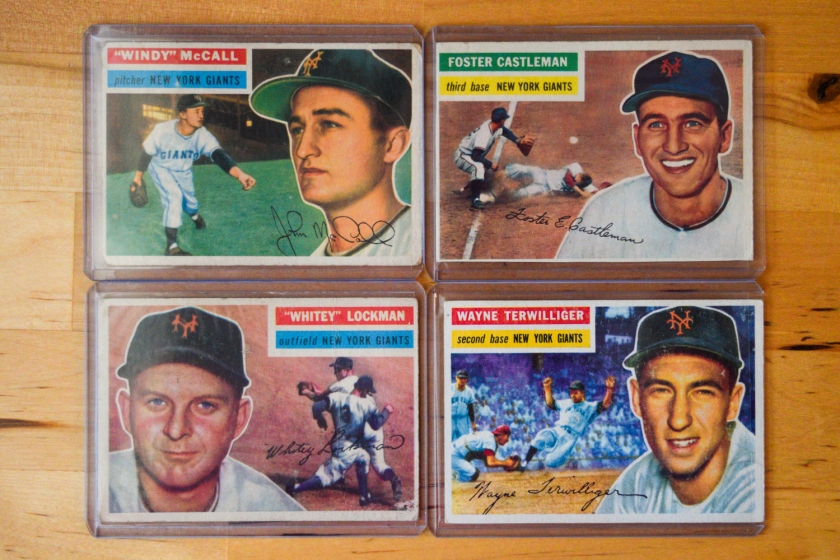 Four 1956 Topps. One of the best set designs Topps has ever made. I like it even though it has fake signatures. It’s always fun to get cards of New York Giants too. While 1950s cards are something that still gives me that “always wanted some of these when I was a kid” excitement,* collecting memorabilia from the New York Giants is an additional joy. I particularly like the low-angle action image on the Wayne Terwilliger card.

*Partly because I never got past 1960 in my 1-per-year project way back when. 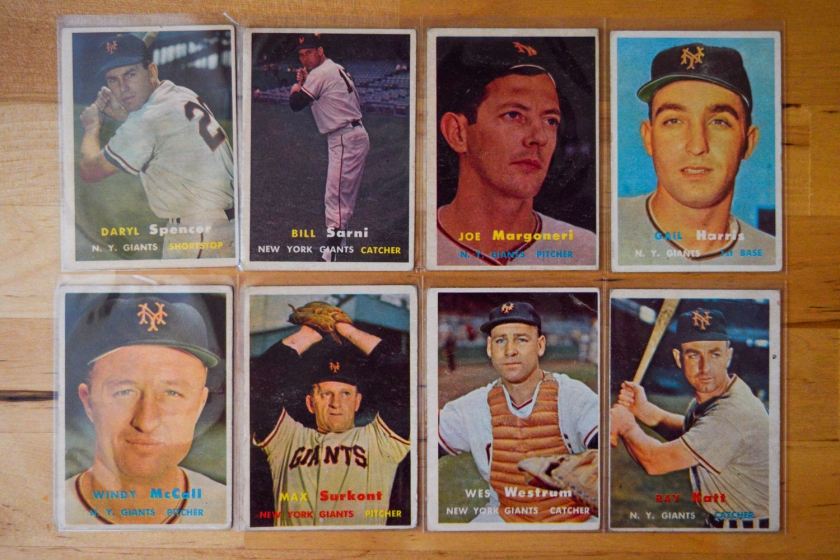 Eight 1957 Topps. I’ve come to increasingly like this set. It’s still a little weird in the way it uses color but I enjoy the commitment to photography and the way it’s a super-minimal look that’s closer to the 1970s Calbees and a lot of modern Stadium Club than most anything else Topps has released in the past 60 years. It’s also fun to get to 18/25 complete on this team set and begin imagining what it would be like to complete this even while I recognize that three of the remaining cards do not run cheap. 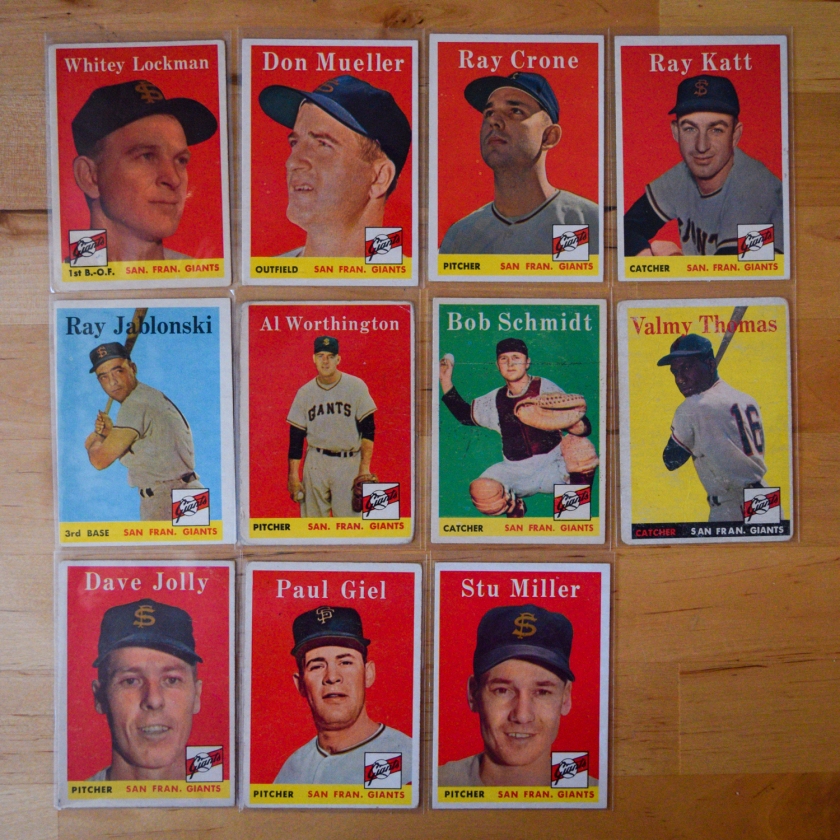 Eleven 1958 Topps were especially fun to get this year as the Giants have been celebrating their arrival in San Francisco 60 years ago. This set is always weird to me since most of the Giants are depicted in the prototype caps that they never actually wore in San Francisco. As fun as it is to see cards of the first San Francisco Giants, there’s a weird mirrorverse feeling in seeing these caps. Only Paul Giel’s cap here is the one I’m familiar with.

I’ve also always had a bit of a love/hate relationship with the painted-out background in these cards. I like them when they involve baseball poses since the silhouettes give me a sense of baseballness and posing tropes—a connection I made when viewing Mike Mandel’s Baseball Photographer Trading Cards—but with the head shots I’m less enthusiastic.

There’s also the way that the Giants team set in 1959 is two-thirds red cards. With colorful sets like this one, one of the most-appealling things is seeing all the different colors on a page. That doesn’t happen with the Giants and, as much as the red backs remind of the classic Cracker Jack sets, I find myself wishing there was some more variety.*

*This complaint of mine also holds with 1954 Topps and how all the Giants cards in that set are yellow or white instead of any of the more vibrant colors. 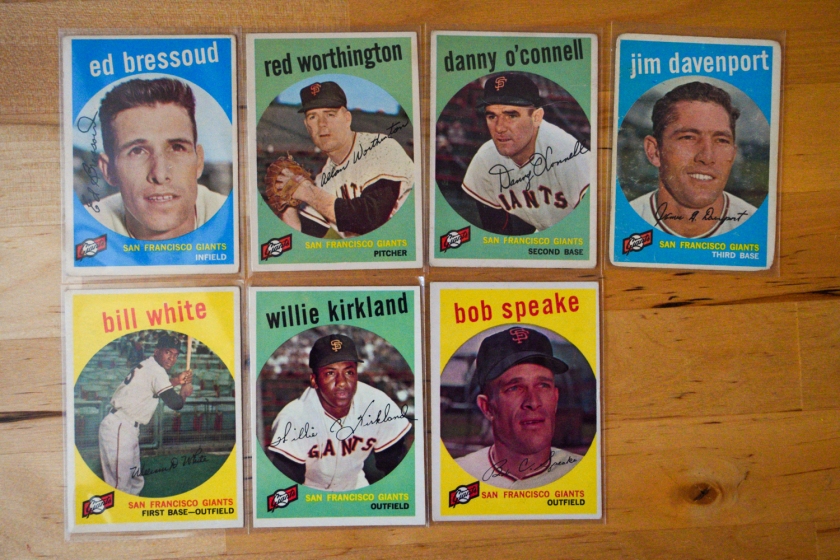 1959 Topps is a better mix of colors though the Giants are pretty much limited to just cyan, yellow, and green. That the cyan and greens seem to come in two different shades livens things up. Also there’s something about the circle portrait and all-lower-case name font which livens these up and gives me a sense of “wake up, The 60s are coming.” As with 1956 I like the signatures on this design. 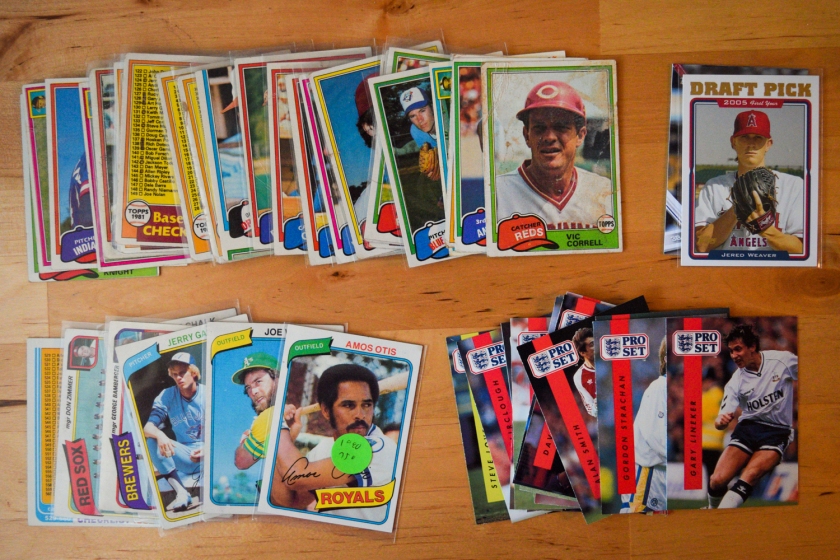 And a bunch of dummy cards for packing filler. No golf this time. The 1990-91 Pro Set soccer cards are a lot of fun—no Roy Wegerle but the Gary Lineker derp face is awesome. The 1980 and 1981 Topps beaters are pretty enjoyable too. I only ever had a pack each of those as a kid and, while I’ve gotten Giants team sets since then it’s nice to see samples from the rest of the league.

Cards From the Attic also sent me a big box of 80s/90s Giants mishmash. I’ve taken a quick look though and that’ll require a second post on here to describe it. I can say though that it looks to be enough cards and duplicates that my kids and I will all get plenty of enjoyment out of it. I’ve been creating stacks of Giants cards for each of them.* I intend to put those into multiple gift packs over the next year and it’s always great to find more to add to their piles.

*Much of Robby T’s mailday is here too.

All told, I’m super happy with converting over 1000 Garbage Pail kids into Giants cards. I’ve had a ton of fun sorting through this trade already and I know there’s literally hours of fun to come from it. Thanks Cards From the Attic!

3 thoughts on “GPK for Vintage”