When it rains it pours. I’ve been back in New Jersey for a few weeks now. Acclimating to the horrendous weather. Getting the kids up and running for school. Re-stocking the house after having emptied the larder before vacation. It’s been a lot of work. This week though I got some help in the mail in the form of multiple bubble mailers containing cardboard therapy.

The first is from Marc Brubaker who’s managed to reload with a huge, interesting mailday before I’ve been able to put together a viable return to his many previous maildays. Heck I’ve not even finished a roll of film yet (three more frames left!).

I didn’t photo this but wrapped around the cards was a handful of 20-pocket tobacco-card pages. I’d mentioned offhand on Twitter that I needed to get a few of them so I could page my Kings and Queens of England set and well as some random other minis. Marc noticed and duly sent them my way. Very cool. Very Nice. Things look much better in pages now.

To the cards! We’ll start with the Giants cards and just go in chronological order. That 1987 Opening Day checklist is the epitome of a card I’d never buy but which I’m happy to slide into a binder sheet. The idea of spending money on a checklist card just feels wrong to me. But then I think I’ve been permanently scarred by checklists since I pulled a lot of them when I was a kid. Did I ever get any of the big hit cards? Of course not. But I sure could pull a checklist. Looking through my childhood collection and the number of checklists I pulled in even oddball sets like Donruss Action All Stars or Topps Mini Leaders still surprises me.

The highlight in this batch though is the 1994 Stadium Club. I had a few packs of these in a box of un-paged cards that I’d dropped after the strike pushed me out of the hobby. I know that I wasn’t particularly struck by the design back then. I kind of love it now. Peak 1990s nostalgia with its pseudo dymo labler and ripped paper aesthetic. The backs are even better.

And the photography. Where 1991 Stadium Club looks kind of disappointing now, by 1994 Topps knew what it was doing and photos like the Will Clark or Rod Beck cards still look good. The Kirt Manwaring on the other hand is at a whole different level as it’s possibly the best card of a very good career of baseball cards. Plus the multiple exposure things satisfies my action-card mini collection as well. 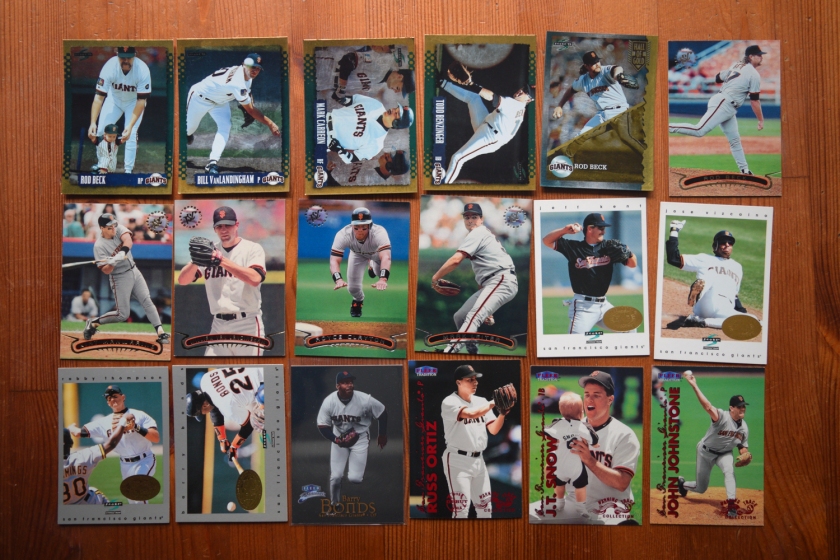 Moving into the 1990s that I missed. The 1995 Score Gold Rush is very cool. The Mark Carreon card in particular shows how Score was using opaque white ink to make the player pop out from his surroundings. 1996 Stadium Club is not a set I react to nearly as well as 1994 but it’s nice enough and the Royce Clayton card where he’s diving into the bag is fantastic. I’m glad Marc pointed out that some of these are silver parallels. I never would’ve noticed a difference.

1997 Score meanwhile is a set which I like the look of. Nice photo-centric design and the white border really frames the image well. I only have three cards though so these four parallels now outnumber them in my binder. It’s a bit weird to me that Premium Stock and Hobby Reserve are basically the same pack-inserted parallel just in different series of the product release.

The 1999 Fleer Brilliants Barry Bonds is an interesting card in its super-premium way. And the 1999 Fleer Warning Track parallels are like the Score parallels and basically double the number of cards I have from that set. I do enjoy the JT Snow photo with his kid (same with the Rod Beck photo here as well) and can think of a number of photos from the 1990s which featured ballplayers with their children.

2004 Topps Opening Day cracks me up, I still have no base 2004 cards but am somehow getting cards from the other sets which use the same design. That Fleer card is nice even though it’s clearly an Upper Deck design and totally signifies the deathknell of the Fleer brand. And I think the 1972 mini is from 2013 Archives.

The last bit of 2018 cards includes my first real sampling of Topps Archives this year. This is a product I want to like but the caliber of the design mimicry is the kind of thing that drives me crazy*. Things like the uncentered name font on the 1959 design or using the wrong colors (and not in a way that improves anything) on the 1977 design just bug me. Which is a shame there’s a huge potential in this line to just have fun. Anyway, since it’s not a product I’ll ever buy it’s always fun to get a sampling.

*Heritage is close to this problem too but is a mostly better-constucted set.

This batch also includes my first Donruss/Optic card for this year. As with Archives, Optic is not a set that I’ll ever buy so it’s fun to have a sample to take a proper look at. That shiny stuff isn’t my thing except for my interest in how it’s actually made.

Marc is also one of the few guys who send me Stanford cards. I’m always impressed. It’s a lot of work for me to keep all those names in mind so I never have any expectations for anyone else to do it. Sure, it helps that there are a decent number of Stanford guys who have been associated with the Astros* but even then it’s a lot of thinking about my collecting goals.

And it’s not just Astros here. Marc filled a lot of holes. Or, well, not holes exactly but many of these cards I don’t have and have been plenty happy sorting them in to my Stanford album. The Stadium Clubs—especially that Jack McDowell Members Choice card. The Score Gold Rush. The Upper Deck SP. All of them have a place in the binder and help jazz things up with examples from sets that are underrepresented.

Mike Mussina is the one Stanford player that people do tend to remember. MArc included Lots of his cards that I don”t have. The Score parallels are great. Donruss Team Heroes is one of god knows how many Donruss sets from this time period. It’s always nice to get a new Heritage card although the image quality on this one is pretty dire. Someone upscaled a small image a bit too far.

The Al Osuna O Pee Chee is great. I don’t have many of those in any binders. The Stephen Piscotty first Bowman is also fantastic. I’m not a Chrome guy but it’s nice to have a few around. His Archives card is also the first from that set in the Stanford binder as well.

And finally there are a bunch of Ed Spragues I didn’t have from the 1992 Upper Deck, yet another wonderful 1994 Stadium Club, to those fantastic Silver Signature parallels in Collectors Choice. Plus another sample from 1997 Score to top things off. 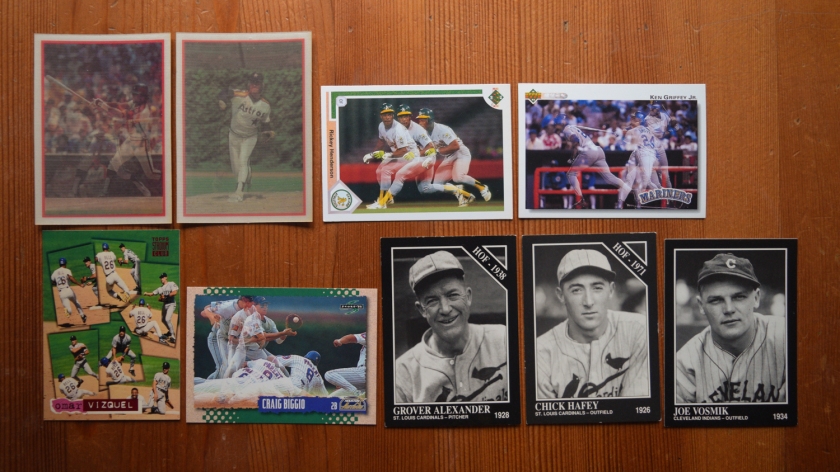 Marc’s thoughtfulness goes even beyond remembering the Stanford guys though. He’s also been hitting cards from my mini collections. In addition to the 1994 Manwaring card I mentioned earlier, there are another half-dozen action-related cards. Some, like the always-enjoyable Sportflics cards and multiple-exposure Upper Deck cards are things I know about. Others, like the Omar Vizquel 1994 Stadium Club with six different images are complete surprises. I also had no idea that Score even jumped on this bandwagon in 1995.

The other mini collection here is my Photographer collection. Conlon cards are always appreciated in this area.

And finally comes a selection of cards that I’m not collecting but have mentioned maybe a couple times as thinking about starting a collection of. Specifically Hawai‘i and putting together a collection of guys who were from there. El Sid is one of the first names on that list.*

Any Duke card is also great. This is a set I’m unfamiliar with so I’ve looked up the checklist and added Bob Mathias to my searchlist now as well.

Holy moly that was a lot to go through. Marc hit five different areas I’m collecting. That’s the kind of thing which really sets a trader apart and yeah super duper impressive since I get the sense he’s doing this with a bunch of other guys on Twitter too. Thanks so much!

7 thoughts on “Mailday from Marc”