A couple weeks ago I found yet another small envelope from Marc in my mailbox. This one caught me by surprise since I’d just received a decent package from him. When I opened it up I found a bit of Fire. Topps Fire. 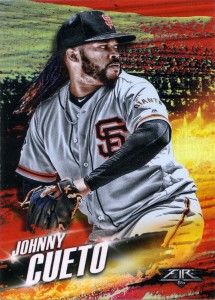 That’s a McCutchen base card and a Cueto foil card. I don’t know the proper terminology since this set isn’t the kind of thing I pursue. Marc sent me my first Fire card ever in his previous PWE and these will go next to it in the binder.

Looking at these cards makes me realize how many of the things I dislike in card designs are things I really like as oddballs. As a 200-card set, stuff like this just makes me shake my head. As a 30-card set? I could see myself getting into it. The same goes with Panini’s unlicensed cards which have all the logos airbrushed out. Something about the small checklist makes me much more accepting of quirkiness.

Part of this is because the small checklist encourages a smarter selection of players. You need stars who aren’t diminished by an over-the-top design or who can salvage something logoless and bland. Finding 200 of those guys? Tough. Finding one per team? Much easier.

Anyway, both these cards look way nicer in person and a lot of that has to do with the fact that all three Fire cards I have are of star players. I just wish that Cutch and Stretch had different backgrounds since this design is really asking to be different on each card.

Like this Piscotty background is a nice change of pace. Seeing pages of this over and over again would make my eyes bleed. But seeing one page of craziness? Totally fine. And having just one card amidst a page of otherwise sedate designs really livens things up.

I’ve got to admit, I much prefer Fire to Gypsy Queen. Where I understand what Fire’s doing, I remain absolutely confused by GQ. From the HDR action photos to the pseudo-vintage look which hearkens back to the days of studio photographs, I’ve never been able to wrap my head around what this product is trying to do. Once you toss all the “errors” and variants into the mix? No. Fucking. Clue.

Still it’s nice to have a few in my albums since I’ll never ever buy them. Gives a nice variety to the page and that’s always fun. Plus I would never have noticed how weird it is to have such a different white point in the photo compared to the background of the card if I hadn’t had to scan this for this post. It makes my brain hurt since it makes it clear how the antique background effect is just a printed border.

Continuing with the Stanford theme. Marc included a Bowman Chrome of Mark Appel. This card also doesn’t scan well. Chrome goes black and the border becomes a weird grey halftone. On the plus side, scanning Chrome reveals a lot about how it was printed since the change in reflectivity shows where there’s an opaque white and where there isn’t.

As much as I don’t like the way Chrome looks with photography, I’m fascinated by the printing. Opaque white has such promise for all kinds of cool printing effects* and I’m a bit disappointed that it’s used as essentially a flood for covering up metallic stock. At the same time, it’s not used much in printing at all so to see it live and in the flesh is still exciting.

*If I were designing things I’d be going nuts with opaque white ink on medium-dark papers where the ink would create highlights and the black could create shadows.

Two other cards in the PWE. The first is a 2016 Update card of Brandon Belt as an All Star. One of the disappointing things for me upon reengaging with the hobby is how boring All Star cards have gotten. I mean it’s always fun to get an All Star card of a player on your team, but I grew up in the days of the dedicated subsets which had their own distinct All Star designs.

Coming across an All Star card was something special and those designs still trigger a ton of nostalgia when I see them. If I were baseball card king this is one of the things I’d bring back. Just slapping the All Star logo on the card front without even changing the team name is some laziness. 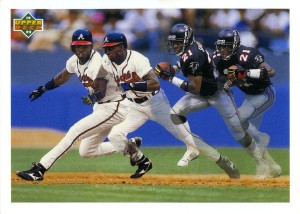 And last, the super-cool Deion Sanders action card. This goes with the rest of my Action collection even though it’s very much riffing on the concept rather than actually being action. I always liked this card too. Was cool when I saw it in 1992. It’s still cool now.

Looking at it now and I can’t help but notice how smart Upper Deck was to basically remove all the 1992 design from this and let the photo stand on its own. No baseballs. No drop shadow. No names. Just a photo and we all knew exactly who it was. Part of me smiles at seeing him carrying a football since as a cornerback that wasn’t his main job. And the rest of me remembers that ridiculous high-stepping pick-six celebration.

Thanks Marc for the very cool mailday.

3 thoughts on “Fire PWE from Bru”