The last mailer I received last week was yet another box of cards from Marc. Where Artie had gotten ahold of my Giants searchlist, Marc had found my setbuilding list and realized he could do significant damage to my junk wax set builds—specifically 1990 Upper Deck and 1991 Donruss.

Junk wax sets builds are really the best thing for trading. Most of us have tons of duplicates and there’s no real reason to keep them around. The hardest thing is finding someone who’s building a set since so many people already have them completed or can just buy a factory set for, at most, the same price as a wax box.* As someone who’s never built a set before though it’s great to have a list out there that people are happy to be able to contribute to and get some unneeded cards off their hands.

*Why build? For me a lot of it is finishing builds I’d started as a child. Plus the experience of getting to know a set over time rather than sitting down and sorting the entire thing all at once is very different.

Marc also found almost 100 1991 Donruss cards that I needed. In addition to finishing off my Giants team set I’m now at 747/770 complete there.

Now it’s a race to see which I finish first between 1978 Topps, 1986 Topps, 1990 Fleer, 1990 Upper Deck, and 1991 Donruss. They’re all super close. 1978 has the advantage and disadvantage of being the only one which I’d want to purchase singles of to finish though. Yes this is more expensive but none of the other sets have any cards that are worth enough for buying singles to be worth it.* They’re too complete for buying packs to be worth it either. So there’s a very real likelihood that I’ll have those uncompleted for a long time.

*When I get down to the last couple cards though I’ll probably give up and just buy them.

Still, there’s something fun about having all the set builds hit 90% complete and that page to shrink to an extremely reasonable size.

Marc seemed to recognize that this would happen so he also included just enough 2014 Topps to take me over the 50% mark and get me to move it to my set build page. It’s still heavily Series 1 but a build is a build and it’s nice to get some of the bigger-name players out of the way.

The Pujols card in particular is especially nice and shows how nice this set looks with colored uniforms. 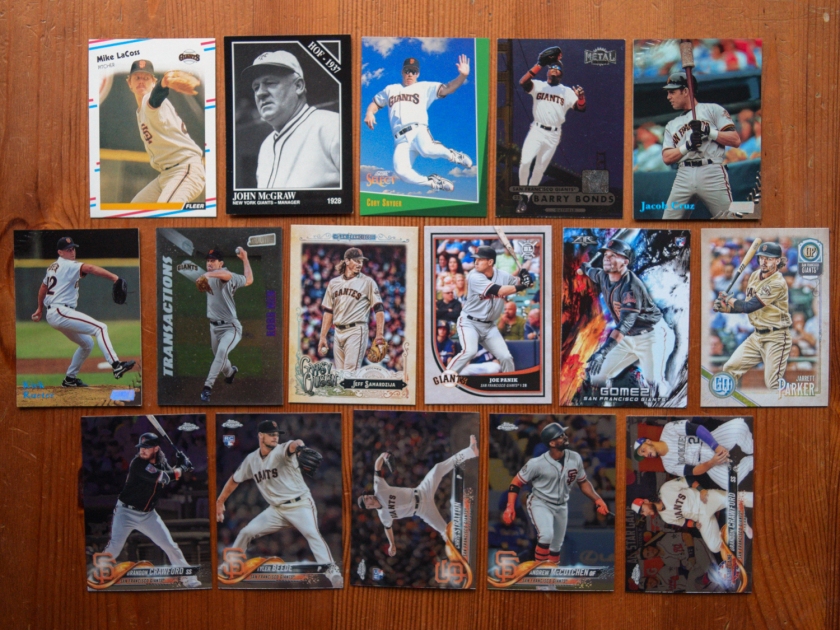 Of course, Marc being Marc couldn’t leave it at that. He included a bunch of assorted Giants. The Conlon McGraw is wonderful. That Select Cory Snyder photo is something else. The Metal Universe Bonds is downright sedate compared to other Metal Universe designs I’ve seen and I like having the Golden Gate Bridge in the background. And 1998 Stadium Club is kind of a clusterfuck of post-press indiscipline with three different colors of foil stamping plus embossing.

The 2018 cards are quite welcome and represent the sets I refuse to purchase. I like that Marc sends me Fire one at a time. I’m not I could handle a huge batch of them. Same thing goes with Gypsy Queen actually; one or two in a mailing is fine but a whole batch of them would give me the Photoshop disaster eyetwitches.

Chrome meanwhile is a set I still don’t like but am becoming increasingly intrigued by ever since Robby T pointed out that they’re printed wrong-reading. I’d already been looking at them sort of closely because of the opaque white ink usage but seeing that there was even more going on has me looking at them even more closely.

The best I can guess is that the cards are printed in reverse on clear plastic, then the opaque white gets printed on top of that, and finally the printed side of the plastic gets fused to the foil stock. So that cool glossy finish is the clear stock and because things are printed in reverse you don’t have to worry about now the colored ink lays down on top of the opaque white.

Marc also included these poker chips—sorry Topps Chipz—for the ever-increasing “stuff I can’t binder” collection. Buster Posey is from 2013. Madison Bumgarner is from 2015.

I honestly don’t know what to think about these. They’re actually kind of nice to handle as they have the heft and finish of proper clay chips* instead of feeling like tiddly winks. As a result I don’t really feel like putting them in 2×2s even though that’s probably the best place for them.

*Reminding me of when I was in college and getting real clay chips was actually hard back in those early days before poker was literally everywhere.

Yes there’s more. Marc continues hitting all my collecting interests with a bunch of Stanford guys including a Mark Appel die cut and a Mike Mussina Sportflics. I think my favorite is the Jack McDowell 1993 Studio with the foil-stamped signature but I did LOL at the Piscotty with the sharpied annotation as to what was “special” about it.

*I went down a looking at screens rabbit hole on SABR a year ago if anyone wants to learn more about print screens.

Anyway it‘s really weird to see the mix of screens on the same printed piece and I’m not sure why Topps chose to do it this way. Or it could very well be the printer’s choice and Topps, like most people, isn’t too invested in what screening technology is used. It definitely adds to the weirdness of Ginter though. We’ve already got an old-time look coupled with modern action photography and image processing. And we’ve got an artificially aged paper looking stock which results in a different white point in the photo compared to the borders. So let’s just toss a couple different methods of printing into the mix too.

Rounding out the batch are a handful of Scott Erickson cards, a handful of action photos, and a couple Conlon St. Louis Browns.  I’ve been neglecting the Erickson PC so it’s nice to add a few more-recent ones. I think I only had Twins cards before. I continues to be amazed at the variety of the multi-exposure action cards and am surprised to see the gimmick had legs well into 1996. The 1991 Score Lenticular disc is awesome. And I have to decide of the Conlons go with the other Conlons or if I should break out a St. Louis Browns section of my binder.

6 thoughts on “Merry Christmas from Marc”