As usual, while I went to MoMA to see the Yugoslav Architecture exhibition, I wandered around the rest of the building to see what else was on display.

There was a nice exhibit of Charles White’s work which demonstrates his versatility as an artist. All kinds of mediums—charcoal sketches, woodcuts, prints, paintings, photographs*—with a wide range of styles as continued to produce work from the 1930s through the 1970s.

*Admittedly the photographs weren’t presented as “art” but were still a nice personal set of portraits of White’s milieu.

The change in styles is kind of wonderful to see as it offers a way of learning about American art from the nostalgia-focused 1930s art to the social activism of the 1960s and 70s. Many of the pieces weren’t my kind of thing although I could still appreciate how all throughout White depicts facets of life that aren’t the “standard” image because he’s centering non-white subjects.

I however loved his sketches and woodcuts and also really liked his journey to Mexico with Elizabeth Catlett where he worked with worked with the Taller de Gráfica Popular.* White’s linework is fantastic and working in a print shop allowed him to embrace how prints and distribution are the true disruptive vector in artwork.

*Which while I didn’t mention by name in my Mexican Modernism post is definitely a huge portion of Mexico’s artistic and anti-fascist identity.

The “big” show at MoMa was their Bruce Nauman retrospective. I did not venture to the PS1 location so I only saw part of the show. I walked through but didn’t take a lot of note. I very much enjoy Nauman’s tweaking of the “is that art” question that I can hear my kids asking me. I just didn’t feel drawn to spend a lot of time looking at or thinking about the pieces.

I did enjoy how so many of them operate as selfie-bait. This kind of thing has become the scourge of museums as every exhibition seems to need some sort of social media tie-in now. Many of Nauman’s pieces though create art by intentionally removing people from the piece.* When people insert themselves back in to take their photos, the result is an image which pretty much ruins the point of the artwork.

*The video cameras which show your movement but only if you’re in a location that can’t see the monitor are probably the best example here.

So many selfies inserting themselves back into the artwork. I couldn’t help but smile a little.

I always take the time to at least walk through the permanent collection. This time there was a small exhibition focusing on artwork made by artists as they aged. So rather than focusing on a greatest hit, this show organized each gallery around one artists work as a way of showing how their work has progressed.

It’s a fun way to see the art and there were a lot of artists featured who I’ve liked for a long time—Agnes Martin, Helen Levitt, Ellsworth Kelly—and artists I don’t—Philip Guston, Joseph Beuys—but all of whom make up a decent canon of artists you’re supposed to know and recognize. It’s always a good thing to learn more than just the greatest hits of these guys.

My favorite section was David Hammons’s work since I was less familiar with it than I should’ve been.

Then I went to the next floor and hit the greatest hits galleries. They were packed even though this was a Wednesday visit during early January. I walked through quickly but said hi to all the cliches and grabbed a quick photo showing how crowded it was. 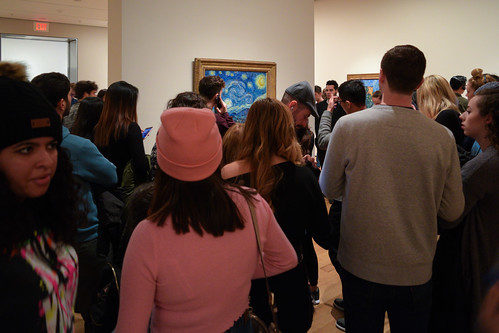 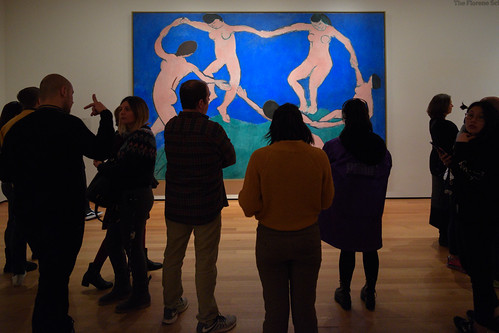 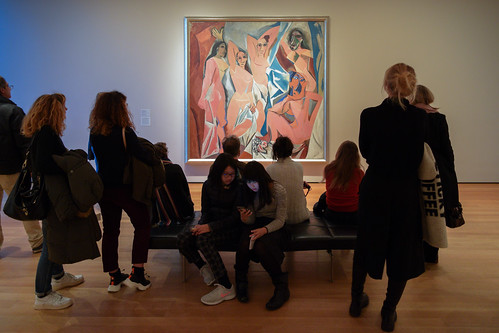 The cliches are good to see and remind myself of what they look like in the flesh. How large—or not— they are. Details I always overlook in reproductions such as unpainted portions of the canvas. The out-of-gamut colors that can never be translated into standard process inks.

It’s good to see them and I found myself being jealous of the school groups who could just come to MoMA and learn about art. My kids are getting close to the right age and pretty sone I’ll be taking them here with a whole different set of eyes and a whole lot of patience.

3 thoughts on “Also at MoMA”