This Christmas Santa signed my kids up for Boomer’s Kids Club. It’s a good deal and they’re both looking forward to going to a lot of games this spring. My eldest caught the Autograph Bug last year* and has successfully gotten my youngest excited about it as well. Hopefully we’ll be able to hit the fanfest so they can be satiated a bit up front.

*To be fair, I also got reinfected a bit.

Their excitement has rubbed off on me and I’m starting to check the opposing team coaching staffs and seeing who the ex-Major Leaguers are and whether they have any cards. They’ve also reminded me of my experiences collecting autographs at San José Municipal Stadium when I was a kid. 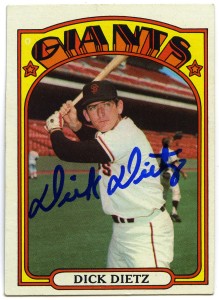 When I was a kid here was no COMC or Sportlots available to buy individual cards. I had to go to my local shop and hope that there was an affordable common available. The first time I did this was when I learned that Dick Dietz was going to be the San José manager. I didn’t recognize how the photo showed a glimpse of pre-enclosed Candlestick but I did bring this with me to a number of games until I was finally able to catch him after a game. 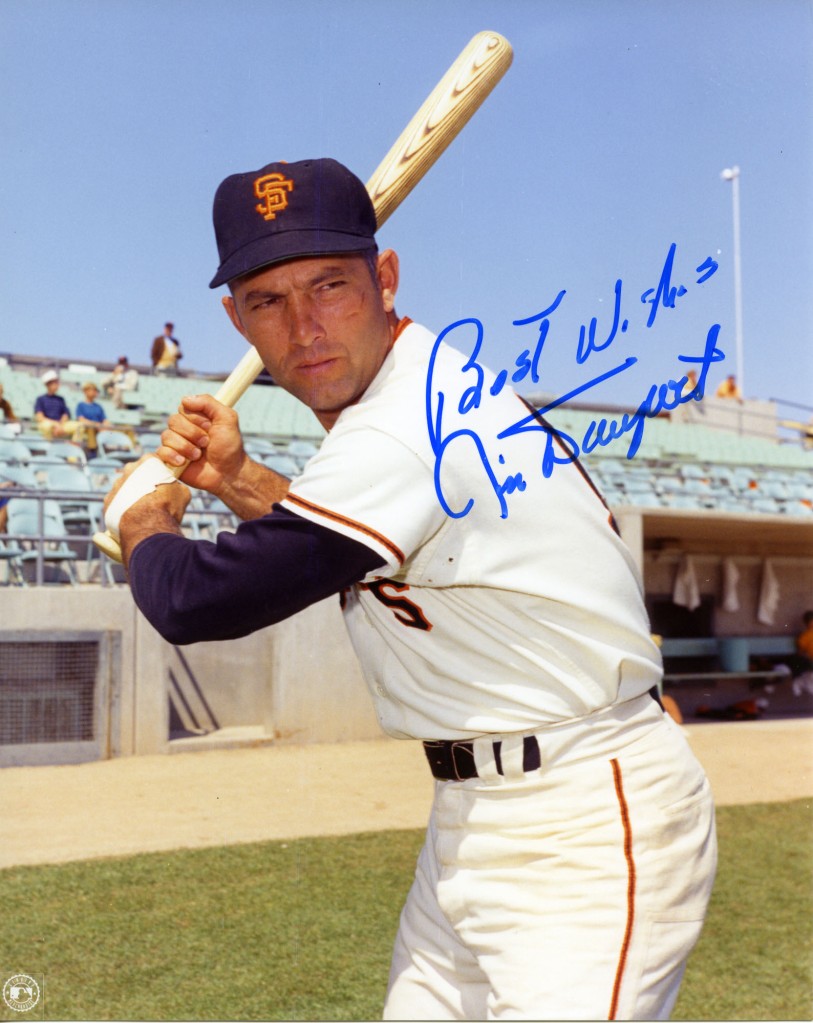 Jim Davenport was also a coach for the San José Giants at the time. I tried to find a card of his but had no luck in that department. Thankfully, being in Giants country, I was able to acquire an official 8″×10″ photo and the resulting signature is one of my favorites.

The only other signed 8″×10″ I have is a Robby Thompson photo I got signed in Philadelphia. I have since realized that this means my two signed 8″×10″s happen to be two of the four players who played over ten years in the majors but only every for the Giants.

I kind of want to get the other two now but they’re difficult for the exact opposite reasons. I’ve been unable to find an 8″×10″ of Scott Garrelts and Matt Cain is readily available but expensive.

I was usually unsuccessful getting autographs of rehabbing Giants players. They tended to get mobbed and their appearances even then were sort of circus affairs. Mike Benjamin though was my one success here. Both these cards are pulled from packs. I don’t know why there are two different pens. I suspect I got signatures on two different days and he just used whatever pen he was holding for everyone.

Draft picks though were a different scenario. This is back in the days before Bowman had cards of all kinds minor league players and it wasn’t like I had access to just pick whatever card from those sets anyway. Instead my choices were limited to cards from sets I owned. So definitely Topps Flagship and Topps Traded. And in 1991, Score as well. So if a player showed up on a First Round Draft Pick or a Team USA card, I made sure to note whether he was playing in San José.

Unfortunately, the Giants were not so great at the draft in the early 1990s. I was kind of prospecting here. Not in terms of building up inventory, just in terms of trying to get prospect autographs and hoping one of them would hit it big. And yeah they can’t all be Mike Mussina.

These signatures were mostly from hanging over the dugout rail but I do remember waiting forever for Hyzdu to come out from the clubhouse one night.

My luck with prospects carried over to visiting teams as well. Like when the Modesto A’s came to town I got Rossiter and Grigsby but Jason Giambi didn’t even make the trip (I had his Team USA cards).

Oh, and while I did eventually get the 1993 Topps set, this Grigsby is another pack pull. No I don’t know why I was buying packs still when I expected to get the set but it might’ve been specifically in hopes of finding the Gold cards.

Where I did end up having a lot of fun and success is with the opposing coaches. No this isn’t a ton of signatures but I was only doing this a couple of seasons and was mostly limited to the cards I had on hand.

But coaches are nice and seem to be in the game because they love it. They know they’re supposed to be role models and they’re all in that teaching mode. Opposing coaches are easier to get after the game too because usually the visiting team goes straight to the bus.

My favorite in this bunch is obviously Mario Mendoza. It’s not everyday you get someone who has something in the game named after him—no matter how infamous it is.  But Rick Dempsey is great and Tim Flannery became a Giants coach and yeah all of these remind me of those summer nights (always nights) closing out the ballpark when I’d be hanging by the bus or the clubhouse doors and my mom would be watching them put away the field and turn on the sprinklers.

Yes I’m totally looking forward to watching my kids embark on this trip as well.