As I, and my son, have gotten more and more into Trenton Thunder games I’ve started paying more and more attention to Kenny’s Twitter feed and blog. In addition to being a prolific trader whose Zippy Zappings are somewhat legendary, he’s a big-time Yankees prospector and autograph seeker. While the prospecting life isn’t for me, knowing who to expect to see in Trenton and who the likely big deals are is good information. At some point I suspect my kids will take over this knowledge base but for now Kenny’s my go-to.

Since Kenny is located in New York City he has access to the Staten Island Yankees (also the Brooklyn Cyclones but we don’t talk about the Mets) and sees Yankees prospects fresh out of the draft. When he realized that the Trenton Thunder were having their open house last Tuesday he put together a package of Staten Island extras and sent them to me and my boys so we could start prospecting on our own.

I suspect he’s also trying to convert them into being Yankees fans. Many of the local kids around here have turned their backs on their parents’ teams and have instead begun to support the Yankees. It would be infuriating if it weren’t so pure. Trenton is a good experience and the past couple years with Aaron Judge, Gary Sanchez, Miguel Andujar, and Gleyber Torres all making the jump from Trenton to New York City means that the kids are really just following the players’ careers and being excited about them making The Show.

This would be super concerning to me if the Andrew McCutchen trade hadn’t gone down the way it did last year. But seeing Abiatal Avelino in Trenton and then seeing him play in San Francisco later that same season? Super cool. We also got to see Billy McKinney, Brandon Drury, and Justus Sheffield last season and none of those guys are with the Yankees anymore either. My kids have already learned that the Yankees like to trade for players during the season and that minor leaguers at the Trenton level are frequently exactly who gets sent the other way.

Anyway I got my first Zippy Zapping on Monday. Just in time. Inside were three piles of cards—one each for me and the boys.* Plus a bunch of other ephemera from Staten Island. Like I said, I think he’s trying to convert us.

*Yes plural. The youngest is old enough to go to games now and has been jonesing to go for a while. He’s super pumped for the season and is more than ready to join his big brother.

One thing the Trenton is great at is giving away the program at every game. It’s fantastic and welcoming. I thought perhaps this was just a Trenton thing but since Staten Island appears to also do it maybe it’s a Yankee thing. I’d be impressed if it were.

I think this is a complete run of monthly programs from 2016. The first one has an embarrassingly low-resolution cover image but it’s really interesting to see how much roster turnover there is form the first program to the last one.

Also two ticket stubs from last season. I may as well link to Kenny’s post about these games. I’m kind of shocked at the prices. Trenton isn’t cheap but is cheaper than this (San José meanwhile papers the house so everyone feels like they can afford to buy BBQ and churros). I hope the food at Staten Island is affordable since this seems like it would be tough to take families to.

On to the loose cards. Two of the Chromes are for me. The Abreu is for getting signed at Trenton. And the other three Minor League cards are to be divided among the three of us.

Kyle Crick is the guy the Giants sent to Pittsburgh (with cash) for Andrew McCutchen; who then turned into Abiatal Avelino and Juan De Paula. De Paula meanwhile just got shipped to Toronto with Alen Hanson and Derek Law for Kevin Pillar. So in a sense the Giants got rid of Crick, Hanson, and Law and received Avelino and Pillar in exchange.

Kyle Holder is currently with Trenton with Albert Abreu. David Sosebee is with the Yankees’ AAA club in Scranton. And Josh Roeder is now in the Marlins organization. Travis Phelps meanwhile played a couple years in the Majors for Tampa Bay.

Like the Abreu, the rest of the cards were intended for autograph hunting. I didn’t have time to scan anything before the Open House so instead I’m scanning what got signed  and moving into a rundown of the event. 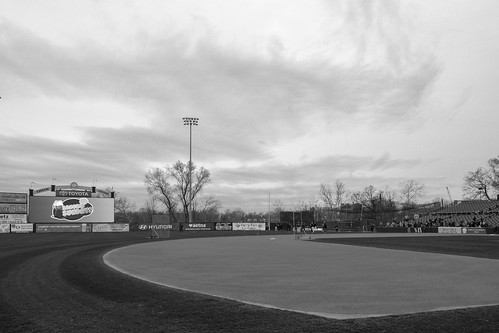 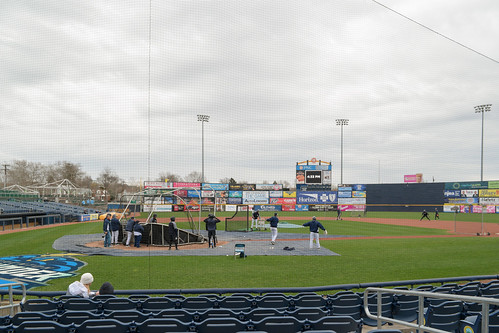 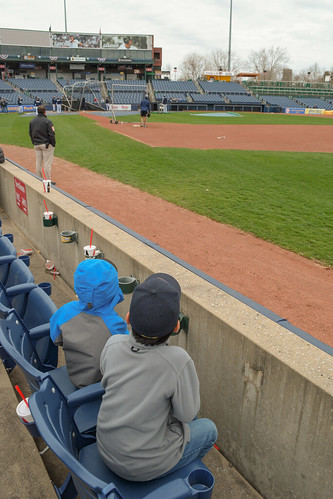 I took the boys directly from school. The event started at 3:00. We got there around 3:45 and just wandered around the stadium before grabbing our $1 hot dogs once batting practice started. They loved just watching the players hit.

One of my favorite things as a kid was to get to the park early and watch the teams practice too. There’s something very calming about it and it warms my heart that the boys share my mindset. I’m glad we can all watch together.

Around 5:00 we went up to the autograph line. They were excited—a little too excited—so I gave them each a Thunder baseball and told them we’d try the cards another day. Juggling everything was going to be tough. Which meant I was the only one getting cards signed. I gave the notebook method a shot this time and it’s pretty nifty. Definitely a timesaver if you have a lot of cards you’re managing.

The autographs were managed so well that everyone finished signing like 20 minutes early. Finished in this case means that all the fans in attendance had gotten everyone’s signature. This is just as well since it was pretty chilly and as much as I like minor league ball, the way the players get treated (and not paid) is making me feel really guilty about enjoying it.

Anyway, to the autographs. Two non-team-set cards are of Jorge Saez and Trevor Stephan. Saez has been stuck in AA for too long. He’s better than this and is a perfect example of many of the things wrong with the way Major League Baseball treats minor leaguers. He enjoyed the blast from the past with this card featuring him with the Blue Jays though.

Stephan was the only top prospect to show up (Albert Abreu was on the list but ended up not being in town) and sort of carries himself like he knows it. Still nice enough but definitely someone who’s already been asked to sign a ton of autographs.

Kenny sent us three 2015 Staten Island Yankees team sets. A lot of the players in this set are with Trenton. I don’t normally go for minor league sets but I figured, what the hey, if I have the cards I may as well try and get them signed. Jeff Hendrix, Jhalan Jackson, and James Reeves are ones I recognize from last season. Kyle Holder and Brandon Wagner are new to me but joined Trenton after I’d stopped going to games in June.

Of note here is how different Holder’s signature looks from the certified one Kenny sent.

He also sent us three 2016 Staten Island Yankees sets. Only a couple of these guys are with Trenton. For now. Ben Ruta was on the team last year and Angel Aguilar was a late late promotion. Kenny suggests that a lot more of the guys in this set will make their way to Trenton before the year is up.

I like the way they signed in the white space on these cards. A marked difference compared to the the signed cards that Kenny sent me.

I’ll sit on my copies of the team sets for additional autograph purposes. The boys are already making noise about putting theirs in the binder. Yes they also want to get them signed. I’m going to have to talk to them about how it’s one or the other for now.

That finishes up my Zippy Zapping. Thanks Kenny for getting the new season off on the right foot!

I’m not sone with this post though because I also brought a few of my own cards as well. Jason Phillips is the Trenton bullpen coach but played catcher for the Mets for a few years. And I’d grabbed some 2018 Topps Heritage Minors cards from Tampa since that’s the lazy method of prospecting that appeals to my lower attention span. Unfortunately only Stephan showed up at this event.

The main autograph thing I was planning on working on was a team ball. I had one and I gave each of the boys one as well. I’m not planning on a compleat comprehensive ball but it’s nice to get one with 25 signatures on it. They’re good reminders of the event and the boys are both in love with theirs.

My ball is is an Official Eastern League ball. Supposedly they’re switching to the generic Official Minor League balls this year but I like having things being as specific as possible.

Image 2 is manager Patrick Osborn #13 who signed last but all the players left him the sweet spot.

I’m not going to run down the boy’s baseballs the same way since we all have the same signatures. I gave them the cheaper fake-leather balls since they have the Thunder branding and I was (correctly) expecting these to get beat up a little. Kids love their treasures but also tend to love them to death.

It’s a lot of fun to watch but also a serious marker into observing when they‘ll be ready for nicer things. They can graduate to real leather balls once they can buy them themselves and handle them better.

At least they’re happy having these in cubes and displayed in a place of honor on their desks. Could be worse. They could’ve been chucked into the big box of athletic equipment with all the other balls. 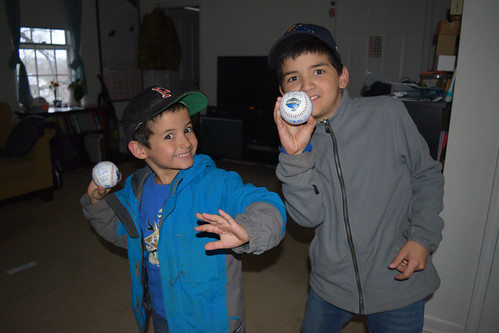 All in all a very successful afternoon. Worst part of the day was getting them to calm down after we got home. They’re both amped and ready to go to their first game and are even asking to go early so we can watch BP. April 14 can’t come soon enough for them. Good thing they’re part of Boomer’s Kids Club. It’s going to be a fun spring.