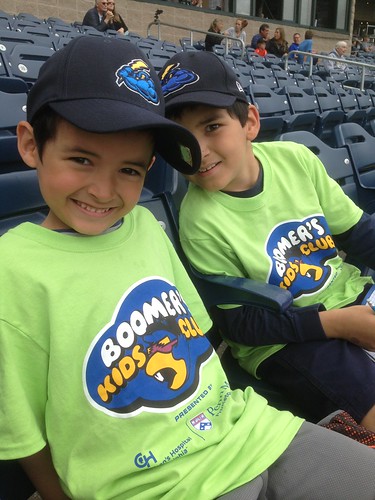 Last Christmas Santa gave the boys each a membership to Boomer’s Kids Club. Is a good deal, $45 total for three tickets to 11 games this season. Trenton’s a great minor league experience* but the kids club is a ridiculously good deal even if we miss some of the games.

The first game was on Sunday a week ago. We arrived at the ballpark early so we could pick up our stuff—tshirt, membership card, tickets, giveaway pennant—without getting caught in any lines. After that we wandered around the ballpark until it was time to get in line for the ceremonial first pitch with Boomer.

We didn’t know what to expect (although I wasn’t expecting it to be a real first pitch where you keep the ball) but it turned out to be pretty funny. All the kids got a tennis ball and went to the mound. Boomer then got ready to catch and ALL the kids threw at the same time. 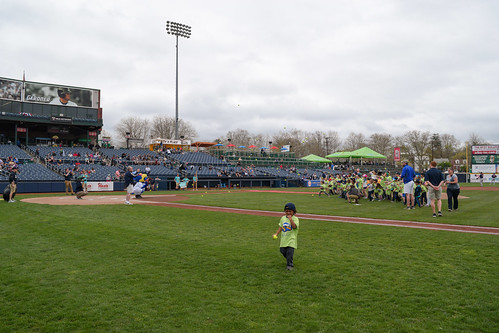 The game was good too. Not great—lots of walks and deep counts which meant that the game went an hour longer than the usual Eastern League game and clocked in at three and a half hours—but Trenton beat Portland 10–0 and the hometown fans went home happy.

Was an odd blowout. Trenton just kept stringing a few hits and walks together, scoring a run or two in four of the first six innings to go up 6–0. Meanwhile the Trenton pitcher kept getting himself into jams (6 walks, 4 hits, 1 HBP in 5 innings) and then somehow getting out of them. The game picked up once we got into the bullpens and Trenton blew it open with a four-run 7th.

My sons had expressed interest in staying after the game for some autographs. So I figured we may as well kill the entire day at the ballpark. My eldest realized a few months ago that a few of the guys in his 1991 Topps set were now coaches in the Eastern League. I helped him do some of the homework in terms of figuring out who to look for. In the case of this game, Portland’s managers was former Reds catcher Joe Oliver.

So my eldest pulled his card and I pulled a 1991 Donruss dupe for his little brother and we camped out by the visitor’s clubhouse. Looking for coaches is a lot easier than looking for players and while I understand the allure of prospecting, getting an autograph from a World Series winner who had a 13-year Major League career is a pretty safe bet. He won’t become a star, but he had a good career.

They were good. Nice and patient and when Oliver signed for them they held the cards all the way home until they could put them in their binders.

I brought a few cards for myself as well. The Upper Deck is the one I wanted but he was nice and signed the 1992 Topps as well.

The Portland pitching coach is Paul Abbott. Unfortunately he’s not in the 1991 Topps set nor did I have enough duplicates and extras to give the boys each a card (though they’ll obviously be splitting up my collection at some point anyway).

This didn’t turn out to be a problem. The boys were still kind of enthralled by their one autograph that they weren’t ready to get another. They haven’t done the in-person card thing yet but I think they’ll get there this season.

I also managed to get the two Thunder players who are currently on the Yankees 40-man roster. Since neither of these guys made it to the Open House I’m happy I got them so early in the season.

Domingo Acevedo is a tough signer but he was in a good mood on Sunday, hanging out by the dugout after closing out the game. I wasn’t expecting or planning to go after him but I saw an opportunity and moved fast.

Albert Abreu is a good signer and I got him after the Wednesday 10:30 game. I love the Wednesday morning starts. Nothing like watching a game and getting it over before the day really begins. The Thunder lost this one but it was a crisp two and a half hour game which would’ve been even faster had there not been some sloppy fielding.

A very nice way to start the baseball season properly. Two games. A bunch of autographs. Two happy kids with fan club merchandise who are pumped for the season. Between this and Little League there’s been a lot of baseball going on in the house and this spring feels like it will turn into a good summer.

11 thoughts on “Start of the season”