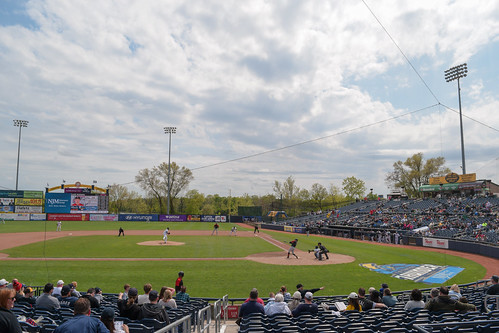 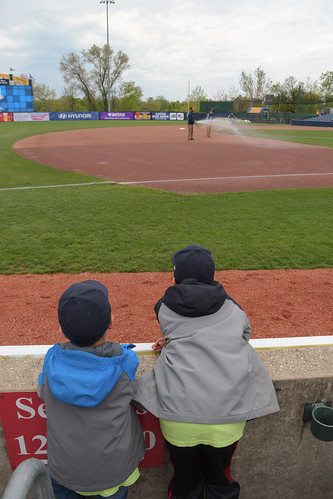 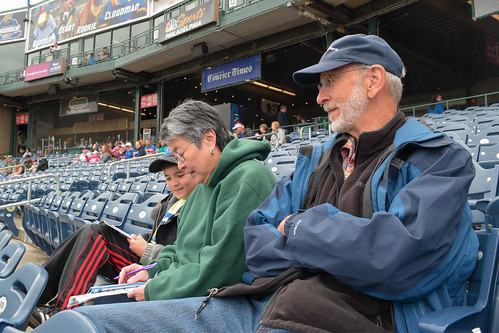 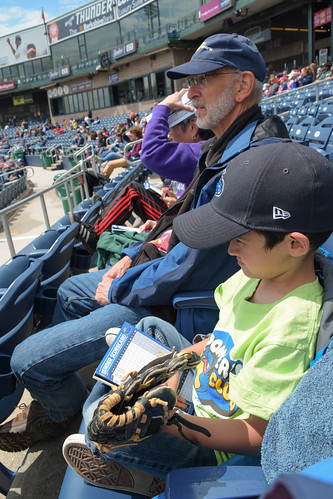 Trenton’s back after a roadtrip and so we’re back at ball games. The first one was a Sunday game against Erie. The boys opted to stay in the stands rather than partake in the pre-game activity this time. Despite the rain on the drive over, the weather cleared up by game time and stayed hot and sunny until after the last pitch, at which point it got cold and overcast and threatening again.

Not the best game but we got to see a few new players. Rony Garcia got his first AA start and put together a nice-looking line of 5IP, 0R, 0ER, 1H, 4BB, 8K. He wasn’t quite that good but gutted through a bunch of deep counts to get some clutch strikeouts and defensive help. And Brooke Kriske picked up the 2-inning save as the Thunder swept the series with a 4–2 win.

The boys are enjoying the game and they’re enjoying the autograph hunting. With Erie we were looking for the three coaches since they all played in the majors.

Mark Johnson pitched in 9 games for Detroit in 2000. We got him before the game. Nice guy. Went in to the dugout but told us he’d be back. And he came back out and headed right for us. Everyone else on the railing was trying to get the just-called-up Casey Mize (who’d go on to pitch a no hitter the following day) but we weren’t ready for that. Heck we weren’t even ready for Taylor Motter who has cards in the 2017 and 2018 sets.

I don’t have the headspace to stay on top of Eastern League players and transactions. Thunder players, maybe since it’s a consistent team and after seeing a few games you get to know the guys.

Coaches are about the most I can handle. And definitely getting cards for the coaches is way way easier. If the boys want to go nust prospecting they can start acquiring their own cards. So far they seem happy getting coaches and they’re polite and quiet enough on the railing that one of the Erie players gave them each a ball without them having to ask.

The main guy we wanted to get was Brian Harper. He put together a nice 16-year Major League career and, like Joe Oliver, was featured in my son’s 1991 Topps set. Harper also was super nice. Asked us to wait until he got his stuff on the bus and then came back down and signed for everyone. I almost feel like he provided cover for his players to get on the bus (over a half dozen got on unbothered by autograph seekers).

Harper confused the boys by having the Bible inscriptions (this is actually the first autograph I’ve gotten with these as well). I was surprised to see that he changes the inscription for each signature. My two are John 3:16* and John 14:6.** My sons have John 1:12*** and John 14:6. Okay so maybe he just rotates through three.

*For God so loved the world, as to give his only begotten Son; that whosoever believeth in him, may not perish, but may have life everlasting.

**Jesus saith to him: I am the way, and the truth, and the life. No man cometh to the Father, but by me.

***But as many as received him, he gave them power to be made the sons of God, to them that believe in his name.

Anyway it’s provided a decent entree into a discussion about proselytizing and being comfortable stating your faith. Harper’s signing was super gracious and patient. There were a lot of us there who’d brought his cards (this pleased me since it suggests that the prospectors also appreciate his career) and Harper took his time with a nice signature for everyone. Each of these verses works as a succinct summary of his faith and, on the first Sunday of Easter, felt kind of appropriately timed.

And Mike Rabelo, the manager who appeared in 86 games over three seasons in the mid 1990s, was clearly rushing to get on the bus. The boys have better-looking signatures than I do.

12 thoughts on “Another Trenton Homestand”