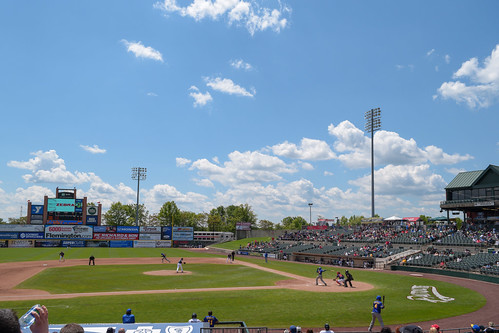 A couple weeks ago I noticed that the Somerset Patriots also had a few mid-week morning starts on their schedule. I’ve been intrigued by the idea of checking out some independent ball—especially with the Atlantic League partnering with Major League Baseball to workshop rule changes—but have never made the drive up to Bridgewater. Last Thursday was the first 11AM start of the season so I figured it was as good a time as any to make the drive.

It’s a nice drive along the canal. Only 35–45 minutes and very pretty for most of the way. Parking is cheap and plentiful and, if I lived along the train line,* I wouldn’t even have to drive. The park itself is pretty nice too. A good size but still cozy with no bad seats.

*Specifically the High Bridge line. I live on the Northeast Corridor so to change lines I have to spend the two hours to go all the way in to Newark and then back out again.

Morning starts are designed around school groups. This game was a combination STEM day and sports-careers day. For older kids there was a pre-game QA session with various community members who worked in sports. I didn’t catch much of this but I was listening to the portion involving a former Rutgers Athletic Director who was asked about paying college athletes. A good question. His answer though was essentially that if they paid athletes they’ll end up unionizing. Very weaksauce and serves as additional confirmation that the athletes should be paid. 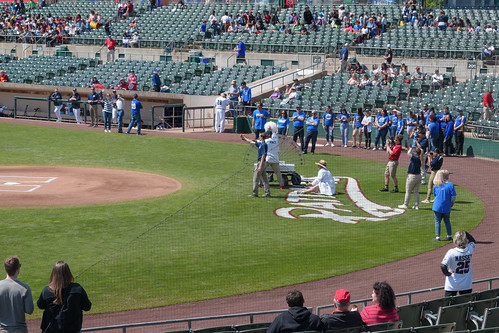 The STEM day portion involved a pre-game experiment/demonstration about how launch angle effects distance where they wheeled out a giant protractor and used a sling shot to launch a baseball at the desired angle. This then turned into the between-innings tshirt toss method. I’m not sure any of the kids got the lesson but if even one of them noticed that 45° appeared to be the best angle then I guess the exercise was worth it. 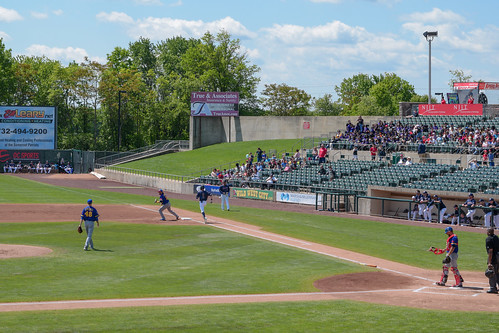 To the game itself and thinking about the rule changes. First off, the 18″ square bases look comically huge. I’m not sure why this is needed. I guess it’s an attempt to increase offense without tampering with the canonical dimensions of the game. Changing the distance between bases from 90 feet would be outrageous. Making the bases 3″ larger though can slip through the cracks. I’m not sure how much offense it’ll create though since it also means that throws to first don’t have to be as long.

No mound visits is weird but wasn’t noticeable during this game due to pitchers not laboring and getting into trouble. This is an observation of its own and I don’t know if it’s just this game or a generic Atlantic League thing but there were very few walks or strikeouts in the game. At Trenton it seems like deep counts are increasingly the norm and that the three true outcomes are working their way through the minors now too. At Somerset? Lots of balls hit in play. It was kind of wonderful even if the fielding was a bit of an adventure at times. 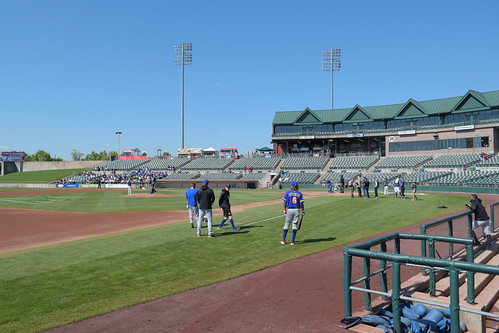 The exciting thing though was, appropriately for STEM day, I got to witness the first day of implementing TrackMan and automatic umpires. This isn’t the first case of implementing automatic umpires but it’s still super-new technology to the game. When I was watching the game I thought it was up and running completely and was amazed at how much of a non-factor it was. Then I noticed the home plate umps subbing out* and found out that they were calling their game but also hearing the TrackMan chirping in their ear.

*4 innings for the first ump. 1.5 for the next two (day/night doubleheader so only 7 innings)

Still, a pretty interesting thing to witness and I want to go back to see how the experiment progresses. Automated balls/strikes is clearly something Major League Baseball needs to implement soon. 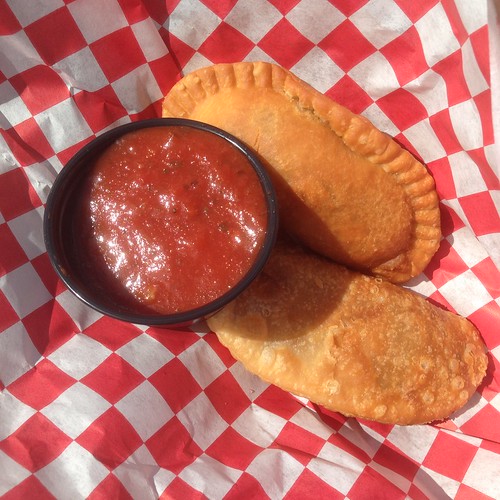 To the food. I wasn’t planning on eating at the game. I usually don’t and once I saw the prices I very clearly wasn’t. $5 for a hot dog. $8 for a foot-long. $13 for a burger. Yes the food looked good but even with the usualy ballpark markups that’s pretty high.* Then I saw an advertisement for their special of the day, chicken empanadas. I would’ve been second guessing myself all day if I didn’t try those. They were good. Not great. About the right value for ballpark food. I’m glad I got them. I also don’t need to get them again.

*I couldn’t help but wonder if the higher prices meant they were paying their players better than Minor League salaries.

And lastly. Of course I got some autographs. Frank Viola is the pitching coach for High Point. He’s definitely one of those players I remember from my youth. World Series MVP in 1987. Cy Young in 1988. A frequent All Star during those years. He had a very good big league career and I was very happy to get a couple of his cards signed. He was super nice and I bet he much prefers the autograph scene in the Atlantic League to the one in the Eastern League. There were maybe a handful of us at the game and we were all the type who like the older players or obscure guys. None of that prospecting/investing crowd that exists at Trenton.

I can see my kids having fun here. I can see myself having fun here again. I’ll definitely be back and will dial in some time to visit Bound Brook as well since it looks to be full of Costa Rican and Peruvian food. 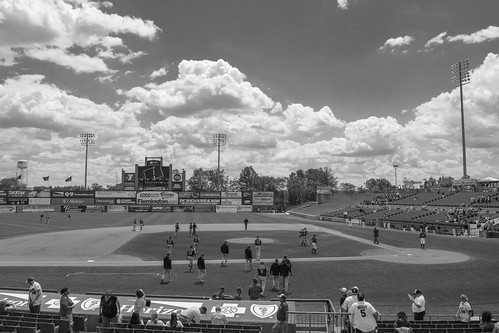