It’s been an interesting couple of weeks in the hobby on Card Twitter. It seems like the big Memorial Day meetup at the Hall of Fame spurred a lot of existential conversation about why we collect, what we collect, and what will happen to our collections in the future.

As a member of the second camp, I love that my sons are enjoying the hobby with me. In a way they’re responsible for bringing me back in but I’ve also had a huge amount of influence in encouraging their interest. I’m constantly trying to balance guidance with letting them find their own path. I want them to find their own interests and I love seeing how they use their cards. I also want them to avoid doing things I know they’ll regret later.

To-date they’ve been content following my interests. Collecting Giants. Tagging along on my autograph searches at Trenton. I worry that they’re only excited about stuff because I’m excited about it. I’ve also realized that it ultimately doesn’t matter.

For example. Last Sunday we went to the Thunder game. I wanted to get autographs of the visiting Harrisburg Senators coaches. Matt LeCroy is the manager. He was a journeyman catcher (and DH and 1st baseman when needed) whose seven-year career was decidedly average. I like getting in-person autographs from guys like this. Seven years in the bigs is seven years in the bigs and being able to tie the autograph experience with the game experience is the kind of thing I enjoy doing.

For my kids though it’s not like they know who LeCroy is. He’s not a World Series winner like Brian Harper or Joe Oliver. He played before they were even alive. But because I had a few extra Topps Chrome cards around I was able to supply them with cards to ask for an autograph when I got my two cards signed. 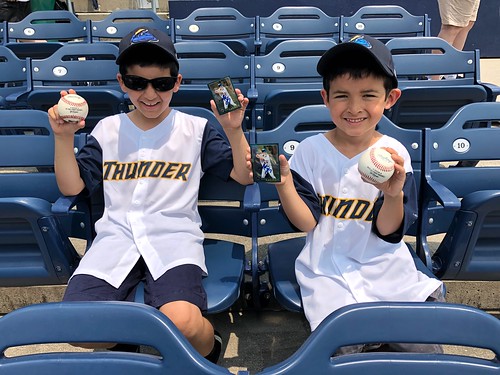 And they enjoyed it. My rule, as with the TTM requests,* is that they have to handle the interaction—maybe not initiating contact but at least waiting and handing the card over and saying thank you. They enjoy it…not just because I do. Getting autographs is fun. Getting them on something specific like a card is even more fun. Not only will they always know whose signature it is, they’ll have the picture and memento as well.

*Where they have to write the letter.

In a decade, no matter what their opinion of collecting is at that time, this Matt LeCroy autograph will be on a binder page with Joe Oliver, Brian Harper, Mark Johnson, Brian Rabelo, and who knows what other autographs that we got together. They’ll be able to look back at that page and remember the season (hopefully, seasons) we were in Boomer’s Kids club and went to a ton of games.

It won’t be about the players. It will be about how they did it with their brother and their father and how the three of us spent Sundays together before other activities got in the way. And they’re sure to get in the way…probably much sooner than I expect or desire.

But for now things have been perfect. We get to the ballpark early. Hang out and watch them set up the field and see the players come out. The past couple times we’ve been on the visiting side of the field the boys have gotten balls from the players. Last Sunday Austin Davidson was the generous player. Unlike with Erie where I was caught flat-footed I was able to get my ticket stub signed for the scrapbook.

As with the autographed cards, I’ll look back on this stub and remember it as part of the experience. Spending a Sunday at the ballpark with my sons. Getting cards signed and balls tossed to us and enjoying the breeze that made the hot sunny day not just bearable but quite pleasant.

I also got the Harrisburg pitching coach Michael Tejera’s autograph. I didn’t have enough extras to give to the kids (and splitting up a Fleer Classic and a Topps Gold Label card between them was likely to risk complaining and hard feelings) but it’s just as well since they didn’t even notice me get this autograph. They were still excited about getting LeCroy.

Tejera had a five season career. Average like LeCroy but he did win a World Series with the Marlins in 2003. This is my first time getting a Gold Label card signed. Pain on the butt to scan but it turned out better than I thought. 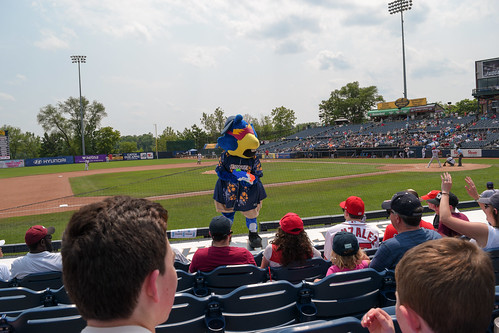 After that perfect start to the day we settled into our seats behind the Senators’ dugout and watched the Thunder lose 4–1 by batting 1 for 12 with runners in scoring position. A frustrating loss but we didn’t care. My youngest managed to keep score for the entire game this time* and my eldest only needs my assistance when things get weird.** The group of Nationals fans in front of us were both good-humoured and funny.*** Boomer even came by with a supersoaker to help everyone cool off.

*He’s just marking the result of each plate appearance for now.

**Like a player getting picked off of first by the catcher.

***I wouldn’t expect anything else from people wearing Sean Doolittle shirts.

As soon as the game ended the sky got dark and it started to rain. But we’d had our fun and I told the boys as much on the drive home. It’s been a fun couple of months. Four games now with the kid club plus one with Little League is a lot of quality time we’re spending together at the ball park. I’m making sure to enjoy it while it lasts.

8 thoughts on “A perfect day”