Last week I took my annual visit to the Cantor Center. No specific exhibits I was looking forward to but I always enjoy walking through and seeing what’s there. 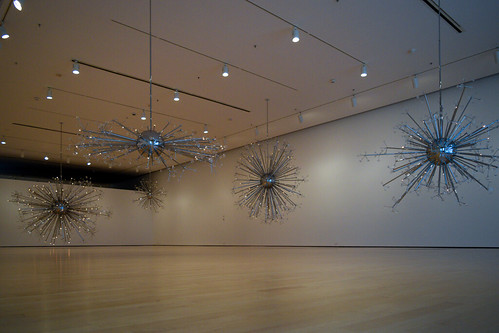 The special exhibition this time is an installation of Josiah McElheny’s sculptures. These were pretty cool in a mid-century way. All the multiverse drawings are neat to see and the sculptures themselves are a lot of fun to take a good slow look at.

The main interest to me in this gallery though turned out to be seeing the latest evolution of how museums have to deal with photography. I’ve seen “no flash” turn into “no photo” turn into “please photo and hashtag.” This show is the first I’ve been to with designated photo spots.

This isn’t a complaint (even though my favorite view of the room was not from one of the two designated photo sites), just an observation about how something that’s clearly selfie-bait (complete with signs around the museum encouraging posting to social media) is also too dangerous to let people photograph freely. Too easy to blunder into a sculpture either by getting too close or backing up and not being aware of what’s behind you and despite their size these are clearly pretty fragile.

There’s an awesome point where you can see both one sculpture and the entire room reflected in that sculpture. I spent a while there taking everything in and getting the full multiverse experience. 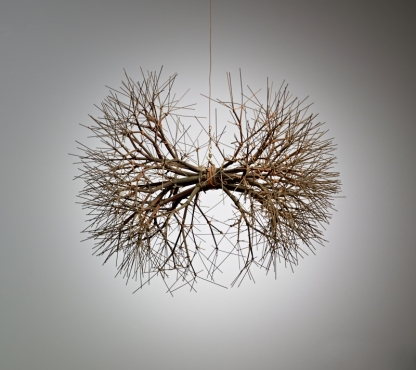 The other big exhibition is a hang of modern art under the theme The Medium Is the Message. I love the idea. Much of the art itself didn’t move me* but it’s a great concept for an academic museum to have since it digs right into the concepts of how the medium itself informs abstract art and how much of modern art is explicitly provoking how the medium itself behaves. This was one of Matt Kahn’s design prompts and it’s great to see that legacy still at Stanford.

*It is however always nice to see Ruth Asawa.

Two of the sections cover abstraction and the idea of artwork being more than the sum of its parts—often literally when considering assemblage. I viewed these two sections as being very similar since the artwork was always about what it was made of and the disconnect between our expectations of that medium and the way it actually behaves in the piece.

I especially liked the third section though which focused on portraits. While the portraits are all paintings, recognizing portraiture as a medium of its own and then interrogating the concept of what a portrait actually is is great to see. In this specific case the museum calls out who is traditionally depicted in portraiture and the disconnect that results when non-traditional subjects enter the frame.

I found myself thinking of how audience comfort works in to this equation as well since very often what people count as a “good” portrait is one which looks comfortably like a traditional rich white person’s portrait. I also found myself thinking about the way photography’s extension of portraiture to almost anyone is as similarly disruptive to our concept of what a formal portrait should look like.

Much of the other galleries were the same and I’ve covered them in previous posts.* However there are a few standouts. The corner of Yinka Shonibare prints was a lot of fun. I like combining his prints with the paintings of St. Michael. I always like seeing Vlisco turn up although I wish there was more of an explanation given for the fabric since it features prominently in each of the prints.

I also liked the small gallery dedicated to providing context to their new Jeffrey Gibson acquisition in that it included samples of items from Sol LeWitt to artisan beading to explain the myriad influences and references that the piece was making.

And I was happy to get a chance to walk through Sequence again. I much much prefer it outside with strong shadows and the clear blue skies which photograph so white in black and white. It’s great to walk through and let my camera’s restrictions guide what I see. This time I let my iphone direct my eye.

One thought on “Cantor Center”