My kids have been dragging their grandparents to the local shop this year. I think they’ve been three or four times already, getting each other packs for their birthdays and capitalizing on grandparent generosity to pick up an extra pack or dig through the box of Giants commons to find something for themselves. It’s fun to see and is very much how I used to spend my summers. It’s nice to be the age when going to the card shop every weekend is all you really want to do. I’ll take mine next week for National Baseball Card Day and I’m sure we’ll have a blast.

As my buying has gotten more specific and focused on older cards, the rhythm of the hobby has changed for me. It’s no longer a summer thing coupled to the games being played. I’m more stuck to the retail cycle that rewards purchases of any kind at certain points of the year. In some ways this is a good thing since it’s not like pre-1960 Giants cards should ever go out of season but it does discourage a certain disconnect from the baseball season itself.

Which is why summer maildays are especially fun for me. It’s nice to just get a stack of cards during the height of the season and be brought back to the current moment. Marc Brubaker sent me such a stack last week. Lots of randomness but at least half of it was cards from this season that have come out during the past month. 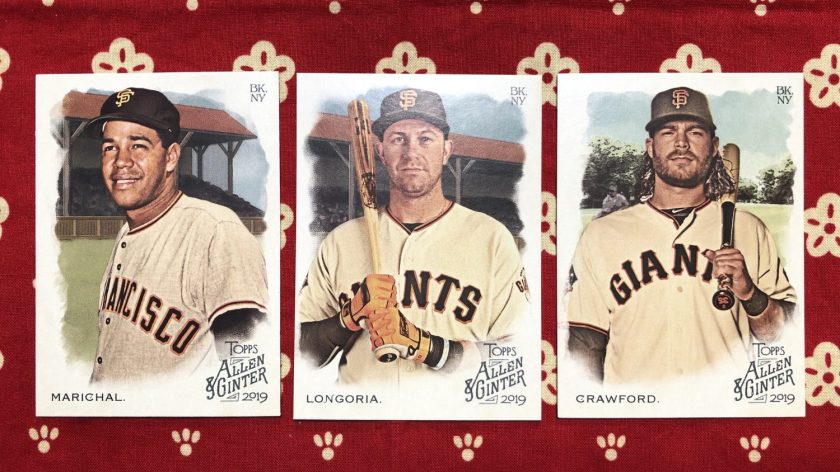 Allen & Ginter is one such set. It’s not for me but I appreciate that Topps has stuck to its guns and kept this brand as distinct as it is. I do like getting a few Ginter samples each year so I’m very happy to see these. I can see why people like these and I daresay that the line gets better looking each year in terms of the image processing.

One interesting thing to note this year is that background images are old parks that have been dropped in via computer. There aren’t a lot of different ones but thankfully Topps isn’t using the exact same cropping. However the fact that Marichal and Longoria are consecutive card numbers makes me wonder if things will look kind of weird when a set is paged up and the same background images show up multiple times per page. 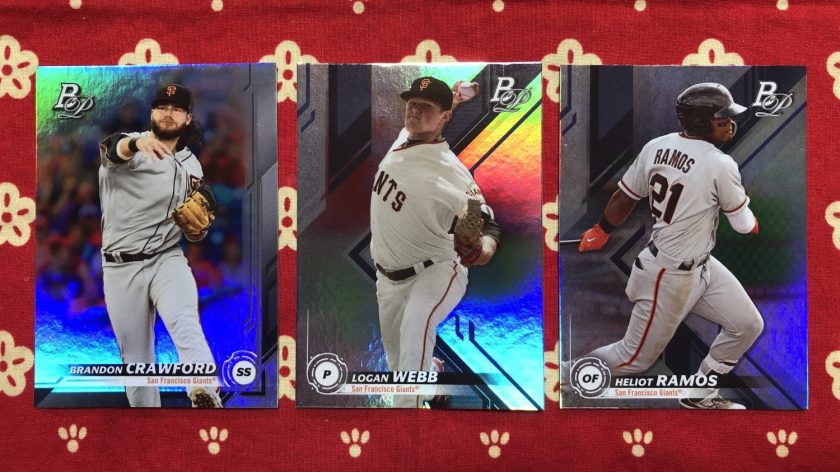 Bowman Platinum is another set that I never buy. All this shiny stuff is not my thing and I guess I’m resistant to sets that look like they should be inserts. Yeah, actually,  I’d probably really like these if they were inserts.

I have to admit though that as I’ve gotten more into autograph hunting I’m beginning to see how cards like these will sign well. Where the silhouetted player and shiny background annoys me as a photo guy, it makes a nice, less-busy place for a signature to go.

Also as I’ve gotten to more and more  minor league games Bowman sets have gotten more appealing. I’m not prospecting prospecting but it’s nice to have a supply of cards for autograph reasons. The Ramos here will be nice if I ever get to a San José Giants game (though San José Muni is pretty dire for autograph hunting now) and may be handy if he’s in Richmond next season too. 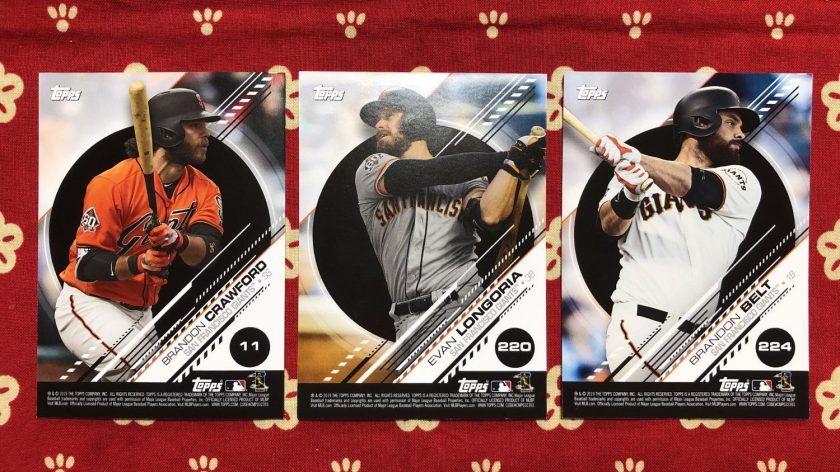 Another new-to-me 2019 set are Topps’s Stickers. These are actually the sticker backs* and unlike previous years the backs both function as cards and are card-sized. Not something I’d buy as a card but I really enjoy them as peeled off backs which are now worth** saving instead of just throwing them out.

*Blank fronts since Marc is actually sticking the stickers into an album as if he’s one of those uncivilized soccer fans.

**For certain values of worth.

I’ve not gotten into the sticker thing yet but the concept is one I’ve long been intrigued by as a soccer fan who’s very familiar with the Panini World Cup albums. I just refuse to commit to a project of collecting 650+ stickers at 20¢ apiece. The baseball album looks a lot more manageable at ~250 stickers although the per-sticker price of 25¢ each still means that it’ll cost more than a full set of Flagship to complete (though at least you get two sets out of it).

Continuing with the 2019 cards we have a Brandon Belt Prizm Red Parallel (I’m assuming). Given how monochrome the Belt image is since all the Giants branding has been Photoshopped out the red is a nice touch of color. I’m also looking at this card and trying to determine if it’s manufactured the same way Topps’s chrome cards are. Probably easier to just search for printing plates.

The Buster Posey shows the front of the Topps Stickers. It’s actually a nice design although all that lightning would have rubbed people the wrong way if it were in Flagship. Buster’s not going into my Giants album though because of who’s on the back. 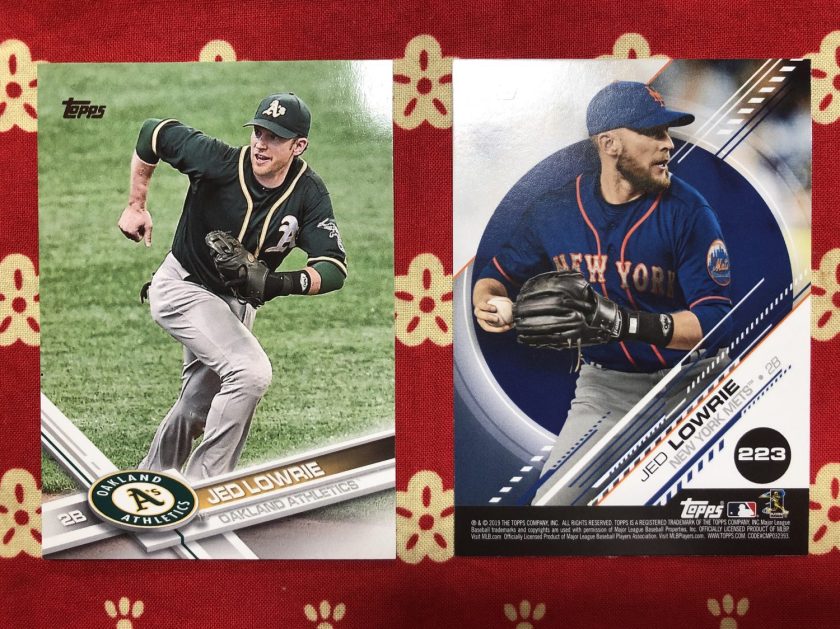 The back of the Posey sticker is Jed Lowrie’s only 2019 Topps card.* Lowrie’s been out injured all season and I don’t expect him to show up in Update so it’s very cool to have this i the album to mark his 2019 season.

The 2017 Lowrie is also nice to have since I think mine’s bundled with a complete set still.

Three 2019 Stephen Piscotty cards round out the batch of new cards. I’ve already covered Ginter and Stickers (There’s a Tampa Bay Ray on the back of this sticker) but I haven’t mentioned Stadium Club yet. I was skeptical of this design when I saw the preview images online. Font is a disaster (except for the Pirates) and the drop shadows were huge.

In hand it’s not nearly as bad. I still don’t like it as much as 2017 but I appreciate that the ground fog is kept to a minimum. Oh, and this is a red parallel which is pretty cool. 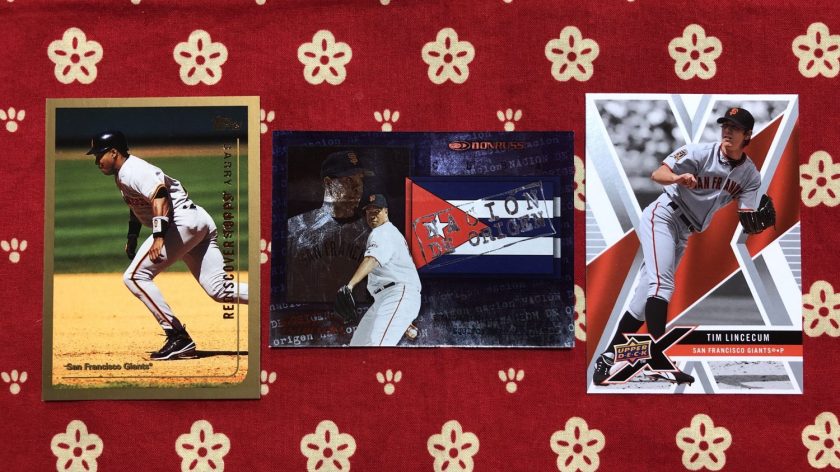 Okay, to the rest of the cards starting with the rest of the Giants cards. Three from the 2000s. The Bonds is a buyback with REDISCOVER TOPPS stamped right on top of his name so that it looks like this is actually a “Barry sddoʇ ɹǝʌoɔsıpǝɹ” card. The Lincecum is from Upper Deck X—a set which I still don’t uinderstand.

The Liván Hernandez card though is wonderful. It’s an insert from 2002 Donruss Estrellas and is a fantastic addition to my Spanish-language collection. I wish I’d known about this earlier and am wondering now where Marc found it.

A handful of 2010s Giants including a 2012 sticker to demonstrate the change in size, a bunch of Triple Play including the disastrous 2013 drawings that look nothing like anybody, and a couple Buster Posey Archives cards in the 1990 design.

The Posey Archives card is extremely interesting to me because Topps was unable to print the borders in the oversize halftone screen they used in 1990 and instead faked it with a stochastic screen. One of these days I’ll do high-definition scans of these cards and write an esoteric post for SABR about this.

Three 2017 cards including a couple more Honus Bonus cards. I appreciate with those guys were trying to do with the game tie-in but the cards themselves are tough to look at. Something about the selective desaturation makes me feel like me eyes are going bad. 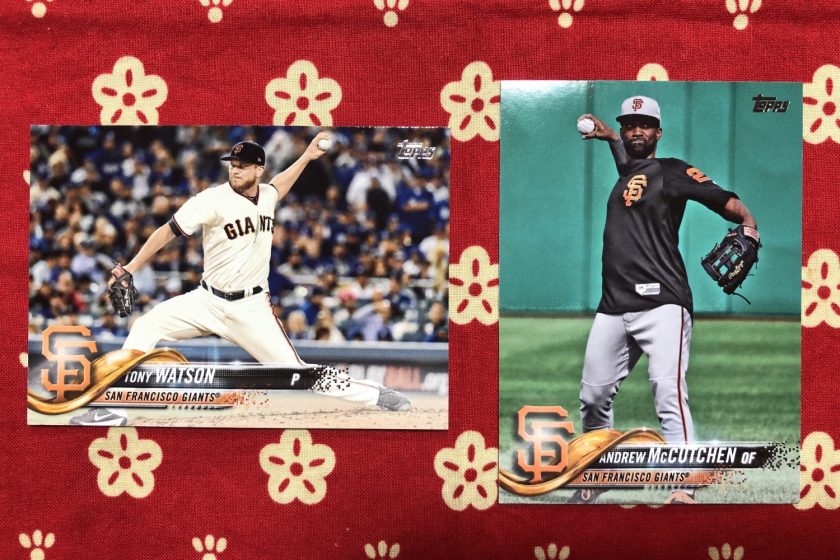 And finally a couple 2018 Giants cards. Watson’s been featured on this blog before. The McCutchen though is one of the SP image variants so those are always nice to see turn up. 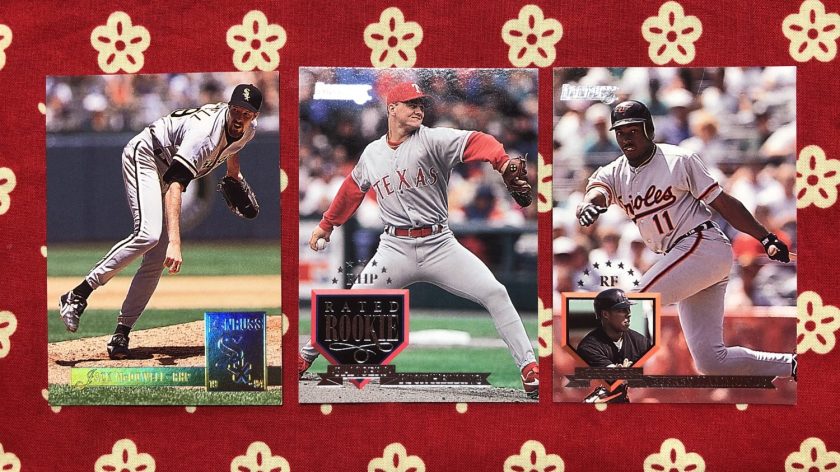 I already covered most of the Stanford cards but these three were also in the stack. the 1994 JackMcDowell is one that not only do I not own it, I didn’t even know about it. Very cool since I actually bought packs of 1994 Donruss as a kid.

The 1995 Helling and Hammonds are nice to have as well. This is a set from the first year I didn’t collect and while I’m focusing on Topps Flagship (and related) for the Stanford project it’s always nice top flesh out with examples from other makers.

To the random portion of the stack starting off with a pair of 2003 Donruss Estrellas and another addition to my Spanish-language album. I’ve been double-dipping and using my Giants and Stanford collections as a way to target what cards to get. This is a good way to stay disciplined but leaves the album a bit light on examples form these sets since the Giants and Stanford ones go someplace else. All of which means it’s nice to have some generic examples.

I’m not an A’s fan but I remember Mulder and Hudson both being great in the early 2000s. Hudson of course is also a future Giant who picked up a World Series ring in 2014.

A handful of Triple Play stickers for the kids. Not much to say about these except to note that Marc must’ve gotten a few packs of Triple Play in repacks. The kids should like these though. 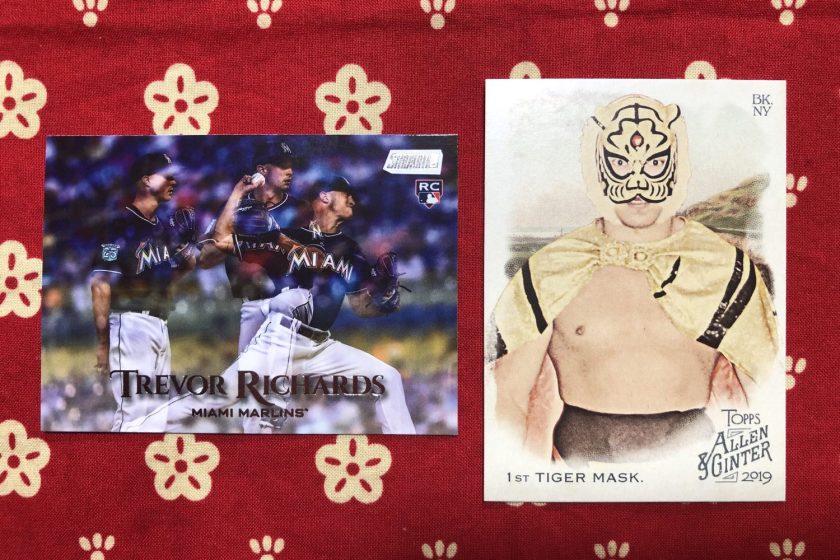 And the last two cards are this random pair from 2019. The Trevor Richards is for the multi-exposure action collection. Is interesting to me that instead of showing all action that it shows him getting the signs, coming set, and then delivering the pitch.

The Tiger Mask card shows exactly what I like about Ginter, the non-baseball stuff. At their best the non-baseball stuff is wonderful and weird peppered with odd bits of culture. They’ve been getting less-weird recently but this is a good one. More of this please (and an Emperor Norton card too).

Now that we’re in non-baseball we can finish off the stack with this pair of Barcelona cards. This is a collectable card game and the cards have a nice bit of spot varnish effects going on that doesn’t show up in the photo. Fun to have a Jordi Alba who’s been a mainstay for Barça and Spain for a while now. Malcolm meanwhile just left to not much fanfare and, while not bad, didn’t stand out much either.

Whew. That was a bigger stack than I realized. Thanks Marc!