My youngest has caught the baseball bug pretty bad. After taking my eldest to his first game last summer, we’ve had a pretty baseball-heavy start to this season and it became apparent that I’d have to take him to his first Major League game this summer.

We thought briefly about all going up together but it felt right for him to be able to experience it on his own without his big brother being the “expert.” So last week we took the train up the peninsula for a game against the Nationals. 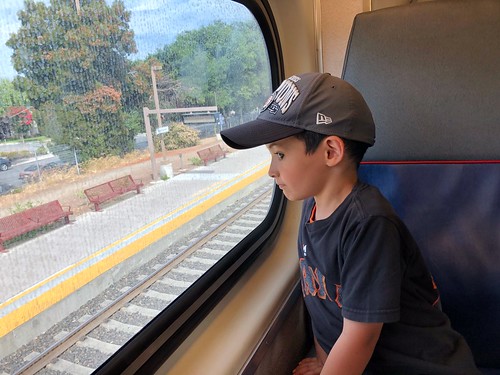 He was excited verging on nervous. He’s familiar enough with trains that he knows they don’t always run on time. This is mostly New Jersey Transit’s fault but Caltrain hasn’t helped either. We got sit on the top floor of the train and it wasn’t too crowded—mostly other Giants fans—since we’d left before the commute started in earnest. Once we were moving he calmed down a little.

I always enjoy taking the train though since it allows me to actually spend time talking with him. He was excited to realize that he was going to be one of the few people in the park who’d been to the original Polo Grounds location and I duly pointed out where Candlestick had been and where we used to park when I was going to games decades ago. Then as we pulled into Fourth and King I pointed out how he could se the stadium lights from the train. 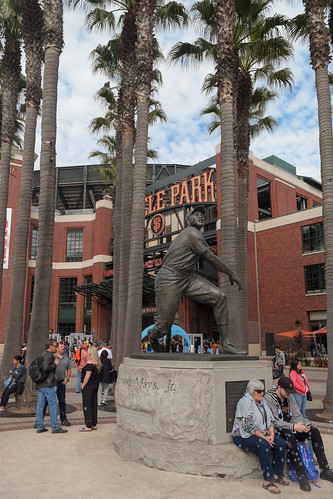 He literally skipped all the way from the station to the ballpark.

I asked him if I was walking too fast and he just said “no I’m just excited” and kept on skipping. Loved seeing Willie Mays. Giant eyes as we went through security and got my phone scanned.* And a face that rivaled his excitement at seeing Winnie the Pooh when he saw the World Series trophies. We picked up his “My First Game” certificate** and a program and scorecard*** and then he finally got to see the field.

*Rant about how physical tickets no longer exist goes here.

**Very cool. Not sure how I missed these last year.

***Good lord the $1 Giants scorecard is an afterthought to an afterthought. It’s the same piece of paper that’s stapled into the programs and doesn’t even pretend to be a functional souvenir. 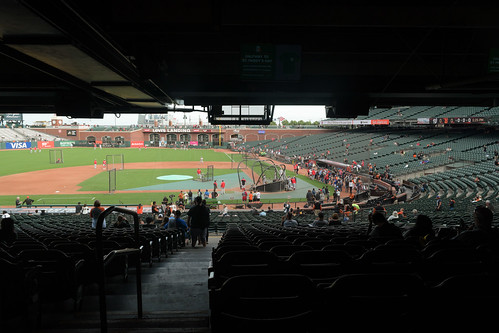 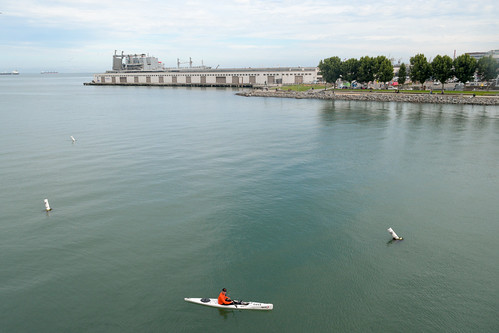 He was excited to see that batting practice was going on. The next time we go to a game I suspect that we’ll just find out seats and watch BP but this time it was time to make a circuit of the park before things got too crowded.

So he went down the Coke slide (it was much faster than he expected). Checked out the bobbleheads (I had to lift him up to see the top row). And wandered along the arcade by McCovey Cove where I got to point out the Willie McCovey statue across the water.

It’s great to see the park from multiple angles and get a sense of the field—especially walking along that right field wall which starts off so far away and gets so much closer as you reach the foul line. 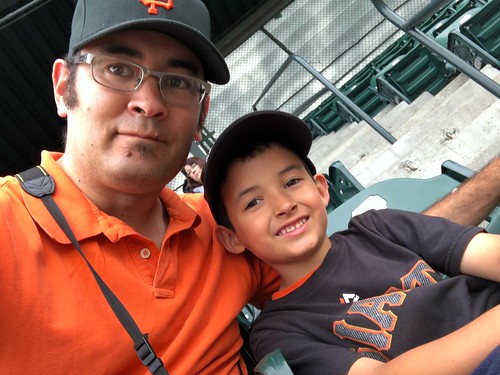 Then we found our seats so we could eat dinner and be ready for starting lineups. I figure that he’ll want a scorecard from this game in the future even though there was too much to keep track of for him to keep score himself.

We were up high in almost the same set of seats I took his brother to last year. Same row just the other end. My favorite place to sit in the ballpark. Up high where you can only be at a Major League game and, in this day and age of defensive shifting, a great perspective on how defenses are being set up. 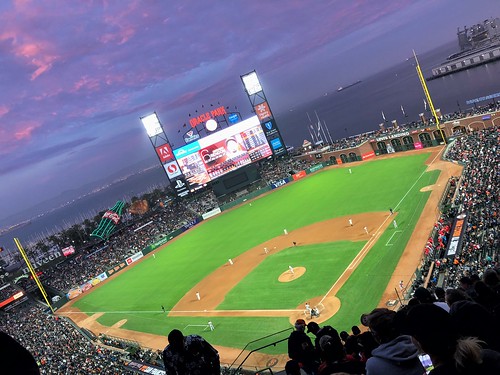 It sucks that he didn’t get to see the Giants even score a run but I was pleased that he still got excited with each hit even though he was increasingly pessimistic that they’d be able to pick up another. 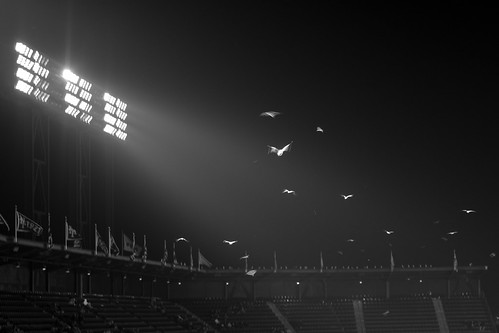 It was nice just to be up there and enjoy being with him as things went on and hope slipped away. We watched the seagulls come in and the Coke bottle get “brighter.” The stadium was only 75% full so we didn’t feel like we had to run* to the train afterward.

He was down about the game but not upset or grumpy. We talked about it being bad but also remembered the cool things we’d seen. He read the program until he fell asleep on the train ride home and the following day took great pleasure in re-enacting Pillar’s catch for his grandparents and showing the video clip to anyone who’d watch. Even a bad game can have memorable moments and I’ve got a photo of Pillar that I need to make into a card for him after the season is over and I finish my custom cards.

Next time we go to a game it will be all of us together. Maybe it will be at Oracle. Maybe it’ll be at the Coliseum. Or perhaps Citizens Bank, Citi, or Yankee Stadium. Lots of options open to us now that his Giants fandom has been cemented and he’s had that proper first MLB game experience in the correct park.