Jason went to The National and was nice enough to ask me if there was anything I wanted him to keep an eye out for. Between my budget and my increasingly-specific searchlists I find it more and more difficult to have people search for specific things now.

My Stanford project is down to only a couple dozen specific cards I’m looking for and those are spread out in year from 1955 to 2019 and cover a dozen different names. My Giants project meanwhile has coalesced around stars and high numbers for pre-1973 cards—not exactly the cheapest cards–and has random holes for everything 1994 to the present.

Neither of these as as simple as set building where you can just submit a list of numbers. However on the one set I’d’ve considered asking him to look for I’m down to eight cards—all Hall of Famers and big-name rookies. Meanwhile the rest of the sets I’m building are modern cards which I shouldn’t be buying any of.

So I declined and thanked Jason for the offer. But he said he’d keep an eye out for pre-70s Giants anyway. Then on National Baseball Card Day, after I returned from hitting two card shops with my kids* there was a bubble mailer waiting for me.

*Not enough for a post but we visited my childhood LCS South Bay Sportscards, got a blaster of Stadium Club to share, said hi to Ben/Cardboard Icons, then visited Steven’s Creek Sportscards and picked up a blaster of Big League. We each ended up with three packs of National Baseball Card Day cards and are, as a family, two cards short of a complete set. I love being able to spend a couple hours with the kids at a card shop and it’s great fun to watch the rip party afterwards too.

I was not prepared for what I found inside. Jason, as my committee co-chair likes to send me packages which reference previous posts on the blog. This 1933 Goudey** Lefty O’Doul is a direct reference to his most-recent post about players who appeared in the same set* as both Dodgers and Giants.

*Where “set” includes traded/update sets as part of the main set.

**Full disclosure, as a font/design/typesetting guy I frequently write Goudey as Goudy.

As cool as that is though what’s fantastic about this card is that it’s now the oldest Giants card* and 3rd-oldest baseball card** in my collection. Pushing back that oldest-card distinction is always a noteworthy event and I’m happy it’s a player like Lefty O’Doul who’s important for many different reasons.

**The only older baaseball cards I have are a pair of 1917 Zeenuts so this O’Doul is also my oldest Major League card.

Yes he’s a New York Giant here. But he’s also a Bay Area sports legend who spent decades with the Seals and, besides Joe DiMaggio, is really the only Seal player people might be able to name. I’d love to acquire a Zeenut of him from when he was with the Seals and one of the jerseys I covet from Ebbets Field Flannels has his number on the back.

O’Doul is also noteworthy for his contributions to baseball in Japan and his legacy can still be seen there in the Yomiuri Giants team name. I haven’t gone deep into the Japanese card rabbit hole but I have a few—all of which are Giants. As a San Francisco fan I have to admit that the Yomiuri uniforms and colors appeal to me a lot even though I feel like picking them as my NPB team is too obvious.*

*I haven’t picked an NPB team. Not that I have to. But the Giants have an obvious appeal. As does any team based out of Fukuoka (Nishitetsu or Softbank) for family history reasons. 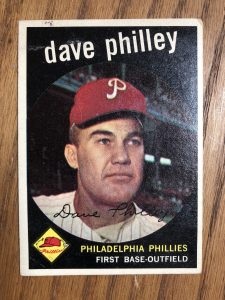 Anyway the O’Doul would have been more than enough to make this a great mailing but there were a couple other cards in the envelope. This one is not a post. Yet. But it should be since we’ve had plenty of discussions about players whose names match their teams. A card of Dave Philley with the Phillies? How fun is that.

It’s also nice to get a black background card from the 1959 set. There’s only one of these in the Giants team set (Billy Muffett) and it’s a bit of a shame since it’s a nice change of pace from all the other colors while still being easy to print.

Two inserts from the 1960s with a 1968 game card and a 1969 deckle edge which are both callbacks to the blog and represent some of the fun, more affordable cards of the 1960s. I love that both of these are mini-sized as well. Modern Heritage remakes of these have been full-size and there’s something about the small size which makes these even more enjoyable.

And the last card of the package is this 1988 Topps Big Candy Maldonado. This card calls back to my post about how Topps has handled Latino double last names. I love the 1988 Big design and its 1980s updating of the classic 1956 design.

The fronts look great—I don’t even mind that there’s no team name or position. And the backs are a nice update of the 1956 backs, updating the name to be the full name, adding full-color printing, all while keeping the cartoon focus and single line of stats. The only problem is that where the spot-color usage on the 1956 backs made the occasional all-same-skin-tone not stand out, on the 1988 backs the cartoons stand out as treating everyone as being white. Not a good look to my eyes.