We got back from summer vacation in time to catch one last Trenton Thunder game. Feels like ages ago since we were going to games in the Spring. Not just the two-month gap, we’ve moved and everything is different (in a good way) in our lives now.

Trenton’s changed a lot too. Half the team we remember has been promoted and since we hadn’t paid too much attention to the Yankees Minor League transactions over the summer we had a lot of catching up to do. The boys enjoyed it though in an everything-positive way. They were excited for all the guys who made it to AAA and they were happy to see some of their favorites who were still around.

They were especially excited to find that one of the players whose autograph they’d gotten in Spring had since appeared in the Majors. Adonis Rosa got just a cup of coffee pitching the final two innings of one game but still, very cool. Now they get to decide if that‘s enough to move him from their Minor League section to their Major League section of their autograph binders.

We didn’t plan on doing any autograph hunting at the game. Last one of  the season and just relaxing at the stadium sounded fun. But there was a table set up behind the press box and the line wasn’t too bad so the boys decided they’d take their chances. 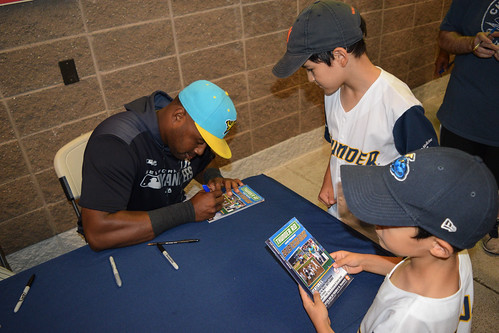 It turned out that two players would be signing. The first was Chris Gittens whose autograph we’ve gotten before. He’s super nice though and it was a great chance to congratulate him on winnig the Eastern League MVP Award. He’s one of the boys’ favorites too so they were excited to see him as well. I suspect they’re hoping that he’s promoted next year though. 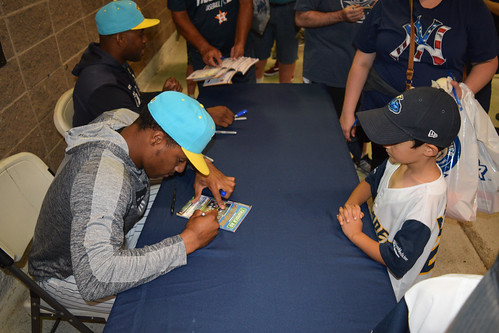 The other player was Isiah Gilliam who’s been at Trenton since July but is new to all of us. He also seems like a nice guy. Since he started at Tampa this season there’s a decent chance we’ll seem him next year.

The boys each got their program signed and I got my ticket stub signed as a memento. They then proceeded to keep score for the entire game—a decent game but ultimately disappointing 3–2 loss. It’s been a lot of fun to see them grow so much this year.

My youngest used to struggle keeping score and paying close attention longer than 90 minutes. He made it the full two and a half hours this time.

My eldest meanwhile is increasingly noticing stuff that I’m not. This is great since one of the best things about going to a game with other people is that we all key into different things that are going on. 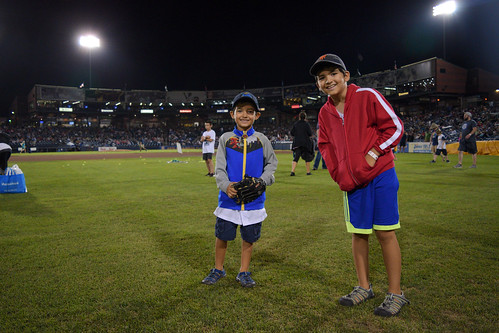 After the game we got to go down on the field for the final Kids Club activity. This was the last Fireworks night of the season and the kids club got to watch it from the outfield. It’s always a treat to be out on the field and this would be the closest they’d been to fireworks ever. 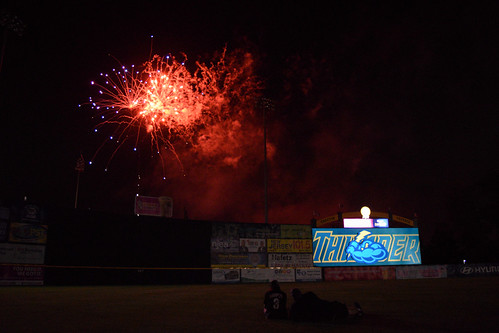 It’s a decent show. Nothing fancy like what Princeton does or crazy like Redentore in Venice. But a very nice way to close out the season and celebrate the ending of summer. 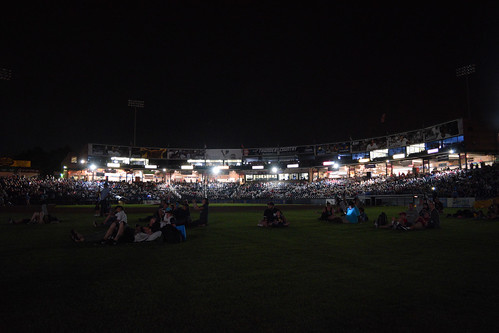 For my part I’ve found that I like turning around and watching people watch the fireworks. Something about the field all dark but the crowd still lit up is sort of magical to me and I like seeing faces get illuminated by different flashes of color (and accompanied by various oooohs and ahhhhs).

School starts this week but the boys are already making plans for next year. The 2020 schedule is in the program and they’ve not only circled all the Sunday day games but have noticed that one of them is Richmond. The boys may be Thunder fans but they‘re Giants fans first and will rooting for the Flying Squirrels that day. I suspect we’ll be trying for autographs as well.

3 thoughts on “End of the season”