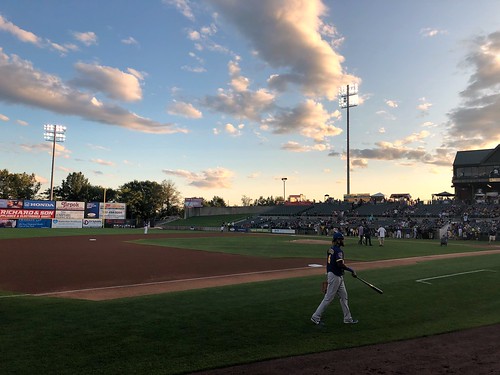 When I wrote about wrapping up our season, while it was about Trenton, I was in the mindset that it was also our last baseball game of the year. As we drove back from the ballpark we were talking about how many games we’d gone to and had all reached the conclusion that that was it.

Then last weekend I caught notice that Somerset was playing a Saturday night game with a super hero theme so the boys and I decided to head out for one last game. I’d been to Somerset earlier this season but this would be the boys’ first time. It’s always nice to add a new ballpark to your life list. 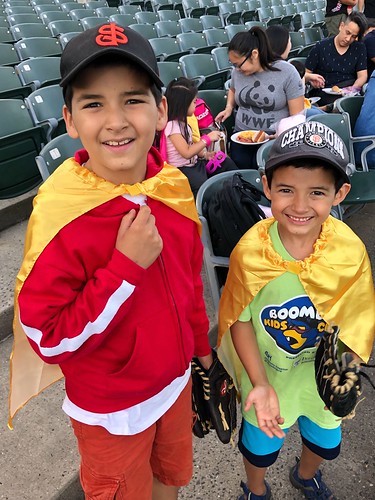 We ate before we left and still managed to get the the park in time for the boys to get their capes. There were enough kids wearing them at the ballpark that even the older kids were okay dressing up. Also there were all kinds of costumed heroes walking around and many of the fans were dressed up too.

My youngest ate it up. He loves Batman so he loved the Batman-themed jerseys and all the other stuff going on. We just wish that the baseball caps had batears like the batcowl. 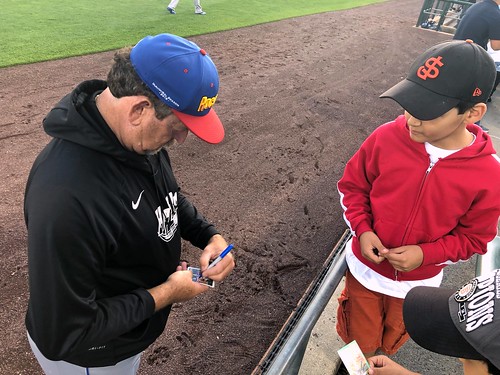 The highlight though was getting Frank Viola’s autograph before the game. My eldest received a complete (well near complete) set of 1991 Topps for Christmas and when we were getting ready for the Thunder season I noticed that Frank Viola was the Binghamton pitching coach. It was at this moment that the idea of getting his 1991 cards signed occurred to him. And it was this moment which also encouraged me to look up the other coaches and figure out who had played in the pros.

So while Joe Oliver was the first autograph of the set (and my son added Brian Harper later), he was disappointed to find that Viola had switched from Binghamton to coach for the High Point Rockers. That High Point was in town for this game meant that we were able to wrap up the season getting autographs on the two cards that were part of the excitement in the beginning. Very cool. 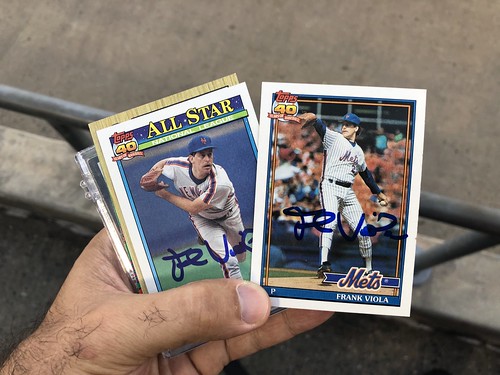 This takes my son to four in-person autographs on his 1991 Topps set. Is he getting the complete set signed? LOL of course not. But it’s going to be fun to see how many he can add to it. Princeton baseball coach Scott Bradley has a card in the set (a fact I only realized after the season ended).  And Pete Incaviglia manages Sugarland which comes to Somerset a couple times a year*

*Actually this week but only on school nights so no dice.

1991 also just looks pretty good signed. Nice photos and simple borders. I like that the two Viola cards look so different too. 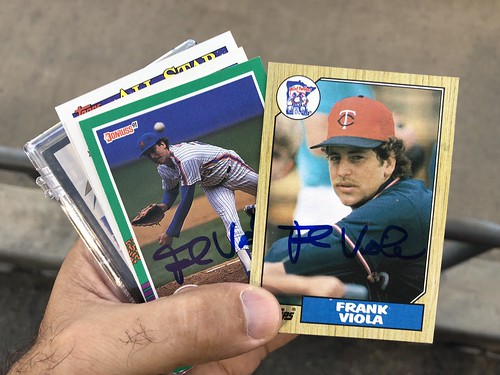 In order to stave off sibling rivalries for now, I’ve been supplying my youngest with cards so he can “me too” with his brother. In this case where his brother is getting 1991 Topps signed, he’s getting 1991 Donruss. I know I know. Those are just the duplicates I have handy.

Still there is something to 1991’s color which appeals to his sensibilities though. In many ways it’s a perfect set for him. And the 1987 is because I happen to have a ton of those as well. But it’s a good year for Viola too. 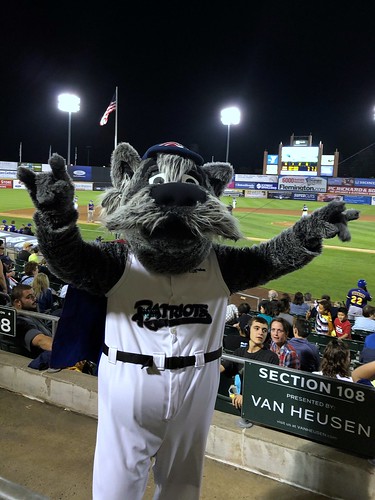 Viola is a super nice guy. Chatted briefly with the kids and thanked them for having his cards. They were super happy as we settled into our seats and watched the game. It was fun for the boys to watch without a rooting interest. Somerset is nominally our home team but they kind of rooted for High Point because of Viola.

We just watched the game. Saw a couple guys steal first base and chatted about how the Atlantic League rules are different.* My eldest has started to recognize when balls are well hit too. For a long time they couldn’t tell if something was hit well or not but a couple of the homers in this game were crushed and he could tell how those looked and sounded different.

He also noticed that many of the players had Major League experience and even recognized a few names from his collection. I suspect we’ll be going to more Somerset games next year and be keeping more up-to-date on the roster. The more low-key autograph scene here suits my preferences and my kids’ comfort a lot more.

High Point jumped out to an early 4-run lead. Somerset scratched back to within one. Then the Somerset pitcher ran out of gas, loaded the bases, and the relievers proceeded to let a couple runs in, re-load the bases and serve up a grand slam. Still, we saw some nice defense in there as well and there were plenty of other Independent League shenanigans as well. 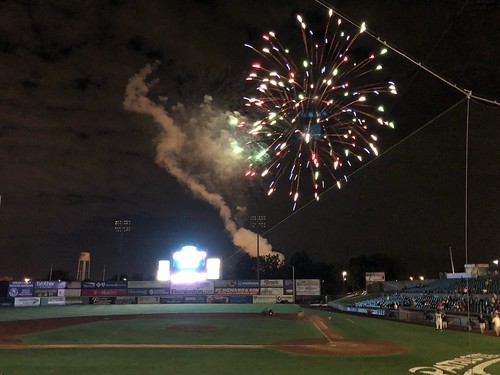 Mascots and superheroes roaming the aisles. Batman clips on the Jumbotron. Tshirt tosses (my eldest grabbed one). Playing “Piano Man” when it hit 9:00.* And yes fireworks after it all ended and Somerset was put out of its misery.

*No tonic and gin for sale though.

The show had been hyped as a good one and it was one of the better stadium shows I’ve seen. An NJ Transit train pulled in right during the finale and I found myself wondering how much the train riders could see since it looked like things were being fired off right nest to the tracks.

There’s another series in a couple weeks. I don’t expect us to go but I can see them lobbying for it…