Another day, another package. The day after I got Tim’s box I received one from Marc Brubaker. He’d tipped me off that something was coming but I was surprised to see that it was not just a bubble mailer.

Instead it was a box and when I opened it up I started laughing. A couple weeks ago Marc had asked me for snack recommendations since he was going to an Asian supermarket. Since he knew of the obvious stuff I mentioned things that I’ve had problems finding even at most Asian markets. One such item was Boy Bawang which is like Corn Nuts only both easier to chew and super garlicky.

Marc was lucky enough to find a selection at his store and only realized too late that these are not only “eat the whole damn bag” good but are “well shit I’ve got another bag right here” good as well. I’m looking forward to popping this open.

The rest of the package was mostly cards, mostly of the grab bag variety. I’ll start off with the Stanford guys since I sort of screwed up my sorting and paged them all before realizing that I hadn’t documented anything for this post. So I went thought my binder and pulled out what I remember was new. Marc sent more than this but I don’t remember the duplicates.

Adding a bunch of new Ballards is great. I especially like the 1990 Mini Leader. The cards of Adams and Castro in their Stanford uniforms are also a lot of fun. A bunch of new Buecheles are also fun. I have a lot of the 80s guys pretty well covered so it’s always an expected treat to find cards of them which I don’t have.

The Lowrie Heritage is a weird photo. The two McDowells are lucky fits. I had the base 1993 but not the Gold and I had the gold and Spanish 1994s but not the base. The Two Mussinas are cool. It’s always fin to add an oddball and 1994 Triple Play must have come out after I stopped collecting. That’s a weird design with what looks like 3D lettering but which knocks out to the photo behind.

Five new Piscottys too. The two Chome 2019s are kind of wild. I really can’t see refractors so I’m glad this is labeled as such. The other is even wilder and while it works with the 2019 design is definitely in the category of card I’m happy to have only one sample of.

The Archives in the 1975 design meanwhile is one which I’m tempted to nitpick on how they didn’t correctly copy the original design but since it says “Athletics” instead of “A’s” I consider this an improvement over the original. It is interesting to me however how the facsimile signatures feel super fat now. I’m not sure if this is to look more Sharpie-like or if it’s just how Topps is capturing players’ signatures now.

A bunch of action cards for the mini-PC. Sportflics are always appreciated. As are the multi-image Upper Deck cards. Any duplicates of these will go to the kids and they’ll be just as impressed with them now as I was 30 years ago. I like that Marc even included a Fire insert which shows Kluber’s pitching motion.

The highlight here however is a Brett Butler Flip Tip. Comparing a drag bunt to a sacrifice is super subtle but these are a cute little product. I’ve no idea how I’ll store this (the main reason why I haven’t sought one out) and I’m a bit worried that I’ll love it to death. The GIFs though are pretty cool and look almost faked.

Three 1991 Donruss set needs take me one step closer to finishing this set. I could of course kill it now on Sportlots but I refuse to spend money on this build. 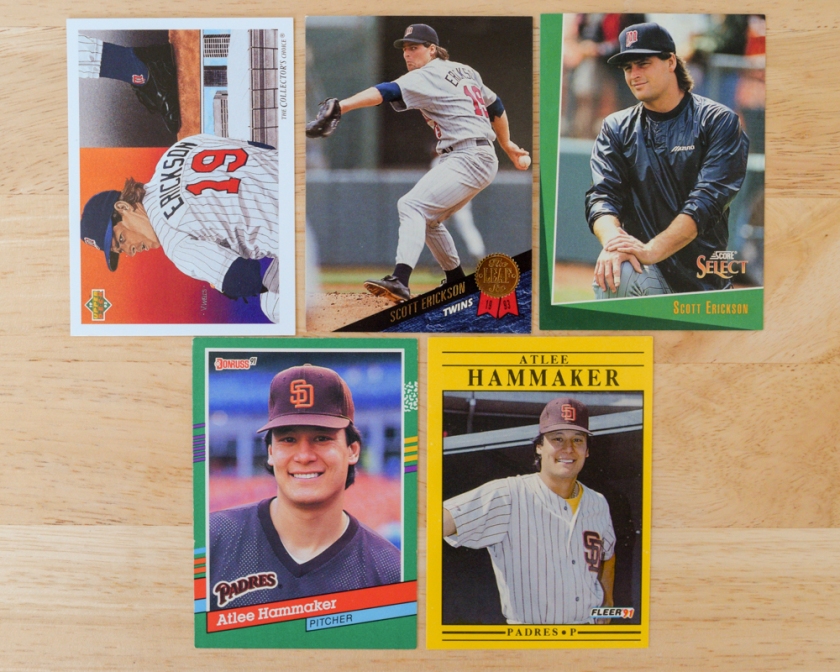 A handful of PC guys. I don’t actively collect non-Giant Hammaker cards but they’re nice to have. Erickson meanwhile is one where every card is welcome.

Three cards for the yet-to-be-started Hawaii collection. The Sakata Senior League card is all kinds of awesome. I refused to touch these when I was a kid but I can see why people love them now.

Three Conlon Collection cards featuring extinct teams. It’s nice that each of these features a good image of the uniforms too. 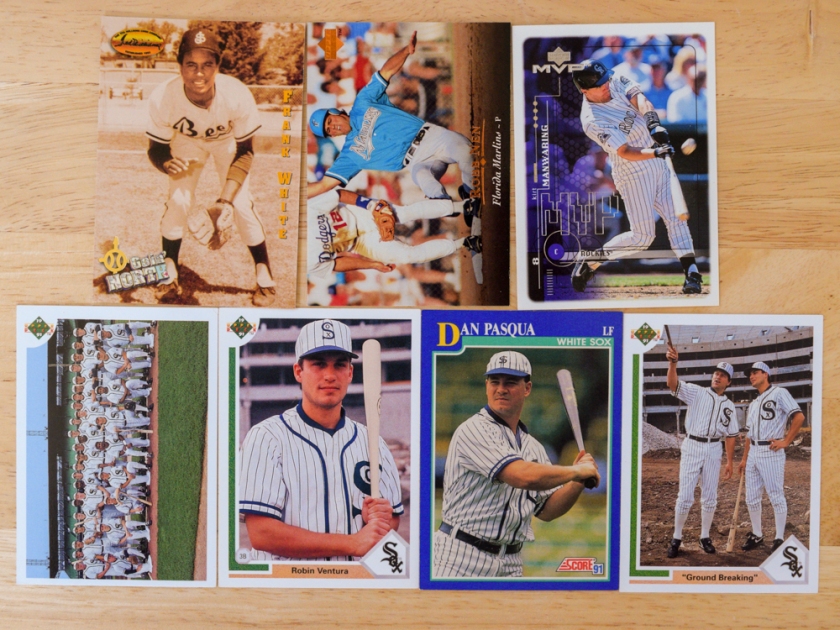 Moving toward the bottom of the grab bag. Two action shots of guys I like as Giants. Manwaring has one of the best runs of photography for any player at any time period in the game. His career was fine but if I didn’t already have a collection of Giants he’d be a guy I’d PC just because his cards are almost all awesome. Robb Nen as a Marlin running the basepaths though is just a fun card.

Frank White as a Bee is great. I always forget that they used to be a Royals affiliate. Not sure where I’ll put this to be honest. I may have to start an album for local Minor League teams that aren’t affiliated with the Giants and keep Seals, San José and Trenton cards in there.

And finally a bunch of cards commemorating the first turn back the clock day  at Chicago in 1990. I love seeing these uniforms show up on cards and it‘s a great reminder of when this kind of thing was special and unique. Now with “throwback” variations in the card sets they just feel like cardboard gimmickry.

And to the last random bunch of cards where Marc’s going to have to jump in the comments to explain things. I’ve no idea on Salazar. Langston is a San José State guy plus the UK minis are always fun.

Not sure about Kikuchi but this gives me a chance to point out how Heritage High Numbers seem to feature a lot of players in sunset (actually sunrise but it reads as sunset to all of us who don’t get up at the crack of dawn) while regular Heritage is mostly blue skies. This is more common on some teams like the Giants where the blue vs golden sky is something my kids caught. The Mariners high numbers meanwhile have a super-dark sky that looks like what Topps was trying to do in the 1985 and 1986 sets with so many of their portraits.

Greg Harris is an ambidextrous pitcher. He only pitched once with his left hand but each card here depicts him from each side of the mound.

On to the Giants portion of the mailday. This is a lot of junk wax so I won’t have too much to say on many of the photos. I have not see the Fleer stickers before. And the Score inserts? Those are mostly new to me too.

The starting lineup is a lot of fun though especially because Marc included the figurine.

It looks nothing like Will Clark but I very much liked these as a kid. My first one was a Candy Maldonado I got as a stadium giveaway. I Sharpied Candy’s bat black since Candy didn’t swing a natural-colored bat. I also had this Clark so now each boy has their own Will Clark Starting Lineup figure.

Most of this junk is going to the kiddos. Though it’s not often you see a Grandslammer in the wild so that’s kind of special. Much to my surprise they like 1990 Topps and all those colors so I’m glad there’s a bit of it for them.

More duplicates. All these 1991 Topps though will be especially good for my youngest since his older brother already has the set. Also the decent number of Will Clark duplicates here has gotten them very excited since I was able to put together a couple stacks of cards for their albums that each included a number of Clarks.

Mostly more duplicates here. The Bowmans I never snagged as a kid so it’s nice to add those. I was so distracted by Fleer’s yellowness in 1991 that I never noticed that it had switched to all-action that year. 1991 Fleer deserves all the crap it gets since that yellow is pretty bad unless your team features yellow. This is unfortunate though since as a design it’s not actually that bad. It would look fine in foil on black ink. It would look fine in white on a spot color like 1992 Fleer’s metallic green. It would even look fine  (albeit maybe a bit too close to 1990 Fleer) in team colors on a white border. 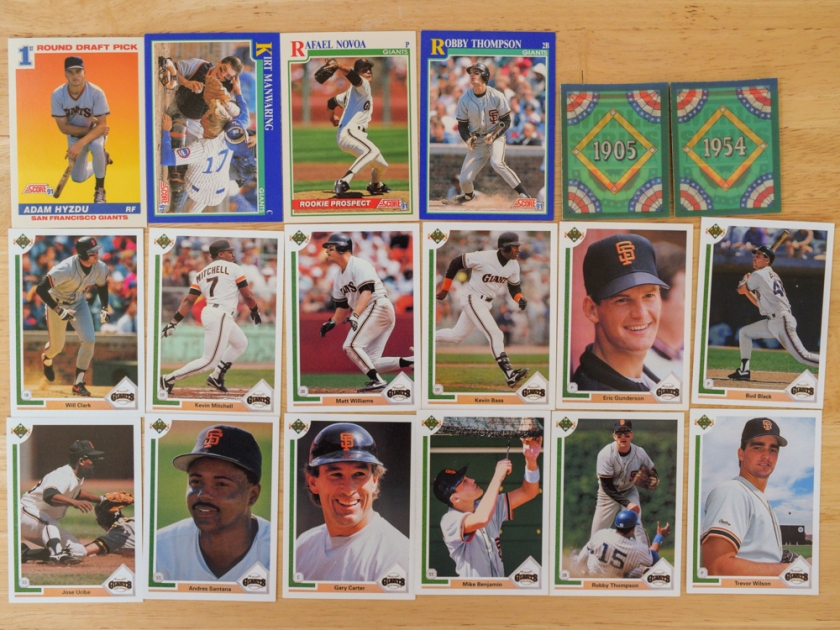 Still more duplicates. 1991 Score‘s design isn’t my favorite but I love the checklist. 1991 Upper Deck though is one of my favorites. There’s something to the mix of action, long-lens candid, and posed portraits that sets these cards apart and in many ways serves as the photo mix I still want to see in cards today.

More 1991s and a handful of minor league cards. It’s always fun to see a few names like Jim McNamara which I remember in the bigs.

Continuing the rich vein of junk for the kids. 1992 Topps is another favorite set of mine. I also like 1992 Fleer despite the green since the spot color happens to work well with all the different team colors in the player name. Yes it’s lots of green but the bold name breaks things up nicely. 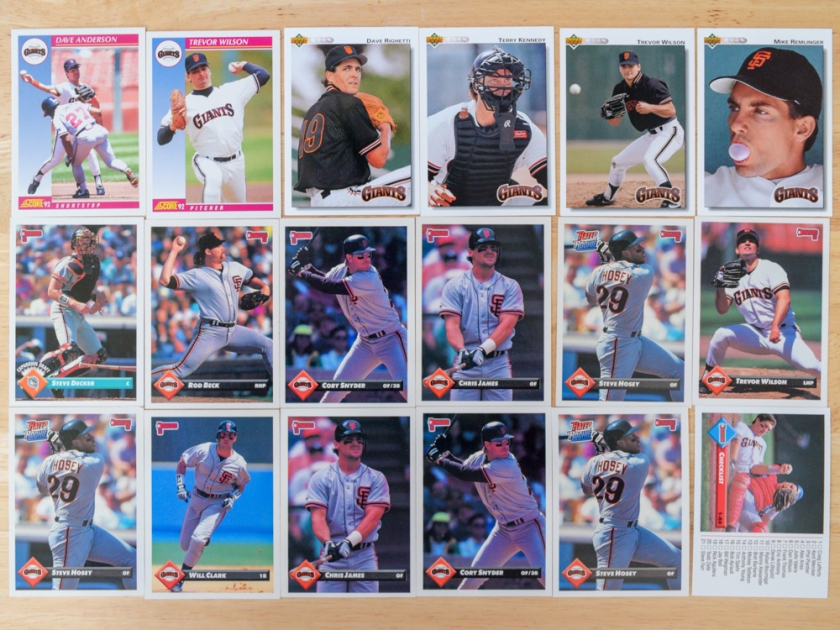 On to 1992 Upper Deck. I’m not a fan of the drop shadow but I’m still liking the photography. 1993 Donruss on the other hand does not move me with the “hey look we have computers and can make beveled edges” design that proceeded to dominate a bunch of sets for the next couple of years..

Moving into 1994 means I starting to get into some of my needs again. Mostly just the minor leaguers though in this batch. Since I already had a duplicate of this Mays I was able to give one to each boy. This always makes them very happy even while they‘re asking me for a “real” Mays card the same way I asked my parents for such a card 30 years ago.

Lastly, a bunch of more-recent needs. Have never seen the new Pinnacle. It both feels right and like a pale imitation of the original. Three Heritage High numbers which show the Giants version of the sunset. Yes that’s actually a sunrise. Pretty sure Pillar is composited in since he has the same background as Pomeranz and was nowhere near Scottsdale when photo day occurred.

Three Archives (plus some duplicates). The 1993s are weirdly over glossy and that bugs me more than Topps getting the font wrong. I do really dig the 1988 effect on the 1958 design however. It allows the photo to be cropped more interestingly. Two Fire cards. I like this year’s design although it’s interesting that my kids prefer last year’s. And some duplicate stickers since Lowrie was on the other side of the last Posey sticker Marc sent.

And last but not least, my first 2019 Bumgarner card. Nice to have one card of him in what we’re all assuming is his last season as a Giant. Sigh. I’m glad the fans got a chance to thank him properly in the game.

Thanks Marc! The boys are already enjoying some of this batch as well.