My third trade package in three days! This post though will be half as long as the other. P-town Tom is a blogger over at tilnextyear-tom.blogspot.com. He’s a Cubs guy but I really love his Hall of Fame binder project.

A couple weeks ago he posted about getting close to the end of a couple junk wax set builds—namely 1991 Studio and 1991 Donruss—and I realized that I had a dozen cards that would help him get closer to that light at the end of the tunnel. So I reached out and he was happy to be able to clear out a bunch of his duplicates to help me as well.

This is trading at its most pure. I send what he needs. He sends what I need. No worrying about matching card-for-card since the value of clearing the cards out of the house is probably more than the value of the cards themselves.

The end result is that Tom’s mailing took five of my sets to within touching distance of completion. Which is very cool. 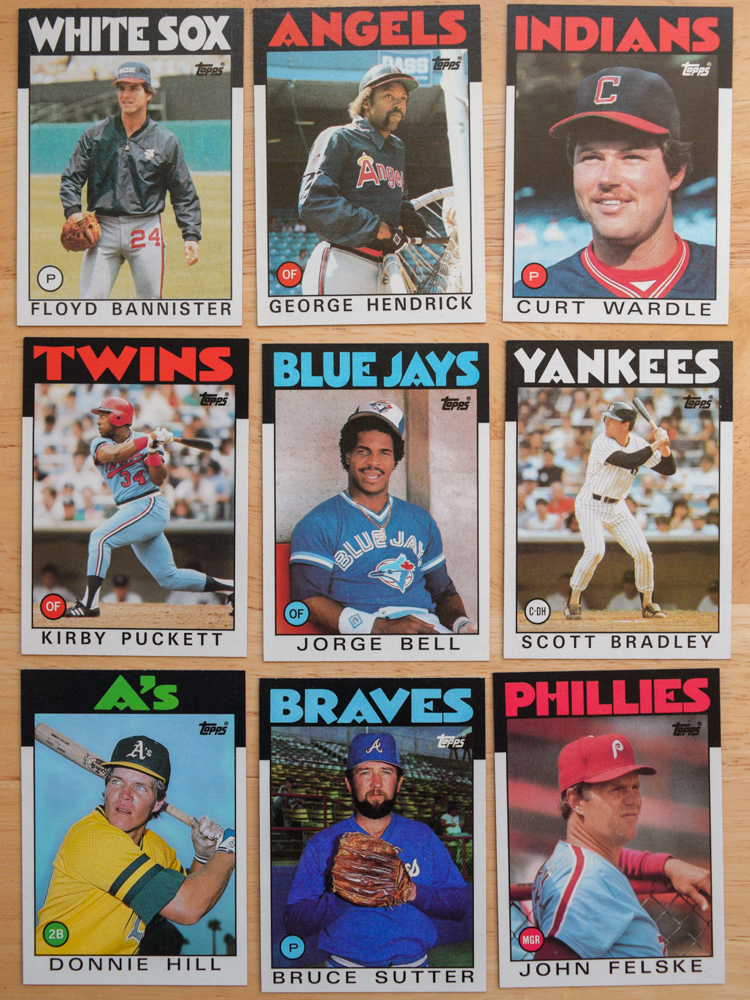 We’ll start off with 1986 Topps. I’ve mentally considered this set finished since another twitterer said she’d set aside cards for me but I also never cross off cards until they’re in the binder. Anyway as someone who both went to his first MLB game and started collecting cards in 1986, this set will always feel nostalgic to me. There are some weird photos but I like the variety and the color and there’s something wonderful to me about the black header border. The Scott Bradley might get pulled next spring since he’s the Princeton baseball coach.

Even though everything is supposedly pending, I’m still treating this as missing 13 cards. Those cards are as follows: 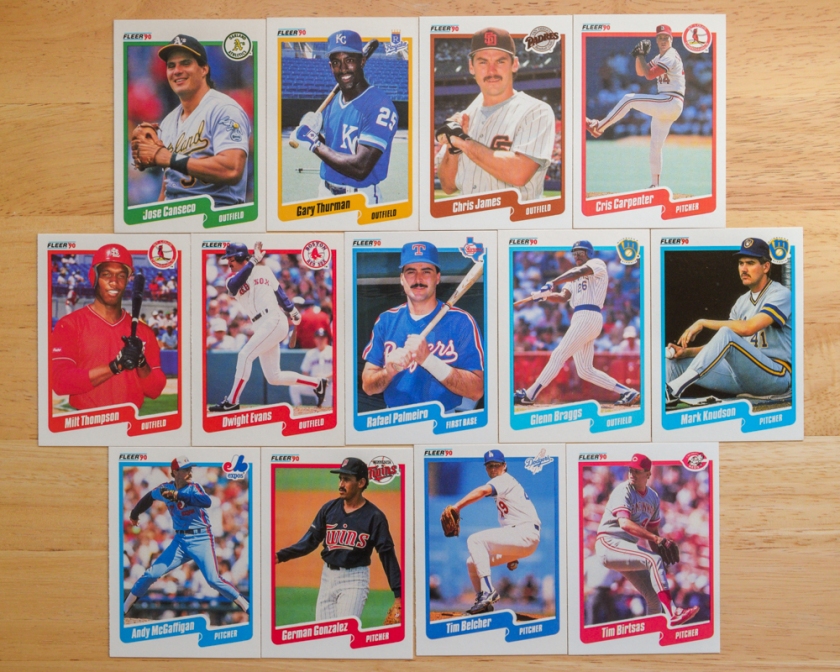 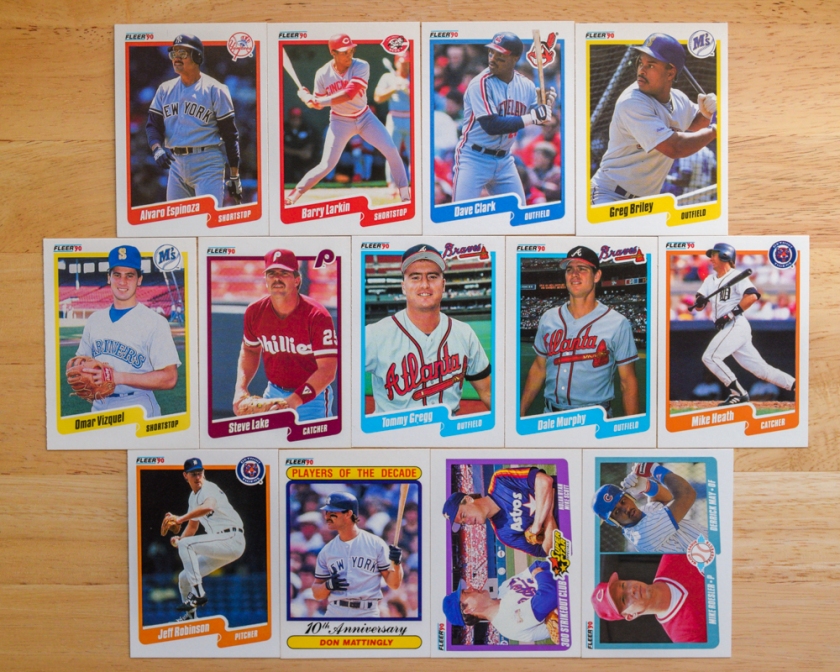 Tom meanwhile killed my 1990 Fleer list and left me missing just one card, number 530 Carlton Fisk. And that one’s been promised by another trader as well so this is another set that’s unofficially complete now.

I need to note here that all the cards Tom sent me are super crisp, probably the flattest, sharpest specimens of these sets I’ve ever seen. I don’t beat my cards up but even out of the pack none of them felt like these do.

1990 is a sneaky design. Kind of boring but also lots of subtle goodness in many of the cards. I like how so many of them break the frame. I love Fleer’s commitment to team colors. And I enjoy how nice this set looks signed. 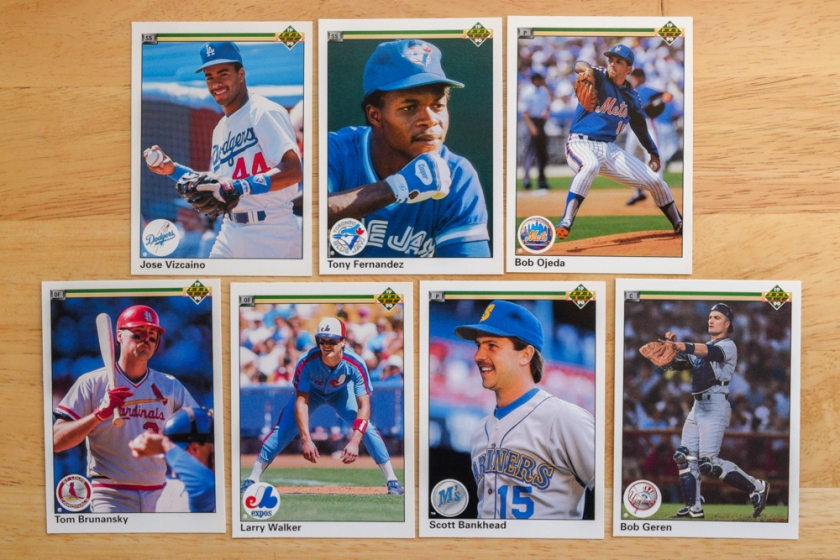 Tom did the least damage to my 1990 Upper Deck build but he still got me to within 30 of the finish line. Yes I’m including the high numbers here. 770/800 is over 96% complete and I’m very pleased with how it’s coming along. Although I’m less pleased with the specific cards I’m missing:

Yeah. I ripped a box and I’m still missing all three Bo Jacksons. I wonder if those were harder to come by.

Fifteen 1991 Donruss cards took me to needing only four more of these. Like 1990 Fleer, this was a set which I’d been gifted a box of when I was a kid and have decided to try and complete now. It’s been fun and has provided me with enough duplicates that my youngest has a handful of these cards signed.

This isn’t a design I love but I appreciate the 1990s-ness of it. It’s also the kind of super color that my kids like so they’ve enjoyed using them for autographs. The four I’m missing are:

Where my “last” 1986 Topps was Eddie Murray, last 1990 Fleer is Carlton Fisk, and last 1978 will be either a Hall of Famer or an important Rookie, my last 1991 Donruss is going to be essentially a random common. That’s both fun and a testament to how worthless all the cards in the set are. 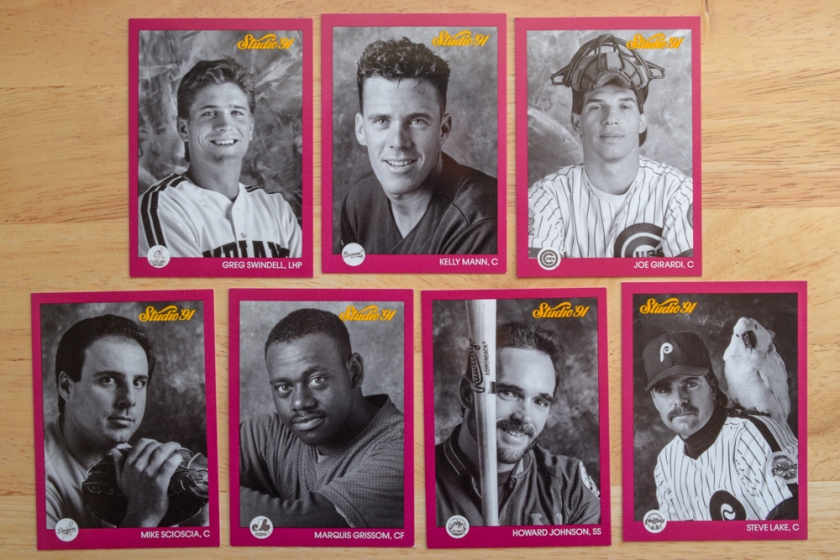 The last of the set build help takes my 1991 Studio to only needing ten left. I love this set and the way the photography changed my understanding of what card photography could be. The Steve Lake is not an image I’ve seen before and is all kinds of awesome.

The ten cards I’m missing include a couple Hall of Famers and a bunch of commons. Will be interesting to see how this set completes itself. No I’m not going to kill it on Sportlots unless maybe it’s Brian Harper I need and he’s still coaching in the Eastern League next year.

The last batch of cards is for my 1990 Score Giants team set. The Dravecky is a card that should’ve been in my binder 30 years ago. Same goes with the World Series card. It’s a nice pair with the Lights Out at Candlestick card from the same set. Somehow I didn’t have this card from the one World Series game I ever attended. Now I do and my binder feels much more complete now.

Thanks Tom! I’m glad I was able to help you with your sets and you definetly helped me with mine.