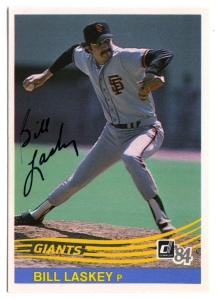 Late last week a small envelope from Tim showed up in my mailbox. Inside was this Bill Laskey autograph that he’d gotten in-person 35 years ago. Laskey had a great 1982 rookie season and followed that up with a couple decent years before being traded to Montreal in 1985. This means he’s not one of the guys I know much about although the fact that he started the Joe Morgan game in 1982 is registered in my brain for some reason.

This is one of those small mailings that means a lot to me because as an autograph collector I know that in-person signatures have more meaning than just the signature. I have plenty of signatures that don’t “fit” my collection but they’re all meaningful to me still since they’re things to pin my memories to.

My foray into 50/50s this past season has meant that I’ve reevaluated my feelings about this a little. The fact that I’m blogging and can point to the whole experience of the hunt means that each individual signature is just part of the memory instead of the main event. For my kids though each card is everything and even though I suspect Tim was around 16 when he got this means it was probably still a big deal at the time.

I totally get the idea of winnowing down the stuff I have and focusing my collection, it’s just that when I do so in-person autographs will be the last to go. So yeah I’m kind of honored that Tim’s entrusted me with a bit of his youth. It’s now in the binder next to Champ Summers and Manny Trillo where it belongs.

One thought on “PWE from Tim”