I’ll start off with the last returns to arrive in 2019. It was a good, fun first year of sending out requests. I sent out 131 requests and received 90 successful returns. My 2019 TTM folder has 173 scans in it so I consider that a resounding success.

A lot of those requests involved custom cards and sending to guys I remember from my youth. I still prefer in-person autographs and the way they’re part of a larger experience, but letter writing and customs creation has been extremely rewarding. I love it when someone keeps the extras or sends a nice note back.

Anyway, to the returns, both of which are stragglers that were out for a quite a while and had been sitting a my parents’ for a couple months.

I sent to Rich Schu while he was the Giants Assistant Hitting Coach. By the time his card came back 183 days later the Giants had completely revamped their coaching staff with three hitting coaches including one called the “Director of Hitting.” I don’t know what’s going on over there now.

Schu is also one of those guys I remember from my youth. He moved to the American League in 1988 but even though I had only been a fan for one of his years in the National League I think of him as a Phillie. Basically, whatever team a guy is with in his 1987 Topps card is likely to be the default team in my mind because that was my first set and the only one I truly studied every single card in.

Mike Kingery took even longer to get back. At 211 days this is now my longest return. I enjoyed writing to Kingery because I remember him coming to my local park as one of the instructors in the Giants Community Clinics.

I was prepared enough to bring a Mike Sadek card but since I had no idea who the players in attendance would be, I never got Kingery’s autograph. Where Sadek covered fielding, Kingery taught hitting. I really wish I could remember who the pitcher was that year (probably 1990).

Moving on to 2020 returns, I don’t expect to send as much out this year but things have already started off nicely. I’m still working through my stack of customs and am enjoying writing those letters.

My first return of the new year was Ron Cey who responded in 8 days. I created a Cey custom for Greg/Night Owl* and liked it so much that I decided to send it off to Cey as well. I included a couple Cey cards to get signed and am happy to have them back.

*His response to the customs I sent him is very nice.

It’s flattering that he kept all three customs. It would look nice signed in silver but all that black in the photo doesn’t lend itself well to any other ink. I do really like his 1978 Topps card* but by the time I was collecting I knew of him as a Cub (or an A) so it was fitting for me to send one of each. It’s clear that Cey thinks of himself as a Dodger first though since he includes his uniform number only when he signs Dodger cards.

*Note, this is actually an O Pee Chee card.

I didn’t send him a custom but as with my Bill Lee request last year, Al Hrabosky is one of those guys who I grew up reading about and am very happy to add to my collection. No Mad Hungarian inscription but still very very cool.

I’ve been getting a lot of these non-Giants autographs on 1978 cards. Part of this is that as I build that set I’ve come into duplicates, but I’ve also come to like the design and its photo-centric nature as one that is enhanced by a signature. Most of the head shots aren’t too tight and the design is so minimal that it doesn’t distract from the signature. 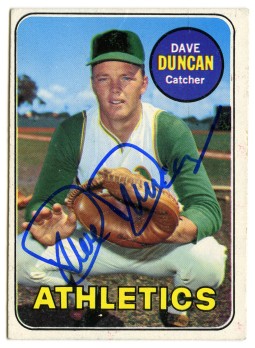 Former A’s pitching coach Dave Duncan came back in 8 days. I was not a fan of the Tony LaRussa A’s when I was a kid. Respected them but I just never liked them as a team. As I got older I realized that most that was about LaRussa, his school of over-management, and the weird chip on his shoulder which would get him upset about all kinds of stupid little things.

Amidst all the Bash Brothers stuff and everything else I was in awe of the A’s starting pitching and the way Dave Stewart and Bob Welch became some of the best pitchers in the game during those years. Dave Duncan played a huge part of that and I’m very happy having his autograph to commemorate those A’s teams of my youth.

This 1969 card is another simple design like 1978 which I’m liking a lot for signatures. Unfortunately 1969 suffers from the player boycott and the resulting images are all old. Duncan’s is from 1967 (or earlier) and so the KC logo on the cap has been blacked out. I’ve been louping various blacked out caps (my childhood 1969 Mota is another) and have found that they’re achieved in different ways. Some are stripped in while others are airbrshed onto the artwork that’s photographed. Duncan’s is in the second category.

Jim Rice was a fun 8-day return. He’s another Hall of Famer to add to that section of my binder. After my first Giants game in 1986 my parents pulled the TV out* for the World Series. As a result, most of the players on both teams are still memorable to me but since we were rooting for the Red Sox I do find myself especially happy to get signatures from guys on that team.

*Long story. TL;DR version is that my family kept our TV in the closet and only pulled it out for special occasions.

I especially love how this card turned out. I looked at my available Rice cards and selected this one because I saw the potential for the photo looking great with a signature. It’s an interesting image—a bit of baseball ma capturing a moment of non-static downtime*—and Rice signed it in the perfect location.

*Previously mentioned on here with regard to a Darren Lewis card and a Hisao Niura card.

Another 1978 card. This time Cy Young Award Winner Ron Guidry whose return took 19 days.  As before, I like the way this design works with signatures but in this case the 1978 card is especially appropriate because Guidry’s 1978 season was awesome. He not only deservedly won the Cy Young award but also came in second to Jim Rice in the MVP voting.

This is a fun one. Last summer my mom and I were talking about the Hawaii Islanders and how she followed baseball when she was a kid.* I pulled up the rosters and we started to go through names. I recognized a decent number of them—e.g. Bo Belinsky, Jack Hiatt, Diego Segui, and Dave Marshall—but for her the name that triggered her memory was Bob Duliba who she referred to as the Dennis Eckersley of the team.

*She wrote a letter to Harry Kalas about this back in 1989 which resulted in us getting tickets to a Giants–Phillies game during our trip to Philadelphia.

Looking at his stats for the 1963 season he spent in Hawaii confirms that he was indeed the Islanders’ relief ace, appearing in 53 games and having one of the best WHIPs on the team. I can see why he would make an impression since that’s a lot of appearances for a pitcher to make and a good reliever is one of those things that fans remember.

When I looked up his cards I saw that they were pretty cheap. I wanted one which had his Hawaii stats on the back but no luck, so instead I grabbed one from 1963—the year he was in Hawaii. I also noticed that he’s a reliable TTM guy so I wrote him a note and mentioned how my mom had told me about listening to him pitch. I did not expect him to write me back.

Notes like this are what Make TTMs so fun. In this case it was nice to see that he enjoyed being reminded of his time in Hawaii but also sent me on a bit of a search to find out about the Hawaii Major League. It comes up as different types of local semi-pro ball over the years but by the 1950s it appears to be a military league.

I ended up searching dvidshub.net for “Duliba.” It spat out a bunch of Windward Marine PDFs including one from April 1957 which details Cpl Bob Duliba’s first league start. Yeah I know his note says 1955 but the back of his card says he was in military service from 1956–1958. That 1957 season appears to have sent the Hawaii Marine team to the finals of the Marine baseball tournament.

Former Giant and current Padres broadcast Mark Grant came back in 14 days. Mark Grant is one of those guys who was part of the first team I really paid attention to. Even though he got traded halfway through the season he’s still someone whose name triggers memories of my first year of truly paying attention to baseball.

The last return to make the publishing deadline for this post is this 19-day Don Demeter return. Demeter is not the kind of guy I’d usually send to since he’s not a player I have any familiarity with. But in this case my hand was forced since I wanted to confirm the hive mind’s conclusion about the Al Kaline mystery player.

Mystery solved! Or well… Assumed solution confirmed! Demeter used the index card to answer my question about whether he was indeed the mystery non-Kaline player. Do I still feel sheepish about the Kaline mistake. A little. But the mistake has also resulted in more-interesting requests and returns and this kind of response makes my autograph album a lot of fun.

A decent start to the year for sure. I haven’t been sending out too many so far so it’s been nice to have a surprise in my mailbox every couple of days.