It feels like years ago but it hasn’t even been two weeks since I made the trek out to Queens to check out a small exhibition that Ralph Carhart had put together at Queens College CUNY. I went partially to support another SABR member in my backyard but I would’ve wanted to see this show anyway since the hstory of baseball in New York is something I should know about.* Plus I hadn’t been out to Queens and have wanted to check out Corona Park** and the Queens Museum for a long time.

*Much to my chagrin I totally blew it and missed a show late last year about New Jersey baseball that was almost literally in my back yard.

Initially this was looking like a possible meetup for a bunch of us on Card Twitter but between work, family, and virus concerns, only Mark Hoyle made it down from Boston. This also saved him a stamp since he was able to hand-deliver me a nice Gypsy Oak print of Marvin Miller before we even got to meet Ralph and start our private tour of the exhibit.

Having just sent Mark a set of my printed out Viewmaster scans I was unable to reciprocate. Still, it’s always great to put a face to a contact. I haven’t met many of my twitter contacts but on the rare times I do I’ve really enjoyed it even though there’s always a lot of apprehension due to meeting someone who you already kind of know even though you only know that small portion of their interests which you overlap with. 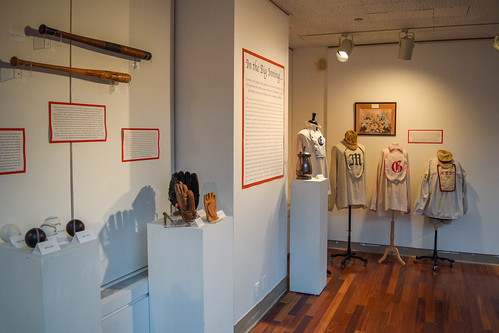 Ralph met us at the Library and opened up the exhibit for our tour. I’m not usually a big talker when I’m at a museum but we spent more time talking about the stuff on display than reading the descriptions that Ralph had worked so hard on (sorry!).

The show is laid out roughky chronoligically which meant we started off with vintage base ball. Which was great. Of course we’d all seen games and had paid enough attention to know some of the rule evolutions. Ralph though pointed out the differences between the New York game and the Boston game and suggested how a similar show in Boston would be very interesting. 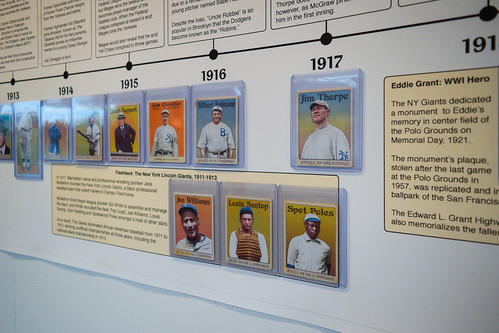 My favorite part of the show was Jesse Loving’s Ars Longa cards which he had used to create and illustrate a timeline of New York (and its environs) baseball up to around 1920. The cards are all customs but the choice of design and the treatment of the photos* really works to make the whoel timeline come to life.

*I’m not usually a fan of colorizing black and white photos but it really works here since so many of the old cards that inspired these customs are paintings based on photo originals.

It’s not just an image of a player that jumps out but the style of the card and way things are depicted that adds so much more richness to just a simple timeline concept. I love a lot of these but my favorite is probably the Arnold Rothstein Pea·Nut custom since Zee·Nuts are one of my favorite things.

As we moved more into the 20th Century, the artifacts became a bit more standard. This isn’t a bad thing as it reflects the game becoming the game we all know and love. One of the best things about baseball is how it’s truly recognizable throughout the decades. Yes there are some equipment changes and things but at a base level the game is unchanged.

There was also a decent amount of art, specifically paintings, on display. They were nice, the Graig Kreindler in particular kind of glows and I certainly understand why people love his work. The paintings leave me a bit unmoved as art* but they certainly work well in this exhibit since they illustrate the history of the game and frequently lavish attention on the New York ballparks in the backgrounds.

*This is probably not-that-latent art snobbery on my part but while I can appreciate the craft of the work there’s something about the palpable nostalgia that the paintings evoke coupled with the fact that large realistic oil paintings haven’t been my art museum jam for decades that leaves me with a “that’s nice” reaction. I do however love the idea of these paintings as postcards or trading cards so it’s possible that there’s something to the scale of the pieces that I’m also responding to.

The show finished up with a nice wall of trading cards depicting every New York player who was born in another country.  Ralph detailed a lot of this collection already but it’s just a fun wall to browse over and see how different countries appear and how much more diverse the game has gotten in the past couple decades.

I was pleased to see that Adonis Rosa made the cut since he had only played one game for the Yankees last season. I also remarked that Ralph was lucky that Johnnie Williams played for the Tigers since he was born in the Kingdom of Hawaii and probably wouldn’t have been an obvious non-USA player. I love the research that went into putting the checklist together for the wall.

A shame that the last week of this show got stomped by a viral outbreak since it was well worth the visit. I’m hoping Ralph gets a chance to mount it again since I think my ids would really dig it too.

7 thoughts on “Home Base”