After checking out Ralph’s exhibition at Queens College I wandered through the rain up to Flushing Meadows/Corona Park. Not the best day for it but I did get pretty much the whole park to myself as a result. Nice to wander around and take photos* even though I did the tourist thing and only took photos of the obvious stuff.

*Film will be processed and scanned eventually.

Sort of figures that the only photo I really like so far is from my phone. I really should get a proper panoramic camera some day but for now this will have to do. The nice thing with a rainy day is that all the blue-painted, drained reflecting pools photograph like water in black and white. 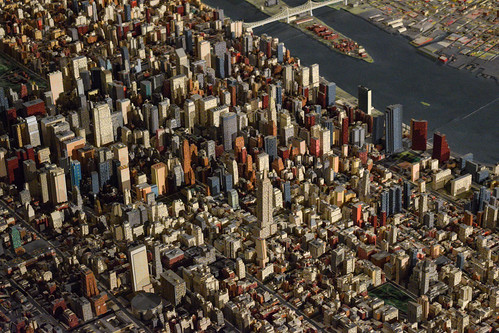 Anyway the main reason I was in the park was to visit the Queens Museum. I’ve known about the panorama for a long time—to the point where I don’t know where I even learned about it—and have wanted to see it for years but recently reading Wonderstruck sort of encouraged me to find an excuse to get out there.

It’s as cool as I was expecting and reminded me of the Bay Model except without any actual water. Even with maps it’s hard to truly understand the scale of an area like New York City or the San Francisco Bay Area. Something about a model version really puts things into a different perspective. You walk in nice and close to Manhattan so you can see the building details and then gradually spiral up and around Staten Island, Brooklyn, and Queens. It’s not quite Peter Pan’s flight but there are elements of the same magic at play.

One of the interesting things for me to discover about he Panorama is that it’s a living model and has been updated every decade or so with new construction. Instead of getting a view of what New York was like in 1964, the buildings are current as of 2009. I really hope that the changes to the panorama have been documented since that’s an exhibit I’d love to see. 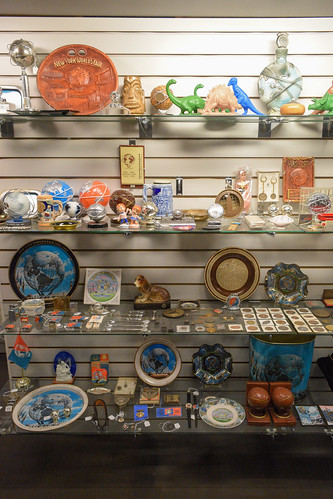 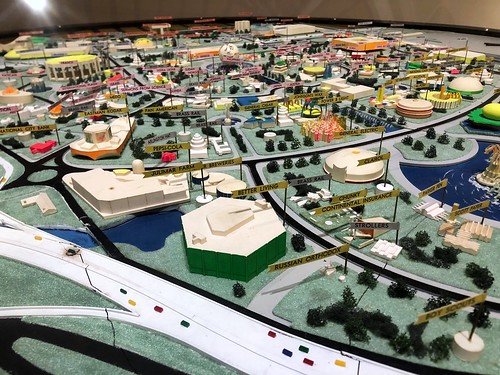 The Panorama is not the only thing from the 1964 World’s Fair on display. There’s also a gallery of ephemera and artifacts from the fair. Smashed pennies and other souvenirs. Models of various pavilions and displays. It’s a fun time capsule of mid-century futurism which is simultaneously nostalgic and still aspirational.

For many of the same reasons why I love Disneyland, I find myself liking a lot of the 1964 World’s Fair. The dated innocence of the utopian future that it imagines is still comforting. Monoculture hasn’t taken over the United States, let alone the world. I know we still have World’s Fairs of sorts but my entire life has been spent in a world that had gotten too small for those fairs.

On the Disney topic, even though I’ve never ridden the Carousel of Progress, I know what it is and was happy to see a large model of it. I also had to pick the angle of my photo of the fair model to show the GE pavilion where the Carousel was located as well as the Pepsi pavilion which housed It’s a Small World. I found it curious that neither of those connections were called out anywhere in the display but you can clearly see in the model how the Pepsi pavilion is shaped exactly like the ride.

The Queens museum also has something that could be considered the 1939 World’s Fair version of the Panorama. In this case it’s a model of the New York City water supply. This model ended up being too large to be displayed in 1939 but is absolutely wonderful.

Like the Panorama, there’s something transformative about seeing a model of where all the water comes from which puts the scale of the operation into perspective. Manhattan is so small and water comes from reservoirs which 100 miles away. The green lights which track the paths of the aqueducts and the way those lights don’t just go downhill is the kind of thing that this Californian appreciates.

I get the sense on the East Coast that water frequently gets taken for granted here. Even though droughts aren’t really a thing, knowing where your water comes from and how far away that is is always an important thing to be aware of. 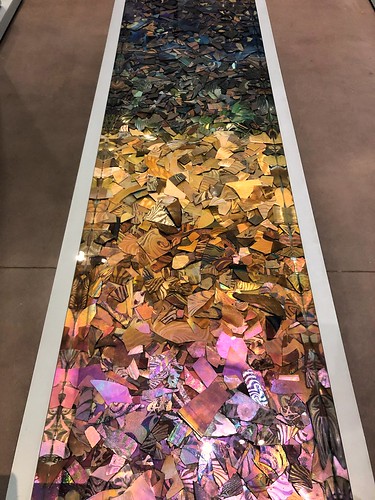 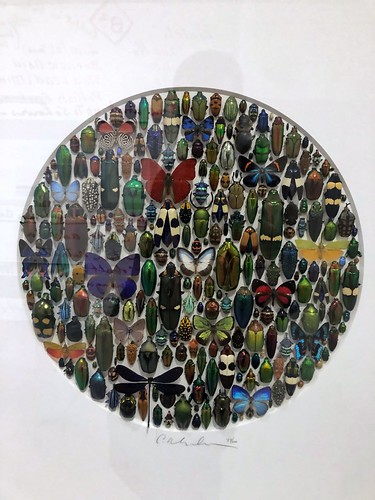 The last exhibit on display was a room of Tiffany lamps with a special emphasis on iridescence and how pieces were constructed. The construction details mirror a lot of the displays I’ve seen at The Met but the physics behind about how the effects work were new to me* and the videos showing the glass construction were a lot of fun to watch.

*Thin films reflect light from both the front and back surfaces and results in interference effects that break up the spectrum.

There were a lot of nice lamps as well but it was all the leftover materials that were wonderful to see and made me appreciate the products even more.

All in all a fun visit to the museum. I’m glad I went and kind of want to take the kids there once they’ve gathered a greater understanding of New York.

One thought on “Queens Museum”