So I mentioned this in my post about my mail day from Jeff Katz but it warrants a post of its own. I don’t have the time, money, or desire to build complete sets of Topps cards. At the same time, as a Giants collector, I often feel like I’m missing a lot of the experience of seeing a set. All the teams. All the different colors. There’s something about seeing the mix of cards that reminds me of the pleasure of thumbing through a random pack.

Anyway with the color-centric sets I’ve decided to take a quick look through the designs and list the different colors. One of the things I’ve been fascinated with is how Topps uses the same printer-simple colors over and over again. Cyan, Magenta, Yellow, Black, Red, Green, and Purple aren’t the only colors but they’re the easiest to print and as such, represent Topps’s go-to palette year after year. 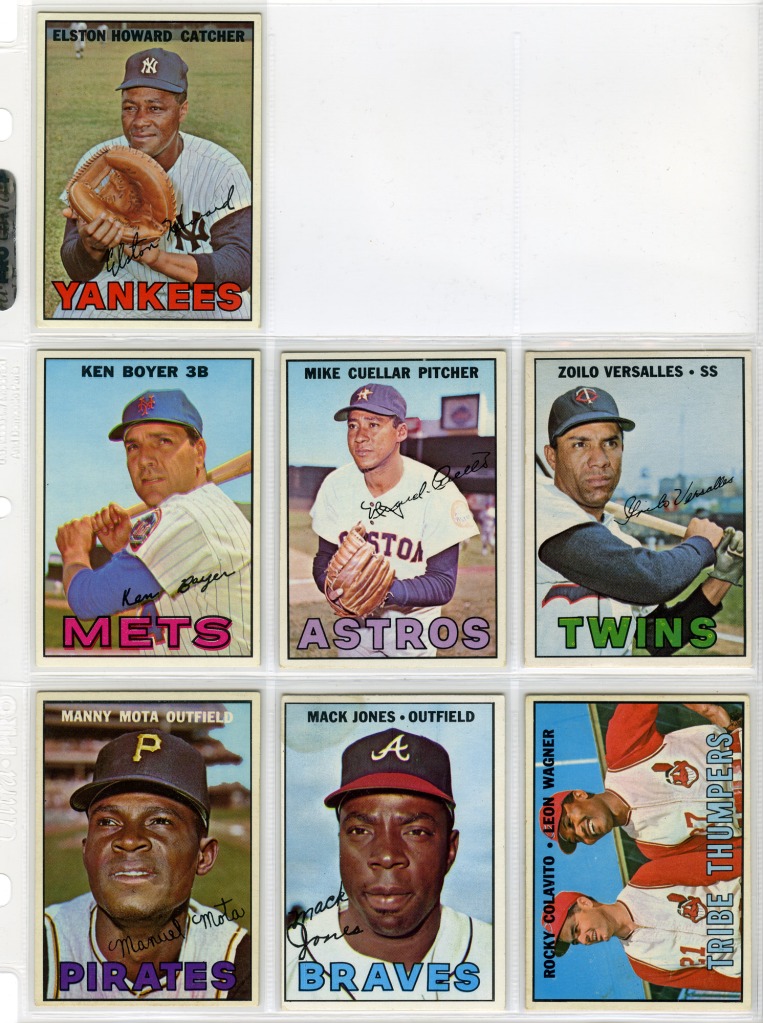 We’ll start with the 1967 page since it’s the one that Jeff gave me the kick in the pants to begin with. I’m only missing orange and yellow but I’d also like to replace the light blue with a vertical card.

My biggest problem here is that both teams with cyan names are teams that I’ve been putting in another binder. The 1967 Athletics are the last year in Kansas City . The 1967 Braves meanwhile are the first cards to really show the Atlanta uniforms. This will probably be a Brave but I’ll have to get more 67 Braves or some later-series 1966s which show the uniform first. 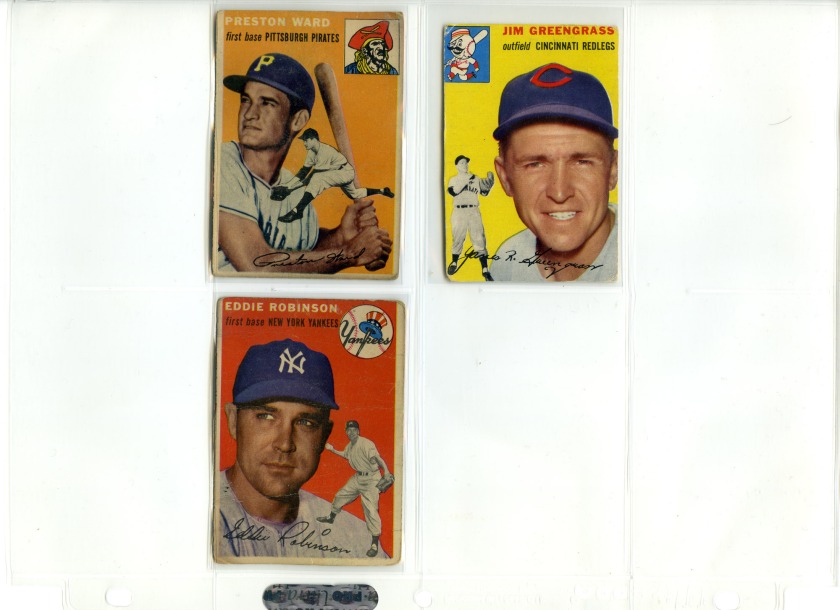 I also mentioned something similar to this project when Lanny sent me a bunch of 1954 Topps. 1954 only features six colors (red, orange, yellow, green, blue, and white) and this is the state of the color page right now. I’d like to replace the Greengrass with something non-trimmed. The blue Lepcio got sent off to a Red Sox collector because I don’t need specific players I just want the color. And I don’t have any white cards that aren’t Giants (or Del Baker). So yeah I’m looking for yellow, green, blue, and white here.

1955 features red, yellow, green, and blue backgrounds. I haven’t looked into the color combinations and whether there are a couple different ones per background but if there are that would suggest filling an 8-pocket page with two cards of each background color.

Getting to pages which I have at least one card for. I clearly don’t have a lot of 1959s. Aside from green and cyan (which I’d like to replace with a non-Giant) I need magenta, red, orange, yellow, light blue, light green, and black. The bright colors in this though make this a page I’m already looking forward to completing.

I don’t have a page for 1960 (no extra cards) nor have I even planned it out since there are so many combinations that I haven’t figured out what would be representative.

1961 isn’t really a color set (same reason why I don’t have 1957 in the project) and also features the color combination problem of 1960. I do have a bunch of these though so I may put a page together anyway.

1962 has no color at all though so it’s definitely not relevant for this project.

1963 is super colorful. At first I thought it was like 1960 and 1961 in that it has a ton of combinations but when I took a quick look though it ended up looking like there weren’t even enough to fill a page. These are the six I have. There’s also a green/yellow and green/blue designs I don’t have.

As usual I’d like to replace the Giants card but blue/orange doesn’t seem to be as commonly used. Also that Marty Keough is pretty rough even for my standards.

1964 is another set I don’t have any cards for and haven’t done the research into how many different colors and combinations are used.

1965 is another page that’s going to look great. Colors I’m missing: magenta, green, light green, cyan, and light cyan. There are also grey cards but those will be the odd man out since I already have black in the center.

1966 should also look good. I’m missing red, orange, yellow, green, cyan, purple, and grey. Not sure what color I’ll drop this time. Might be the light purple though since it doesn’t quite fit the wheel concept.

My 1968 page is complete. Would be nice to upgrade individual cards to be hatted photos so they’re better representations of the set. Also wouldn’t mind replacing the Bill Henry with a non-Giant.

I especially like how this one lays out on the page though. Left side is 100% magenta. Bottom row is 100% cyan. Top row and right side are 100% yellow.

Do I plan on continuing this into the 70s and 80s? Yes. But those sets are tougher and I’ve got another project that I’m working on for those years.

This next section will be updated as I work on this project. Any color that’s been is one I have. Any color in grey is one I have but wouldn’t mind trading out. Please let me know if I’ve missed anything.