Kind of funny. For the past month I’ve not gotten any mail on Saturdays. It’s weird when that happens since I keep thinking mail is arriving super late instead and end up checking every hour until it gets dark. I began to think that Saturdays were only for packages and that regular letters and junk mail would wait until Monday.

Then last Saturday I got a regular delivery. And then on Sunday I woke up to find another delivery in my box which suggests that I was both correct to check for late deliveries and that of course the one day I didn’t check for a late delivery is the day I left packages on my doorstep overnight.

Anyway one of those packages was a box from Marc Brubaker. Yeah, a box. I’ve gotten boxes from Marc before but between the complete absence of baseball and much-decreased access to product the past couple months have been all about surprise plain white envelopes—something at which Marc excels. 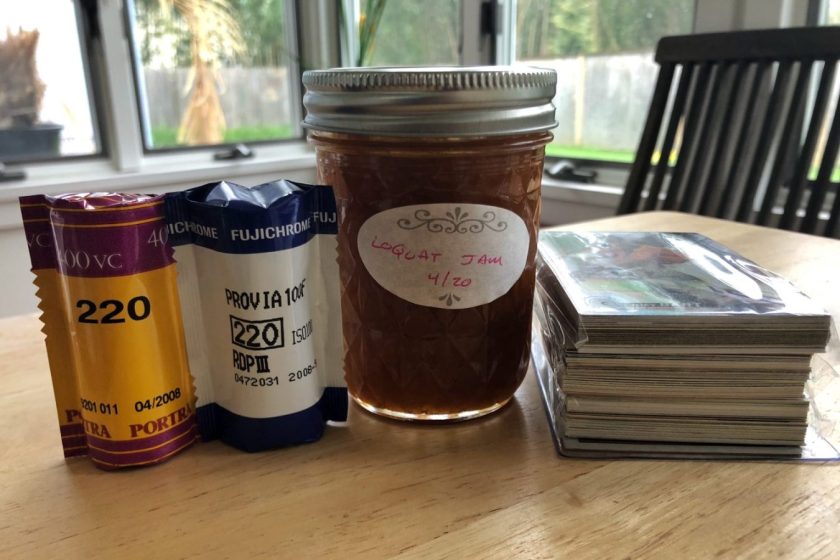 So I opened it up and found that it wasn’t a box of cards. Yes there were cards inside but also two rolls of film and a jar of loquat jelly from his recent bounty. Film is much appreciated though I haven’t had a chance to go out for a photowalk in a long time. Heck I’m still working my way through a roll of 220 from my last mailing of film. I’m pretty sure it’s Portra 400 and at this point I hope it is since I’m exposing it as if it is.

And the jelly will be great. We’ve been making lots of pancakes and it’s great to change things up with different toppings. As someone who grew up with loquat trees in his backyard this will be a great taste to introduce to the kids as well. I’d love to be able to find them out here in New Jersey but they don’t seem to be able to survive our winters. 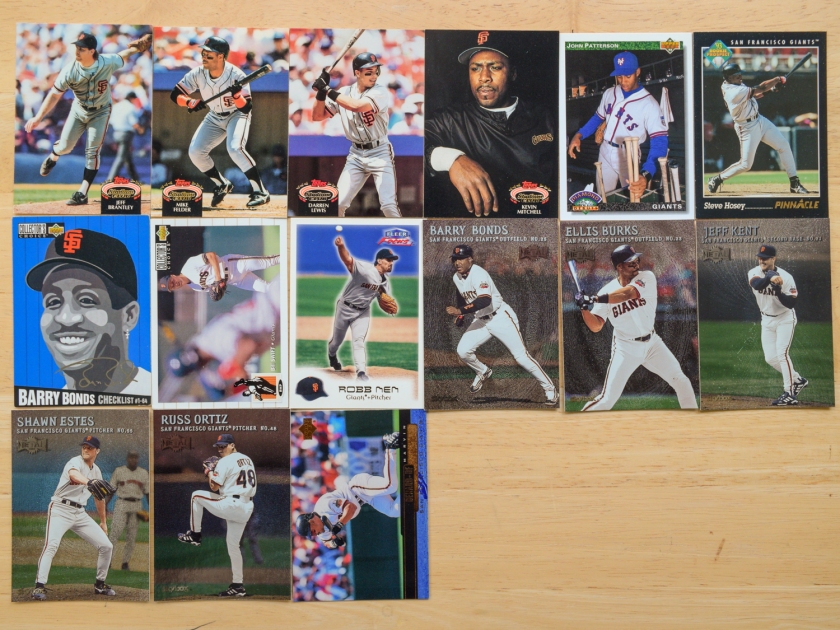 And yes there was also a surprising amount of cards—three team bags worth—in the box. The usual assortment of Giants, Stanford, and randoms so let’s start with the Giants. I’m continuously amazed at how I can discover new sets that were released in the 1990s and 2000s.

With the 1980s at least the sets I’ve never heard of are regional releases. In the 1990s and 2000s though there are so many big releases that I just can’t keep track. The 2000 Metal cards here are one such set that I’d just never seen. Not as over-the-top as the earlier Metal cards which remain some of the craziest cards I’ve ever seen but still an interesting finish to the card surface which remains unlike anything being produced now.

A couple other cards to note are the Pinnacle Steve Hosey and Silver signature Barry Bonds which both fill holes in sets that I only ver purchased a single pack of as a kid. The 1992 John Patterson meanwhile fills a nice hole since I have that card in my autograph binder.

There was also a lot of Gypsy Queen. I’m happy other people buy this product and send me Giants because I will never spend money on these. Same goes with Gallery. They add a bit of variety to the binder but a little bit goes a long long way. And that the Brandon Belt card is one of those fancy framed variants that always interests me from a production point of view.

The super-sparkly (or whatever this is called) Tyler Beede is a similar addition. I don’t chase these cards either and kind of hate all the insert variants. But I do enjoy adding the splash of interest to a binder page.

I do like the Wilhelm Distinguished Service card. Military service is an interesting and different way to build a checklist. Where my parents’ generation grew up seeing military service listed in the statistics of many players, by the time I was a kid that was all a thing of the past.

The Pinnacle Tim Lincecum is kind of nice too. It’s weird. 2013 Panini had a bunch of one-year-wonder sets that are more interesting than most of what has become their standard releases. My understanding is that sets like Pinnacle and Hometown Heroes caused collectors to take Pinnacle seriously yet neither of those sets were ever released again. 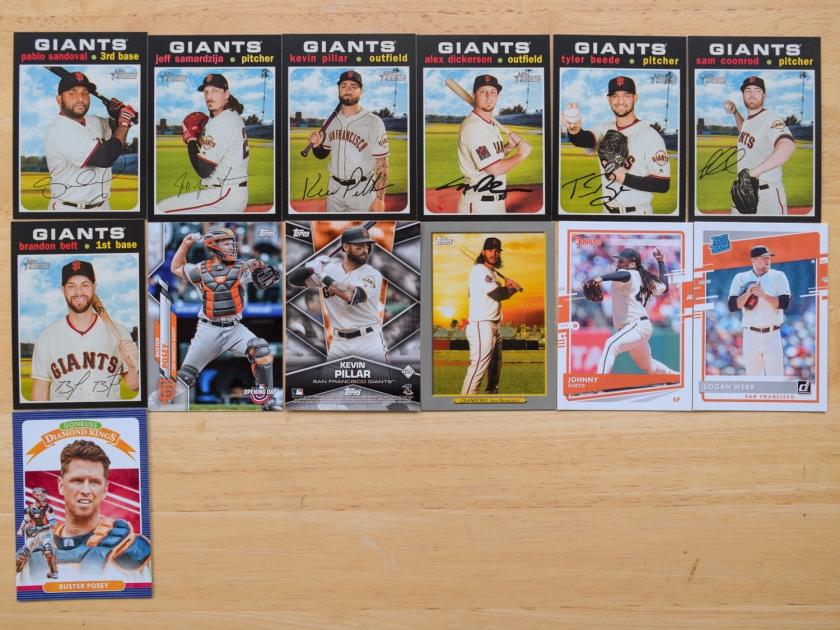 To the 2020 cards. Marc’s been surprisingly active acquiring cards this year. We’ve got Heritage, Opening Day, Stickers, Flagship, and Donruss all represented. Meanwhile it’s been over two months since I even set foot in a store which stocks cards.

This completes my Heritage team set (well except for the Yastrzemski shortprint) and gives me my first taste of Opening Day, Stickers, and Donruss. I can see why people like this year’s Donruss set. Logolessness aside it’s come into its own and has a clean, generic 1990sish design. Still a little too reminiscent of the Donruss designs from 2014 to 2017 for me but it at least knows what it’s doing now.

A batch of Stanford guys which features some more 2000 Metal as well as a couple other cards I don’t have yet. Some of those, like the 1989 Score Traded Mike Aldrete, are sort of surprising omissions. Others such as the Appell, Hutchinson, and Mussina are the kind of things I never search for but love to add to the binder. 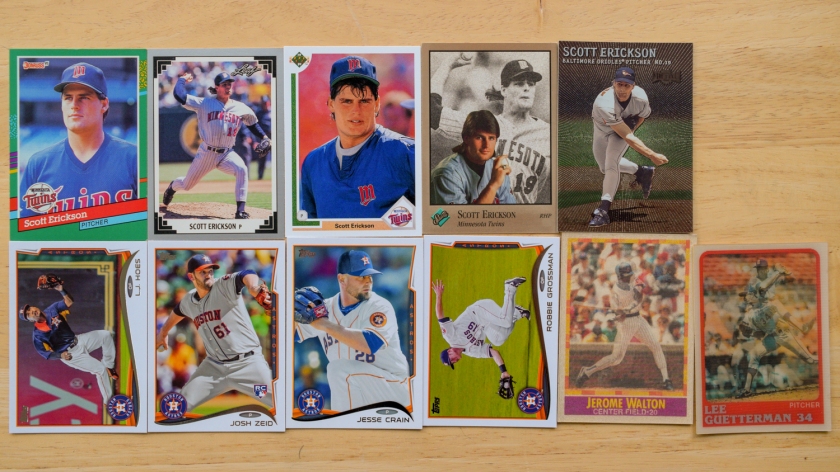 Marc also went ahead and attacked some of my smaller projects. A handful of Scott Erickson cards. Four 2014 Topps for the setbuild. Two Sportflics cards for the action binder. All quite welcome and evidence of someone clicking down through the searchlists.

And finally the last handful of cards Marc includes are always a bit of a puzzle for me. Stanford Jenning is clearly a joke. Yes I laughed.

The rest though I’m not so sure about. I thought at first that the Ruth was for my photographer binder but there’s no photographer credited. The two Muñoz cards though I’m genuinely confused by. I’ll keep thinking about it ad maybe it’ll come to me.

Thanks Marc! Stay safe out there.